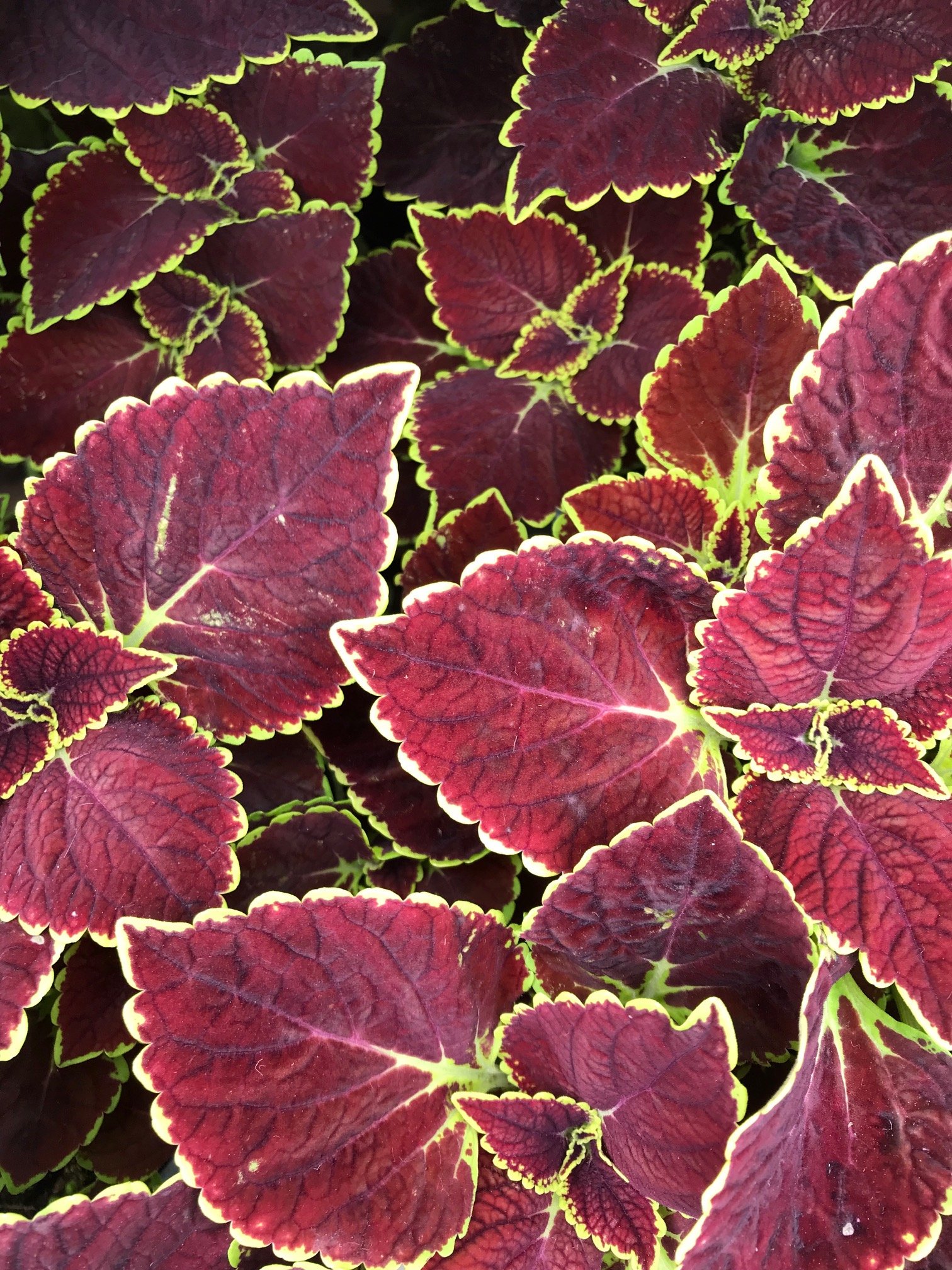 Situate a Coleus in a relatively bright location that offers several hours of off-peak sunlight. Gentle exposure to the sun will not only reduce the risk of over-watering, but it'll also maintain the colourful variegations of its foliage. Due to its intolerance to low light, situations where a newspaper can’t be read without the use of artificial light, must be avoided at all costs.

As Coleus require good levels of light, its soil will dry out rather quickly. Aim to water once the top third dries out, preventing the risk of dehydration. The combination of prolonged droughts and extended periods in direct light will result in sun-scorch and terminal damage to its leaves. Reduce waters slightly in the autumn and winter months to replicate its dormancy. Under-watering symptoms include a loss of older leaves, stunted growth, yellowed foliage and wilting. Over-watering symptoms include yellowed lower leaves, a rotten stem, and for severe cases, wilting with mouldy soil. For situations where its base or roots have become rotten, click on this link!

Average room humidity is best, as over-misting may cause the development of powdery mildew or botrytis. At monthly intervals, perform a gentle hose-down to hydrate its leaves and reduce the number of dust particles resting on its foliage.

If you're interested in achieving flowers, use a fertiliser high in potassium ('Tomato' labelled feed is ideal) for the stimulation of flower buds - just remember that most species will begin to decline shortly after blooming.

Root rot is a common issue among specimens sat in too dark environments with prolonged soil moisture. Symptoms include rapidly yellowing leaves, mouldy soil, stunted growth and a rotten brown base. Take the plant out of the pot and inspect health below the soil line. If the roots sport a yellow tinge, you're good to go, but if they're brown and mushy, action must be taken immediately. Learn more about addressing root rot on this link. 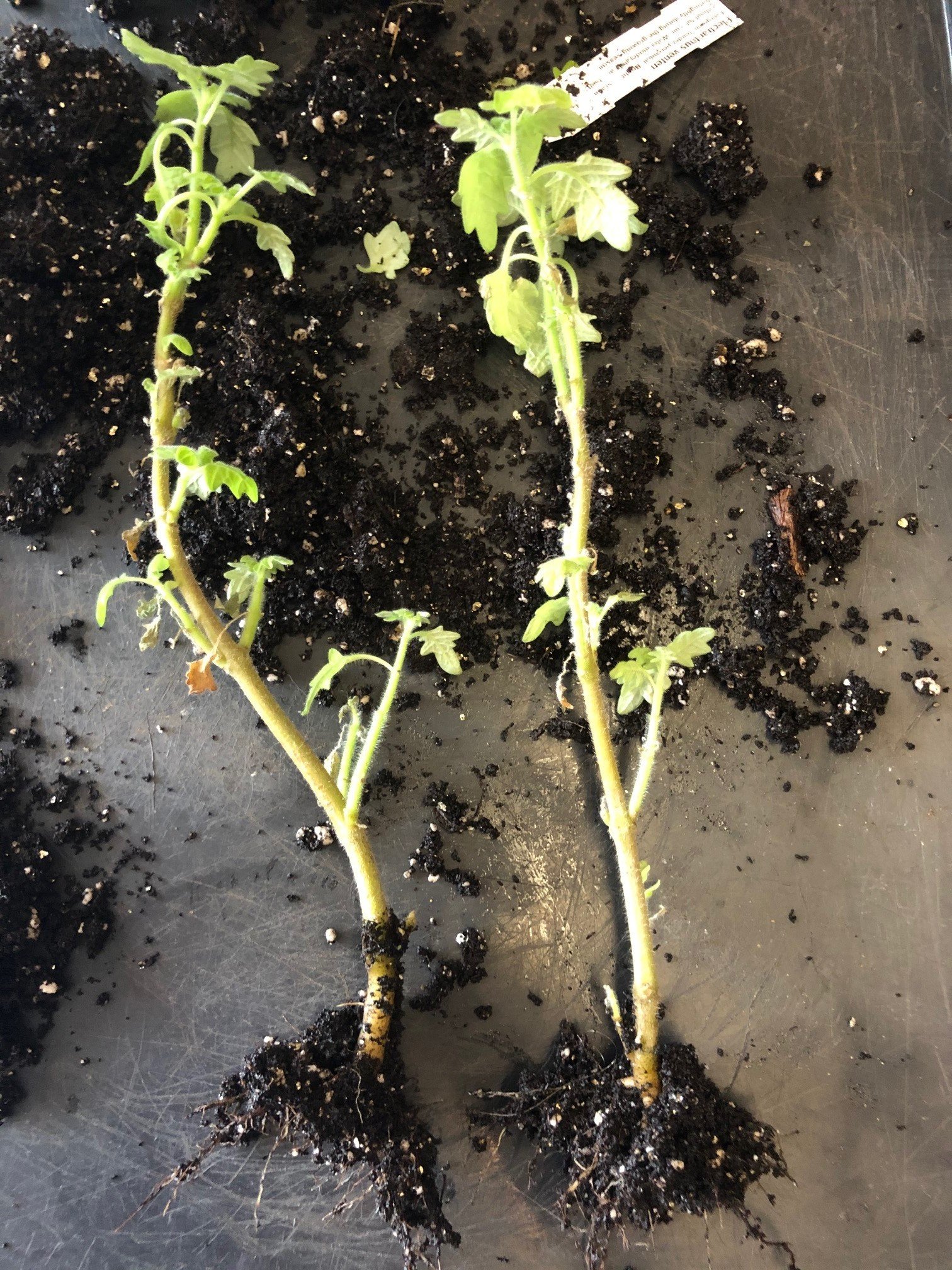 Two Plectranthus venteri specimens that have endured extended periods of soggy soil, that have, in turn, resulted in root rot. Their symptoms were yellowing lower leaves, stunted growth & too heavy soil. 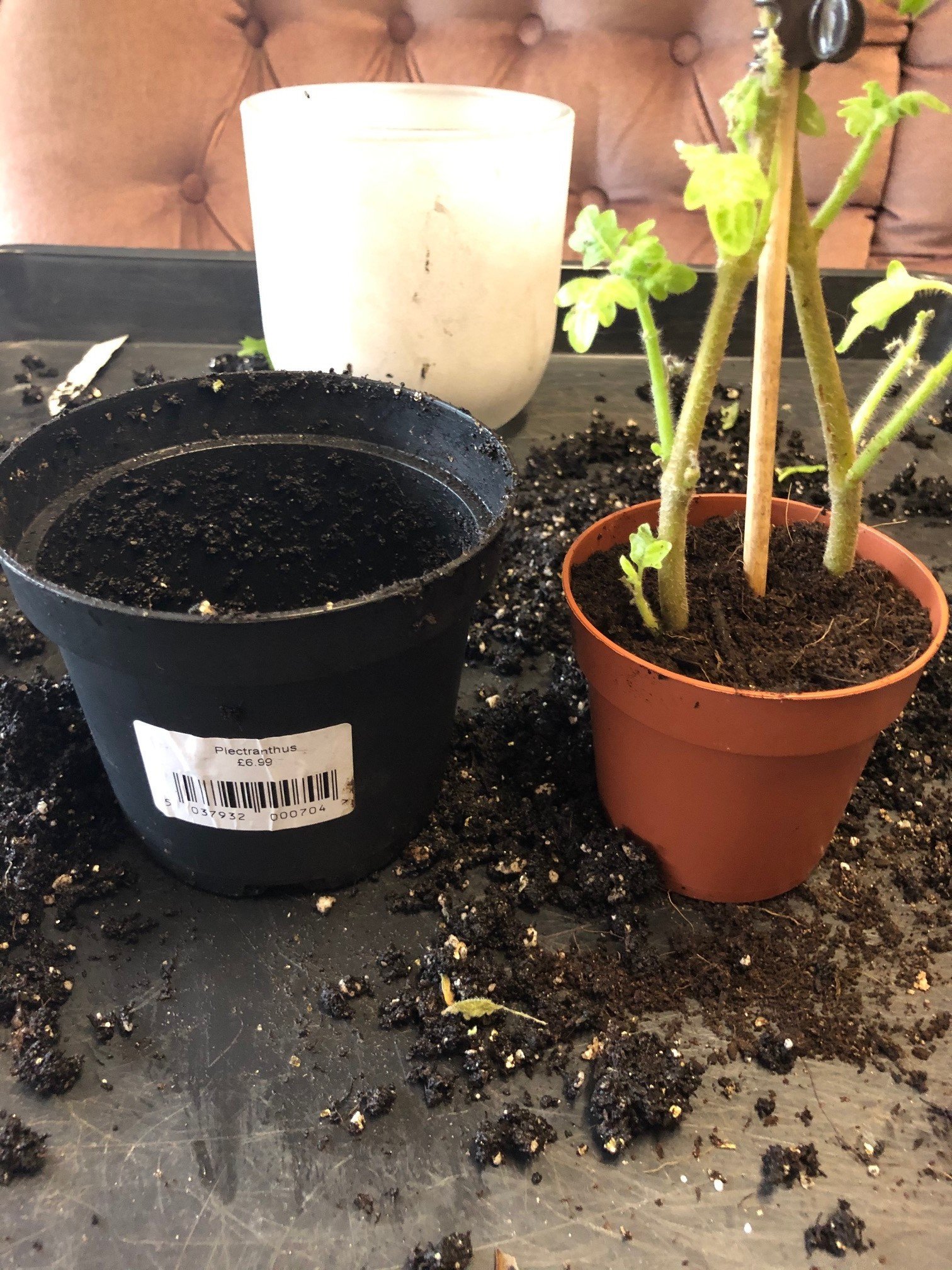 In some cases where a root system has significantly reduced in size, a smaller pot may need to be used to downplay the risk of over-potting.

Curled leaves and dried brown edges are the result of too little water and over-exposure to the sun. Although Coleus can naturally do well in sun-filled locations, those that haven't acclimatised to the harsh rays will show signs of sun-scorch and environmental shock. Prolonged exposure will significantly speed the process of dehydration, so consider transplantation into a bigger pot in the spring to wrap the roots around moister soil.

When a Coleus is severely dehydrated, most of its leaves will crisp-up and fall off - leaving you with a naked plant. Although it may spell the end of juvenile plantlets, there may still be light at the end of the tunnel for more established specimens. If its stem is still plump without any signs of retraction, prune-away the severely affected areas and contain the plant (with its pot) in a transparent bag that has small holes. Keep the soil continually moist, providing a good level of indirect light and temperatures above 15°C (59°F). After a few weeks, new life will form in the nodal junctions on the stems, signalling the start of its recovery process. Maintain a sealed environment for the following month until you feel it's necessary to release it back into the open air. For the prevention of environmental shock, be sure to introduce a humidity tray for higher levels of atmospheric moisture around the plant in its new setting. Not only will this ease the specimen back into healthy functioning life, but it'll also reduce the rate of transpiration (water-loss in the leaves), and therefore downplay the risk of dehydration and further decline.

A steady loss of foliage during the autumn & winter, or shortly after flowering, shouldn't cause concern as the specimen is entering its dormancy. Instead of manual pruning its body, allow the plant to drop its leaves naturally to decrease the risk of shock. Puncturing healthy tissue also may result in a bacteria infection in the wound that can quickly spread across the whole plant. Once the shedding of leaves has elapsed, relocate the specimen in a location that offers bright, indirect light and good air circulation. Provide temperatures around 10℃ (50℉) with irregular waters until new growth appears in the spring. One way to decrease the chance of flowering in the first place (that'll result in leaf shedding afterwards) is by keeping the temperature constant throughout the year and above 18℃ (64℉) to reduce the chance of it entering a dormancy.

The taxonomy of Coleus & Plectranthus is complicated, with the latter adopting many of the former's species. The name, 'Coleus', was first coined by João de Loureiro in 1790, describing various south-east Asian perennials that sported colourful foliage and cone-shaped flower stalks. 'Plectranthus', on the other hand, was first penned two years earlier by Charles L'Héritier de Brutelle, using the Greek words for 'spur' (plektron) and 'flowers' (anthos) to describe the oddly-shaped corolla tube. 'Solenostemon' is considered synonymous to Coleus.

Since the age of genetic testing in horticulture, many of the Coleus species have landed in the latter's genus. The popularity of these plants increased over the following century, featuring in many Victorian gardens as a way to incorporate bold colours seen from above. 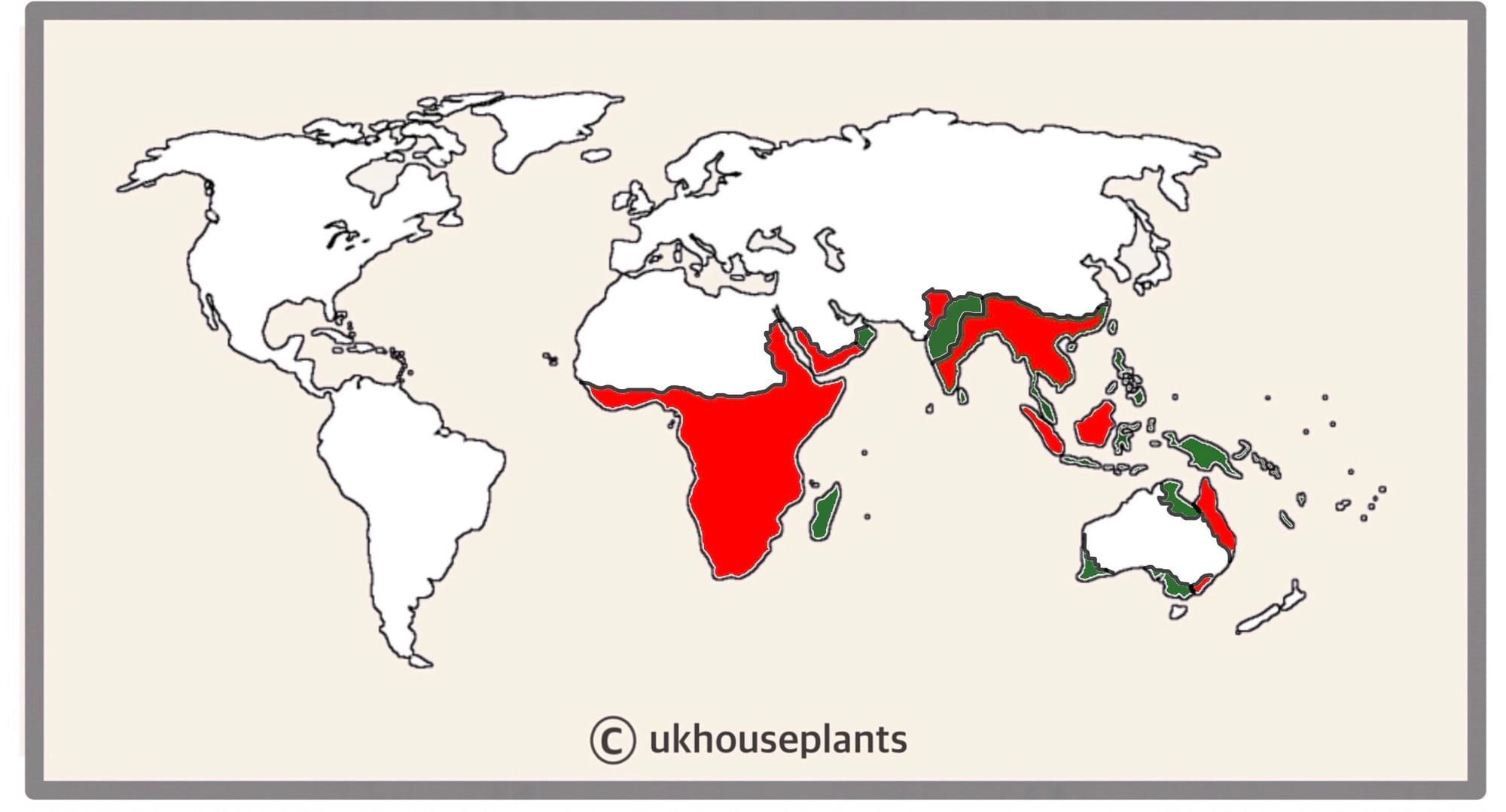 The Distribution of Plectranthus in Red  &  Coleus in Green and Red

15° - 24°C   (59° - 75°F)
H1a (Hardiness Zone 13) - Must be grown indoors to maintain foliage all year round. Although Coleus can withstand temperatures down to 8°C (46°F), they'll produce flowers and most likely die shortly afterwards as they cannot tolerate periods in the cold. If you maintain consistent temperatures of 18°C (64°F) throughout the year, you'll reduce the risk of flowers and therefore foliage loss in the autumn and winter. A domestic specimen can live for over five years indoors.

Up to 1m in height and 0.5m in width once they reach maturity. The ultimate height will take between 5 - 7 years to achieve, with up to 12cm of new growth growth per year. Those situated indoors will live for many years without the need to drop their leaves over the dormancy period.

Stem Cuttings (Difficult) can be taken at the start of spring when there's more than 10cm of semi-wooded stem. This will take a while, as the plant will need to reach a certain level of maturity before its base becomes ready. While using clean secateurs, remove the top 8cm (3 inches) of the stem just above a node and gently remove the lower leaves. Set the bottom half into water for root development. After 3cm (1 inch) of root growth, which can take several weeks, set the rooted portion into moist houseplant compost. Wrap the plant (& its pot) in a transparent bag to maintain high humidity due to the absence of roots that'll result in rapid moisture loss within the stem. Provide a bright, indirect location with continual soil moisture to quicken the rate of root development. Remove the bag after three weeks of substantial foliar growth and follow the care advice provided at the top of the article.

Spikes of tiny blue or white flowers will start to develop during mid-summer, at the terminals of each stem. Although the flowers can last over one week, it usually signals the end of the plant's life. If you're not a flowery person, it's recommended to prune the flower buds as they develop to promote longer foliar growth or keep it in a warm location all year round.

Keep an eye out for mealybugs, aphids, spider mites, whitefly, blackfly & vine weevils that'll locate themselves in the cubbyholes and undersides of the leaves, with the exception of the latter in soil. Common diseases associated with Coleus are root rot, leaf-spot disease, Peronospora, botrytis, rust, powdery or downy mildew & southern blight - click here to learn more about these issues.

B&Q,  Dobbies,  The Range,  Blue Diamond,  British Garden Centres & Online Stores. Coleus are usually sold outside during summer at most garden centres, which can be brought back indoors once checked for both pests and diseases beforehand. Provide a bright location with a splash of sunlight to limit the effects of environmental shock.