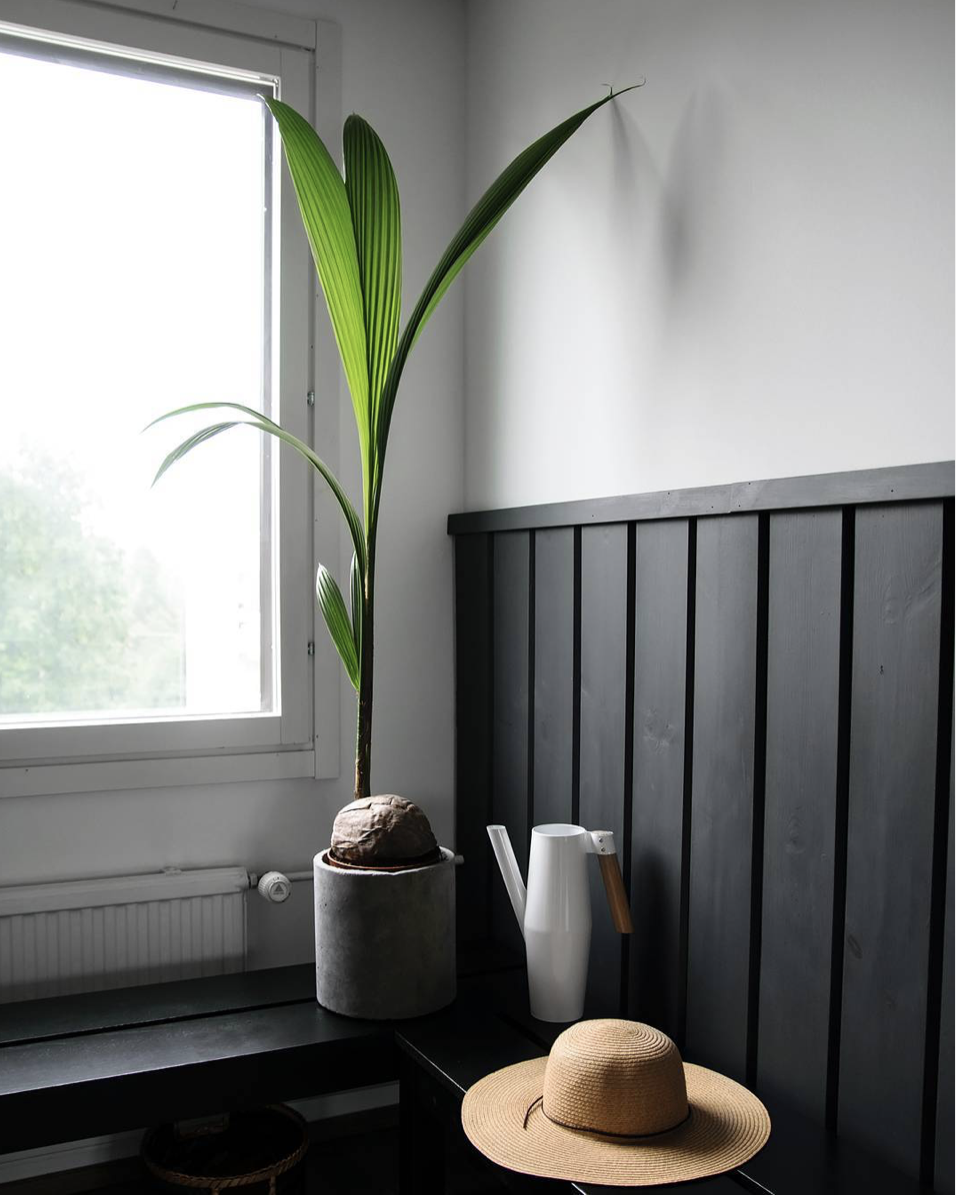 Seat the Palm in the brightest location as possible. A few hours of off-peak sunlight will be highly beneficial for the plant, as it'll significantly reduce the risk of over-watering and root rot. Coconut Palms naturally occur in sun-filled locations, so within a metre of a south-facing window or a conservatory is perfect for quality growth. Due to the species' intolerance to low light, avoid placing it in areas where a newspaper can't be read without the use of artificial light.

Over-watering is a common issue among growers. Allow the top half of the soil dry out in between waters, reducing this slightly further in the cooler months. It's important to use lukewarm water due to the root's sensitivity to cold temperatures - if it's too cold for teeth, it'll too cold for the Palm, too! Over-watering symptoms include a rotting stem, little to no growth and yellowing leaves; these issues are usually due to a lack of heat or sunlight, over-potted roots, an incorrect soil type or water-logging. Alternatively, under-watering and dehydration symptoms including yellow or pale fronds, little to no growth, brown crispy new growth and gradual decline. These issues are commonly caused by forgetfulness, being potbound or situated in too much light/heat. If it's placed in a bright location with a splash of sun, be sure to keep the soil adequately moist as prolonged dehydration will hinder new growth for a while.

Coconut Palms love humidity, so creating a pebble tray is the best way to improve the surrounding growing conditions. Throughout the year, mist both sides of leaves frequently to combat the dry air which would cause the browning of leaf-edges and weakened juvenile growth. We also recommend misting or rinsing the foliage to wash away potential Spider Mite eggs and dust, both of which will contribute to better light-capturing efficiency (& therefore better overall health). This should be done at monthly intervals, but can even be performed every fortnight as long as you avoid getting excess moisture into the soil.

A rotten or loose coconut shouldn't cause concern as it's common behaviour for a maturing specimen. If, however, your Palm is developing soil mould and is sat in heavy soil, this may be a sign of root rot. Click on the link above to learn more about eradicating this issue, and remove the coconut once it becomes loose (this may take several weeks after you address the root rot, so follow the instructions today and wait for the nut thereafter).

Too low humidity can cause browning leaf tips with yellow halos. Although this won't kill your specimen, you may want to increase the local moisture to prevent the new growth from adopting these symptoms. Mist or rinse the foliage from time to time and create a pebble tray whilst the heaters are active to create a stable environment for your specimen. 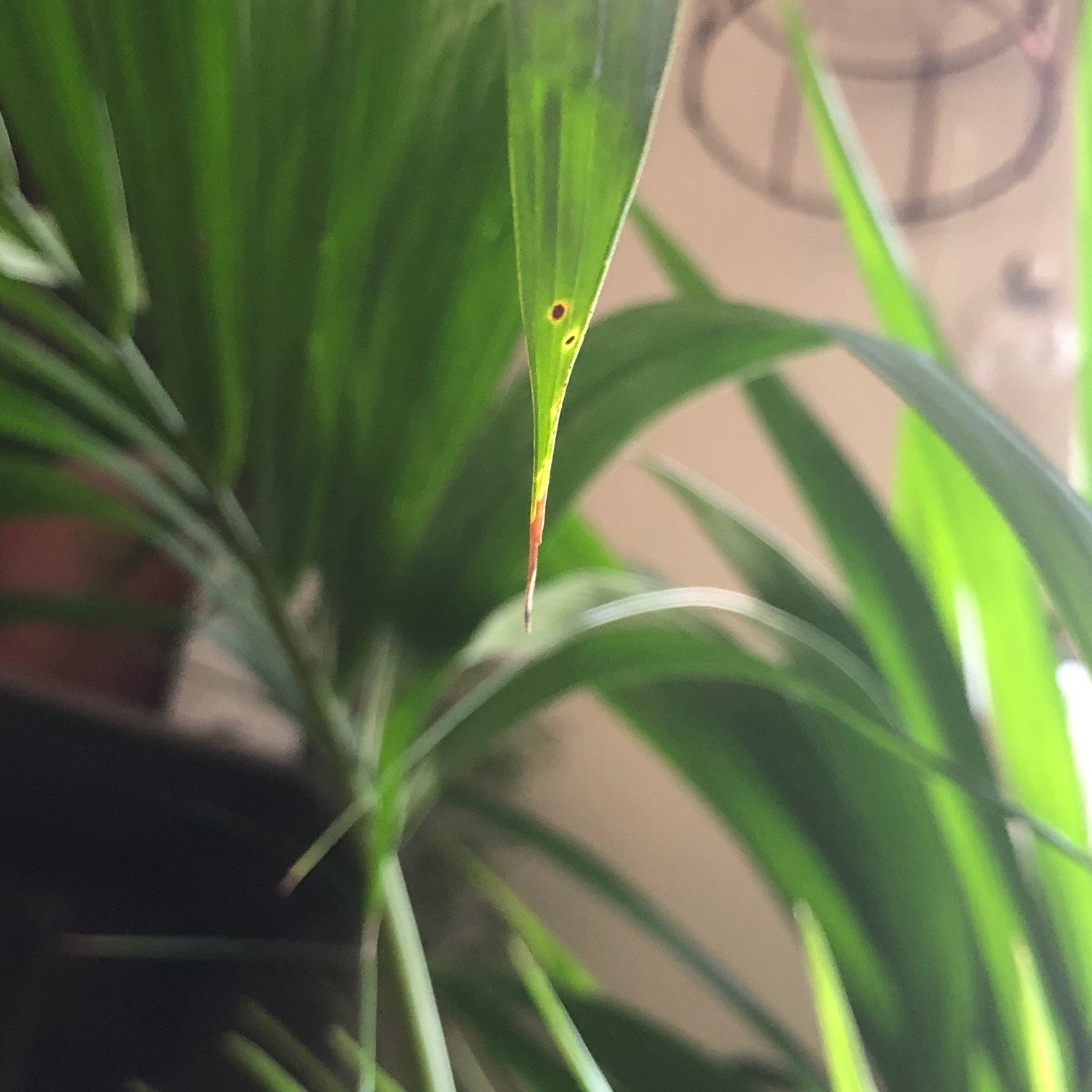 Browning leaf tips on a Kentia Palm, which has the same behaviour as Coconut Palms when exposed to low moisture. The dry air will become most prominent on the juvenile young growth of a new frond, so always introduce a pebble tray to keep the specimen happy!

Transplant shock is a big issue when it comes to heavy-handed repots. Give the plant a good soak 24hrs before the action and never tinker with the roots, unless it has been affected by root rot. Typical signs of transplant shock are largely similar to under-watering, with wilting, yellowing leaves and stunted growth among the most common symptoms. Click here to learn more about addressing transplant shock and a step-by-step guide on performing the perfect transplant. 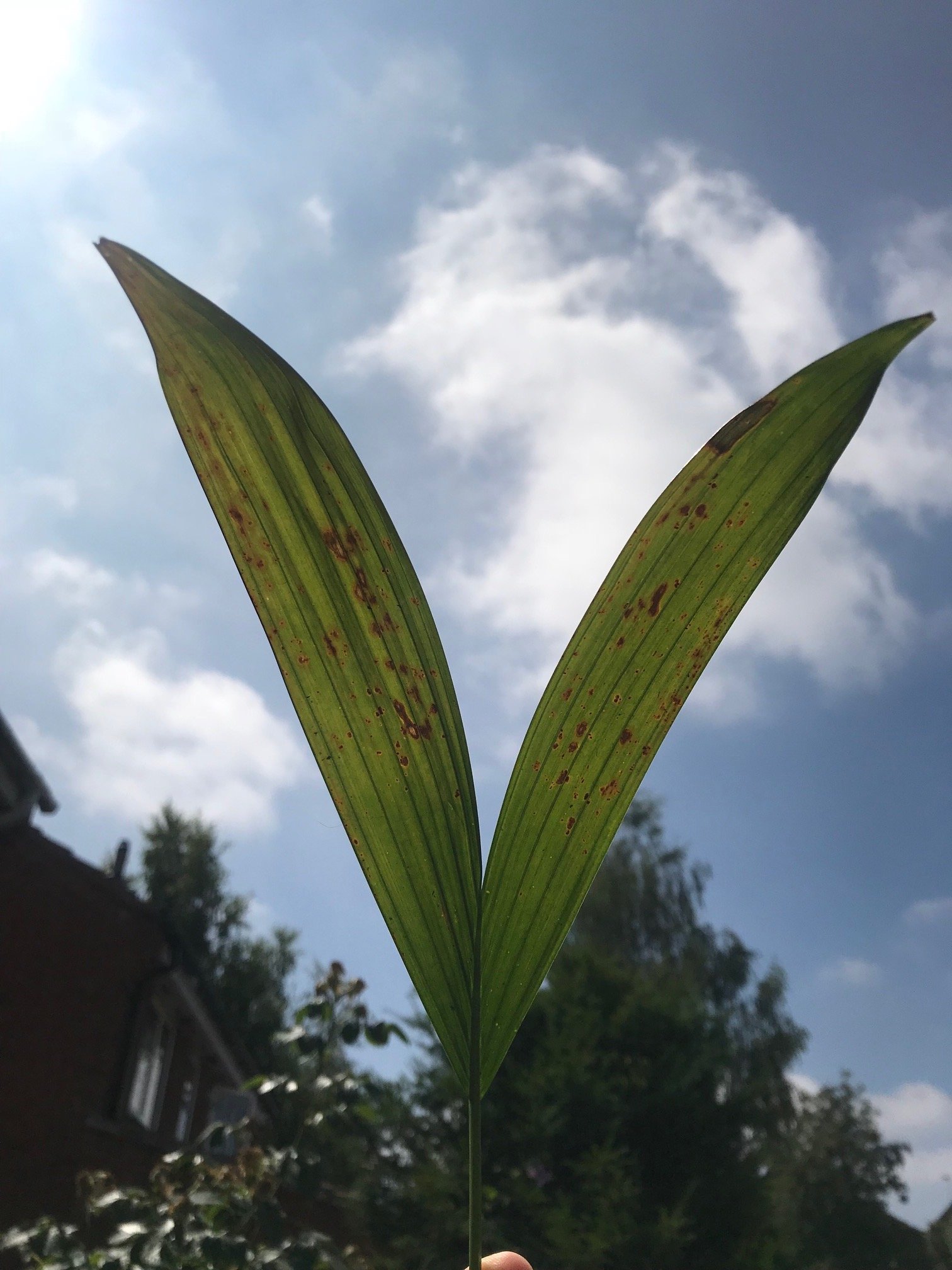 The effects of Leaf-Spot Disease. Click on the image to learn more!

The term, coconut, derives from the 16th-century Spanish word for 'skull', coco, as it resembles facial features from the plugged and functional 'pores'. The species was initially penned in Western cultures as 'nut indica' by Marco Polo in 1280, based off the Arabian word, جوز هندي, translating to 'Indian Nut'. In 1753, Carl Linnaeus reclassified the species into the newly-formed Cocos genus, acknowledging the original name of five hundred years. 'Nucifera' can be translated from modern Latin to mean 'nut-bearing'. 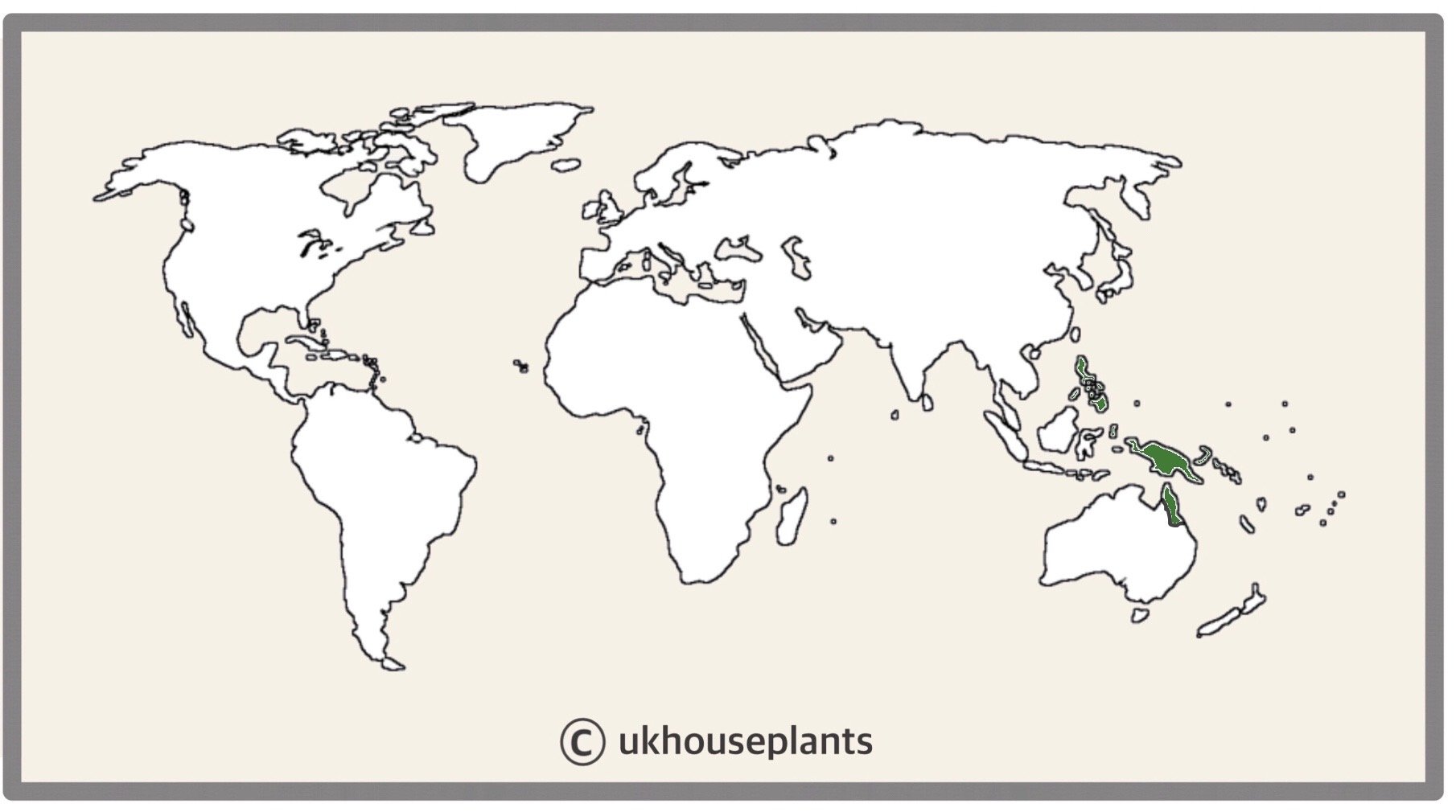 The Distribution of Cocos nucifera.

Specimens in their natural environment of the Western Pacific can reach up to 20m in height and 5m in width. The ultimate height will take between 15 - 20 years to achieve, with two new fronds put out each year. Unfortunately, the chance of a specimen lasting more than a year is highly unlikely unless it's situated in a conservatory or orangery. Keep the cleanliness of the foliage in tip-top condition, along with regular Spider Mite checks to boost its survival rates!

Remove yellow or dying leaves, and plant debris to encourage better-growing conditions. While pruning, always use clean scissors or shears to reduce the chance of bacterial and fungal diseases. Never cut through yellowed tissue as this may cause further damage in the likes of diseases or bacterial infections. Remember to make clean incisions as too-damaged wounds may shock the plant, causing weakened growth and a decline in health. Do not prise a healthy nut away from the plant's base due to the risk of bacterial infection.

Via Sowing Drupes (better known as 'nuts' or 'seeds').

Drupes (Difficult) - Obtaining a coconut is relatively easy and can be purchased from the local shop or market square. Be sure to buy one with its husk and a fair amount of contained fluid - shake it if you become unsure! Soak the drupe in lukewarm water for around three days in a bright location, before placing it sideways (around a third depth) into a bed of 'Houseplant' labelled potting mix. If you're unsure as to which angle it should be placed in, have a glance at the image below. Maintain evenly moist soil and allow the excess water to freely drain from the pot's base to prevent water-logged conditions. The ideal location for successful germination is in a bright, indirect setting with temperatures above 18℃ (64℉) with bottom-heat. Germination may take up to six months, so don't discard the drupe until this threshold has been surpassed, or it becomes rotten or mouldy. Keep the specimen in the same container for the first year of its life before repotting it not the next sized pot with a 'Houseplant' labelled potting mix! 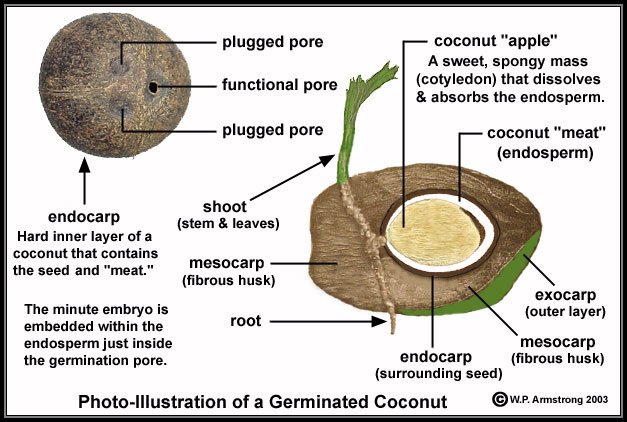 Coconut Palms will never flower indoors; however, those grown in the fresh outdoors will produce both separate male and female flowers (monoecious), blooming at slightly different times to avoid self-pollination. They'll typically flower from the start of spring, lasting several months with up to eighty flowers on mature specimens. In some cases, most commonly with dwarf varieties, specimens can become self-pollinating to increase the overall yield for the season.

It's recommended to repot your specimen as soon as it gets home as the nursery pot is usually too small for its current size. Follow the step-by-step guide and always respect the roots to avoid transplant shock!

After that, repot every three years in the spring using a 'Houseplant' labelled and the next sized pot with adequate drainage. Hydrate the plant 24hrs before tinkering with the roots to prevent the risk of transplant shock. For those that are situated in a darker location, add a thin layer of small grit in the pot's base to improve drainage and downplay over-watering. Click here for a detailed step-by-step guide on transplantation, or via this link to learn about repotting with root rot.

Keep an eye out for mealybugs, spider mites, scale & thrips that'll locate themselves in the cubbyholes and undersides of the leaves. Common diseases associated with Coconut Palms are root rot, leaf-spot disease, botrytis, powdery mildew & southern blight - click here to learn more about these issues.

Most reliably sold via online stores, but can sometimes become available at B&Q, Homebase, IKEA & Morrison's.