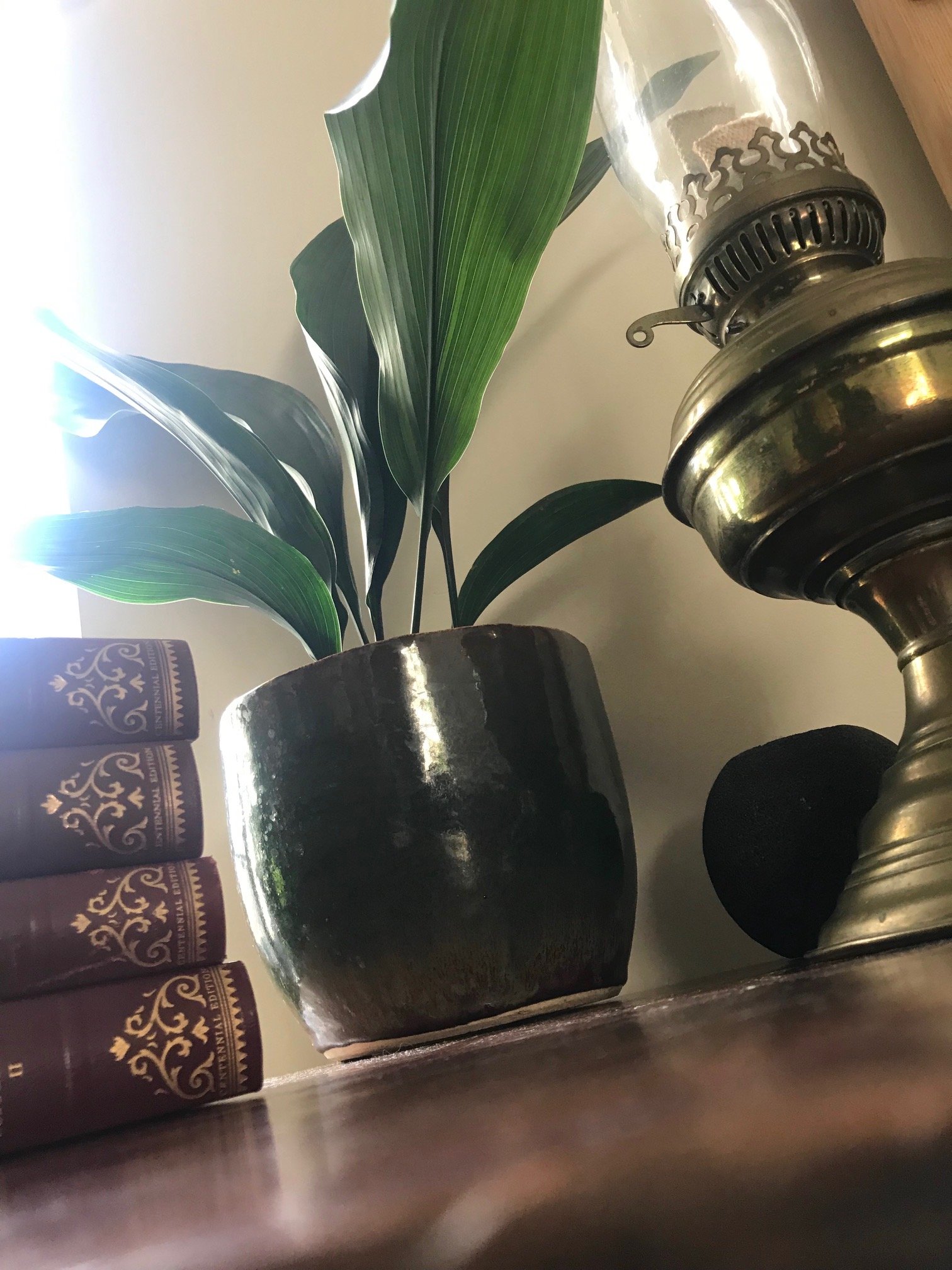 Aspidistra can withstand all ranges of indirect light, meaning that most locations in a home will be accepted. Avoid situating it in a spot that receives intense sunlight for more than an hour, as it'll quickly lead to sun-scorch and permanently damaged leaves. Clean the leaves regularly, especially with those in darker environments with lukewarm water and a damp cloth. Although this isn't too much of an issue, a build-up of dust particles can clog up the plant's pores, causing lowered light capturing-efficiency.

Allow the soil's top third to dry out in between waters, reducing this further in the autumn and winter. If your specimen is situated in a darker environment, allow half of the compost to dry out to minimise the chance of root rot and hatching Fungus Gnat larvae. Under-watering symptoms include stunted growth, browned leaf edges and yellowing leaves; these issues are commonly caused by too much sunlight or heat, or pure forgetfulness. Over-watering symptoms include a collapsed base, yellowing leaves, heavy soil and plant death. If you feel that over-watering is to blame for a gradual decline in health, be sure to click on this link for more info about addressing root rot.

Although average room humidity is acceptable for this species, those grown in a dry climate (below 40%) should be sat on a humidity tray to prevent the risk of browning leaf-tips. At monthly intervals, perform a gentle hose-down to hydrate its leaves and reduce the number of dust particles resting on its foliage.

Fertile soil is vital for a healthy Aspidistra; feed its soil once every four waters using a 'Houseplant' labelled fertiliser, before reducing this every sixth drink in the autumn and winter. Try not to over-feed as their roots are susceptible to burning, especially when over-applied in dry soil. 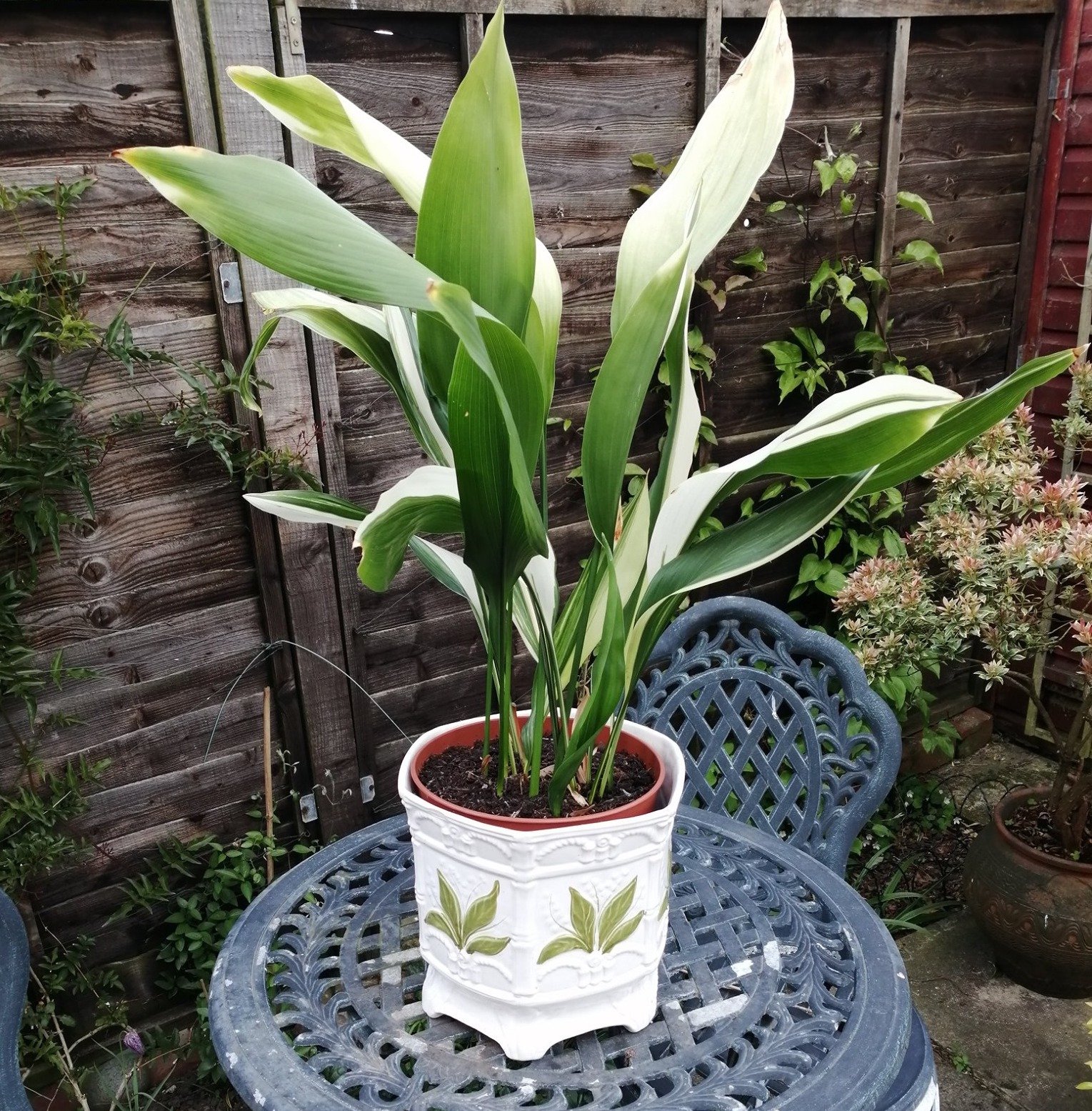 The specimen above is an Aspidistra elatior 'Variegata', sent in to us from Melanie Elliott who has grown the original cutting since 1978!

Older leaves that rapidly become yellow are a clear sign of over-watering, usually caused by too little light with other symptoms include mouldy or heavy soil, stunted growth and a rotten base. Although this species can do well in darker locations, the frequency of irrigations must be reduced to counteract the chance of root rot. People don't realise that a plant's root system needs access to oxygen too; when soil is watered, the air will travel upwards and out of the potting mix. A lack of accessible oxygen will cause them to subsequently breakdown over the oncoming days. Click on this link to learn more about root rot and how to address it.

Too low humidity will cause browning leaf tips with yellow halos. Although this won't kill the plant, increase humidity to prevent new growth in adopting these symptoms. Either mist weekly while the heaters are on, or create your humidity tray to provide a a more stable environment for your specimen.

Persistent droughts will result in crispy brown sections across its foliage. Allow the affected leaf to thoroughly brown over before removing it with a clean pair of scissors, as puncturing the soft tissue may cause bacterial diseases further down the line. Introduce a watering schedule or pebble tray to avoid the risk of dehydration in the future.

A loss of variegations is caused by too little light. Despite Aspidistra being an excellent choice for shady locations, it'll come at the cost of its variegations for multi-coloured specimens. Move the plant into a brighter area with minimal direct sunlight to allow the variegations to appear on the new growth. If you aren't entirely displeased about the loss, simply skip this step. Alternatively, extreme variegations that hinder the plant from developing chlorophyll (green pigmentation) is typically caused by too much sunlight. 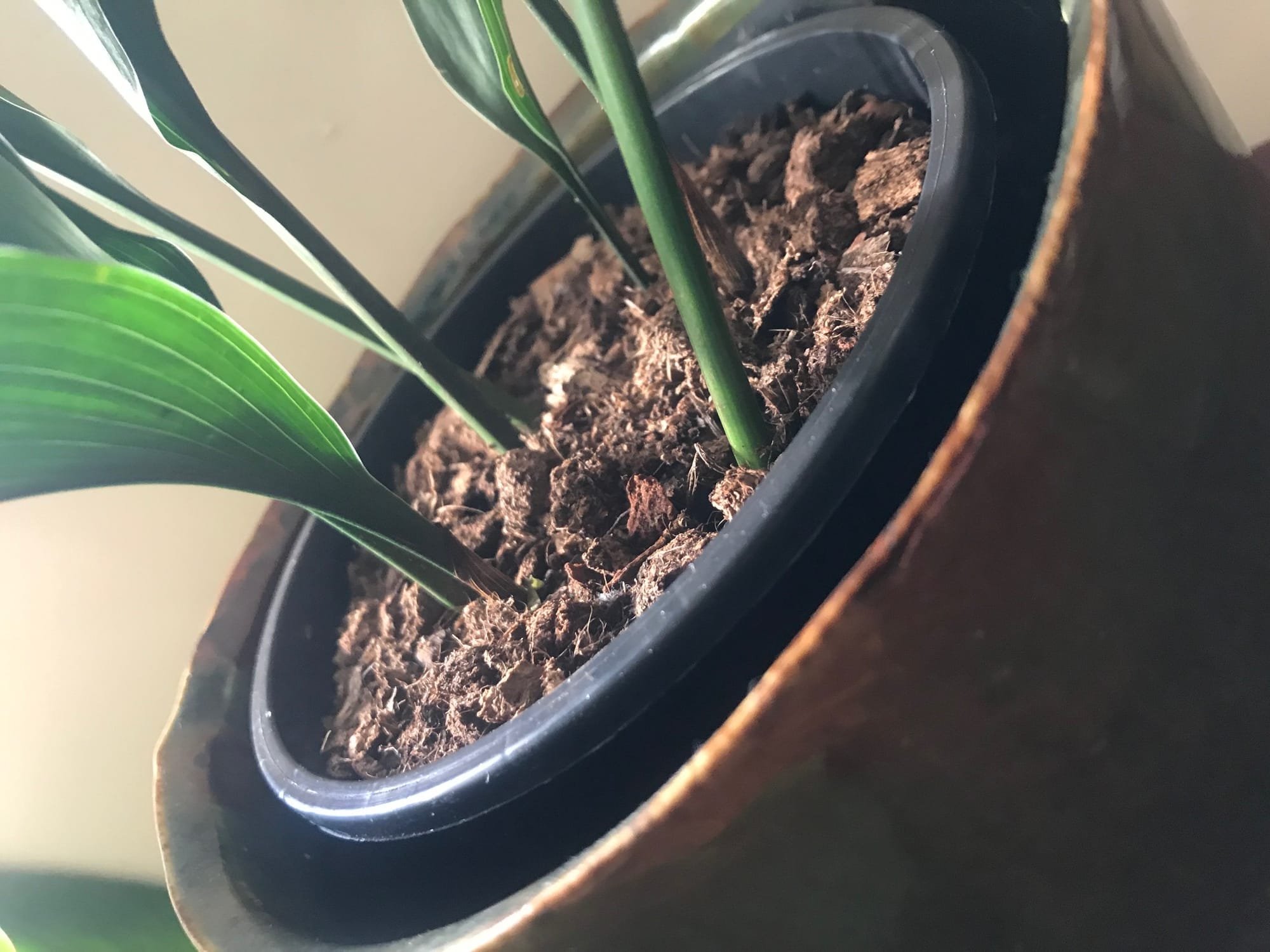 Aspidistra has a modified stem whereby rhizomes (much like the Rabbit Foot Fern or Blue Star Fern) that runs just beneath the soil line, harbouring both its petioles and roots.

John Ker Gawler first described Aspidistra in 1822, using the Greek word for 'shield' (ασπίς) and the genus name of Tupistra, in reference to its foliar structure. Despite the initial taxonomy, it was largely ignored until the 1980s, when it was correctly placed from the Lilaceae family to Asparagaceae after morphological investigation.

During the age of gas-powered lighting in the Victorian period, toxic fumes and soot-covered surfaces were a frequent scene in homes, not only causing nausea and headaches, but also intoxicating plants until death. The only two species that survived this wicked time were Kentia Palms and the newly discovered Aspidistra, illustrating great wealth and fortune when featured on family pictures. Their popularity eventually died out, with many other plants from 'The New World' being successfully grown in the homes once the lightbulb became normalised. The foliage of an Aspidistra meets at an underground 'rhizome' which acts as a stem, harbouring the roots, stored energy and petioles. The rhizomes can be propagated by division in the spring and summer, or can be left to fill the pot.

There are two species of Aspidistra that are in our homes today - the currently commercialised A. elatior, along with the lesser-known historic A. sichuanensis that sports thinner leaves compared to the former. 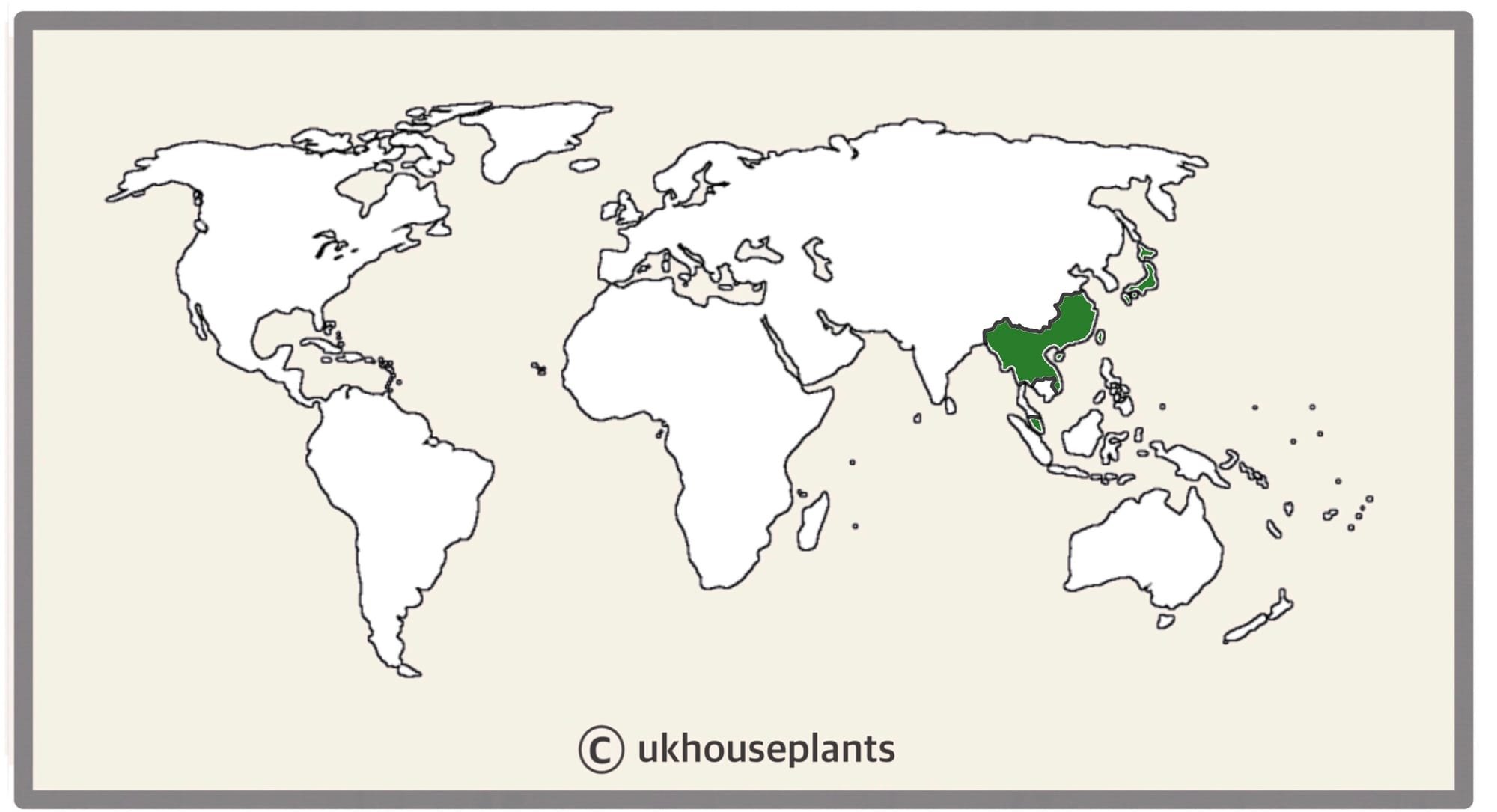 The Distribution of Aspidistra.

10° - 26°C   (50° - 80°F)
H1b  (Hardiness Zone 12)  - Can be grown outdoors during the summer in a sheltered location with temperatures above 10℃  (50℉),  but is fine to remain indoors, too. If you decide to bring this plant outdoors, don't allow it to endure any direct sunlight as it may result in sun-scorch and dehydration. Regularly keep an eye out for pests, especially when re-introducing it back indoors.

Up to 0.6m in height and 1m in width, with the ultimate height taking between 3 - 8 years to achieve. Each rhizome can produce up to three new leaves per season in the right cultivation.

Rhizome Cuttings (Easy) - Choose the healthiest, most established rhizomes that show no signs of damage or disease. This method can be taken from spring to early summer, using between two to four fronds within each rhizomatous section. Cut directly below a node using a clean knife, and separate its root systems from the rest of the root ball. Make sure the propagated rhizome is at least 5cm (2 inches) in length so that it has enough stored energy to continue growing. Place the rhizome sideways along a bed of moist 'Houseplant' labelled compost. Sprinkle a half a centimetre of soil onto of the rhizome to lock in surrounding moisture and wait for new growth that may take up to several weeks. Avoid direct sunlight and offer high humidity with temperature (15°C, 59°C) for success. After its second new leaf, treat it like a normal specimen, following the care tips above!

Matured specimens are perennial, with small purple rosette flowers emerging an inch above the soil line in spring or summer. Its blooming process has baffled botanists for many years due to its low-growing nature, a complete contrast to the preferred height of ordinary flowers to attract airborne pollinators. If pollination is successful, small red berries will form in the flower's urn, usually holding just one or two seeds. It's possible that a domestically grown specimen will bloom indoors, with those being recently repotted in the mid winter having the best chance. The flowers are primarily pollinated by flying insects, most notably Fungus Gnats. Variegated Cultivars  (Just a few of them!)

'Lennon's Song' - The green-toned foliage is slashed with thin lime stripes across its leaves. Originally selected and grown by Florida-born Robin Lennon in California from his Aspidistra fields.

'Asahi' - A white-tipped variety with the typical Aspidistra green base, separated by a mottled infusion of the two colours.

'Okame' (syn. 'Variegata) - Very popular amongst growers in the late 20th century. Foliage has wider leaves than other variegated cultivars, littered with vertical white bands from tip to rhizome.

'Sekko-kan' - An older Japanese cultivar with thin white stripes across the top half of the leaf. When matured, some of the leaf-tips may entirely become white, similar to the 'Asahi' variety. This cultivar is sometimes nicknamed the 'White Snowy Crown' Aspidistra.

'Milky Way' & 'Well Spotted' - Within the 'Sichuanenis' group and therefore sport thinner leaves than each of the cultivars above ('Elatior' group). The foliage is covered in yellow spots across the leaf, with each mottle measuring around 0.3cm in diameter. 'Milky Way' is pictured below.

'Kinboshi' - Similar to the 'Milky Way', this variety has yellow mottles but with the bonus of a lime halo across each spot. The variegations tend to be more intense with this type.

'Stars & Stripes' - This is another yellow-spotted variety, except with this cultivar, there are lime stripes thrown across the leaf blade. Very rare to find in the U.K. 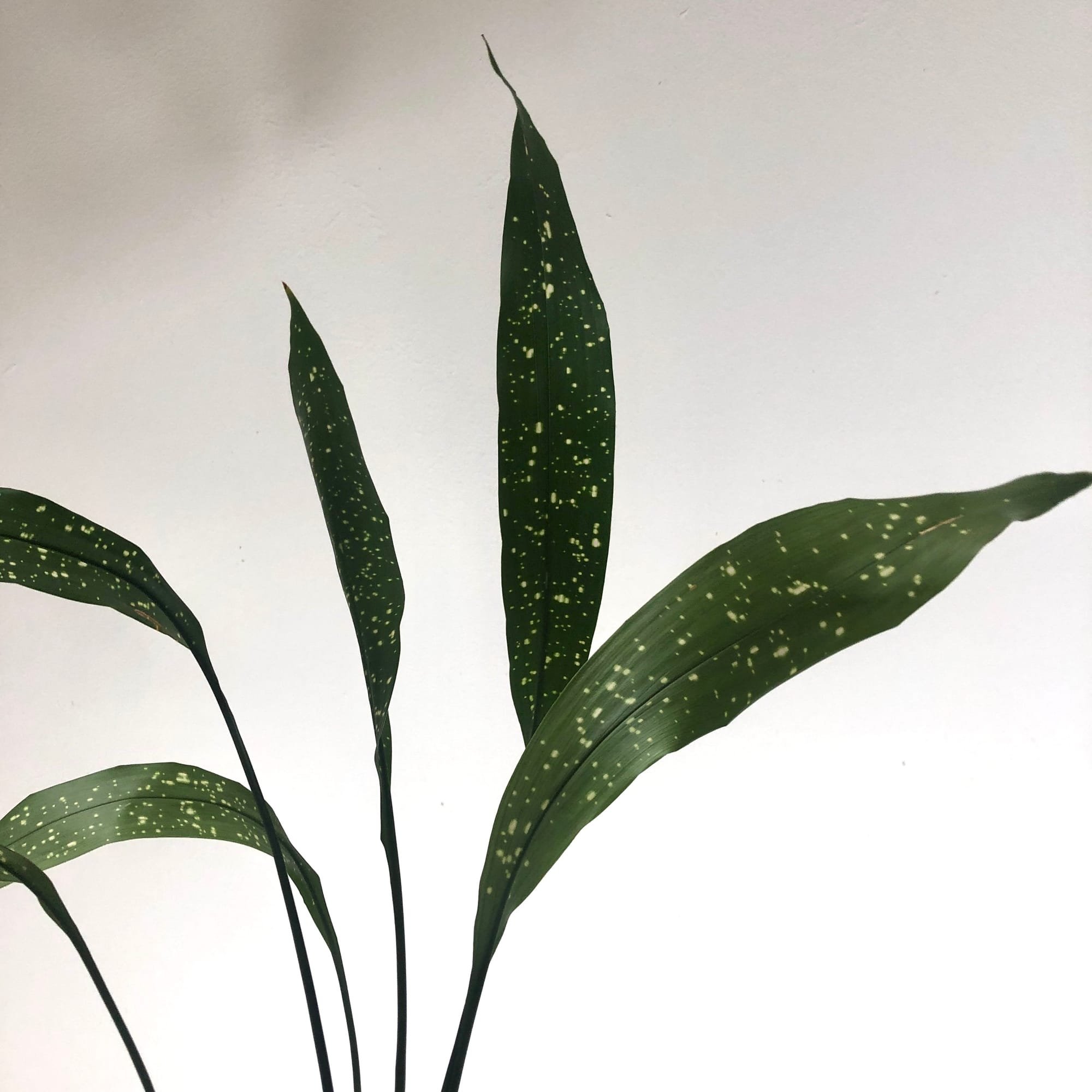 Keep an eye out for mealybugs, spider mites, scale, thrips, fungus gnats, vine weevils & root mealybugs that'll locate themselves in the cubbyholes and undersides of the leaves, with the exception of the latter two in the soil. Common diseases associated with Aspidistra are root rot, leaf-spot disease, botrytis, rust, Fusarium wilt, rhizoctonia, powdery mildew & southern blight - click here to learn more about these issues.

Most likely to be sold on internet stores with rare appearances at Blue Diamond or Dobbies.