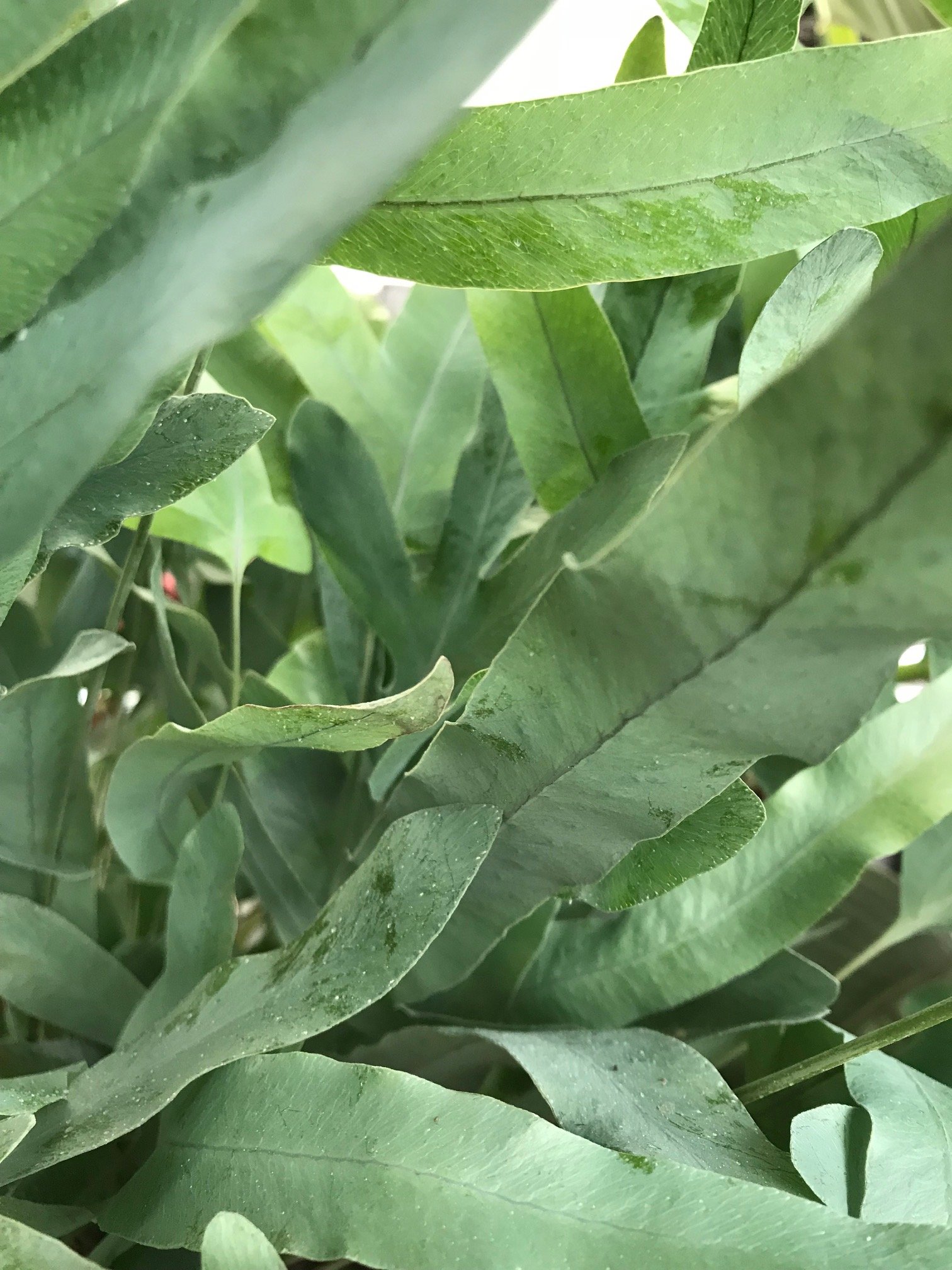 Blue Star Ferns can withstand all ranges of indirect light, meaning that most locations in the home are accepted. Prolonged exposure of the sun's rays will result in severe dehydration and bleaching. For information regarding the rejuvenation of crispy specimens, scroll down to the "Common Issues' section.

Allow the soil's top third to dry out in between irrigations, along with wetting the rhizomes (gold hairy stems) from time to time for the hydration of new growth. Do not, under any circumstances, promote periods of droughts due to the species' reduced ability to endure dehydration. Under-watering symptoms include crispy or greying of leaves, little to no growth and brown patches forming on the fronds. Since the foliage has a bluish-grey tinge, under-watering symptoms are typically masked until it's too late. Over-watering symptoms include yellowed fronds, rotten rhizomes and a general decline in health. These issues are commonly the product of too little heat or light, waterlogging or an overly-large pot used during the repotting process.

Moderate to high humidity should be at the forefront of a Blue Star Fern. Introducing a pebble tray will not only keep the leaf-tips from browning over, but it'll also slow the risk of drying soil and potential dehydration. A gentle monthly hose-down will also benefit the specimen, as it'll hydrate the leaves and reduce dust particles resting on its foliage. 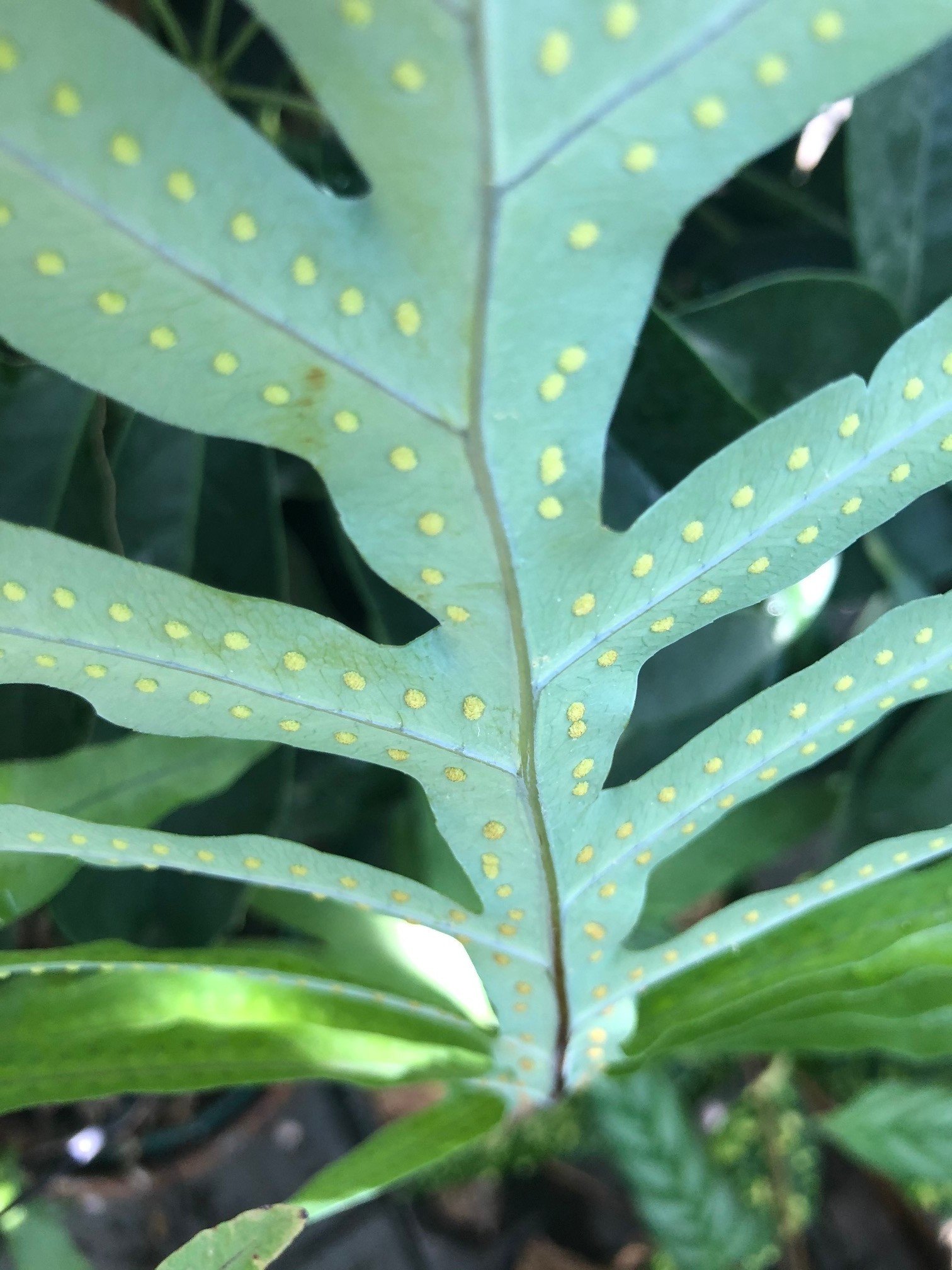 Immature spores that can be propagated once browned over. Scroll down to 'Propagation' for further information on this. 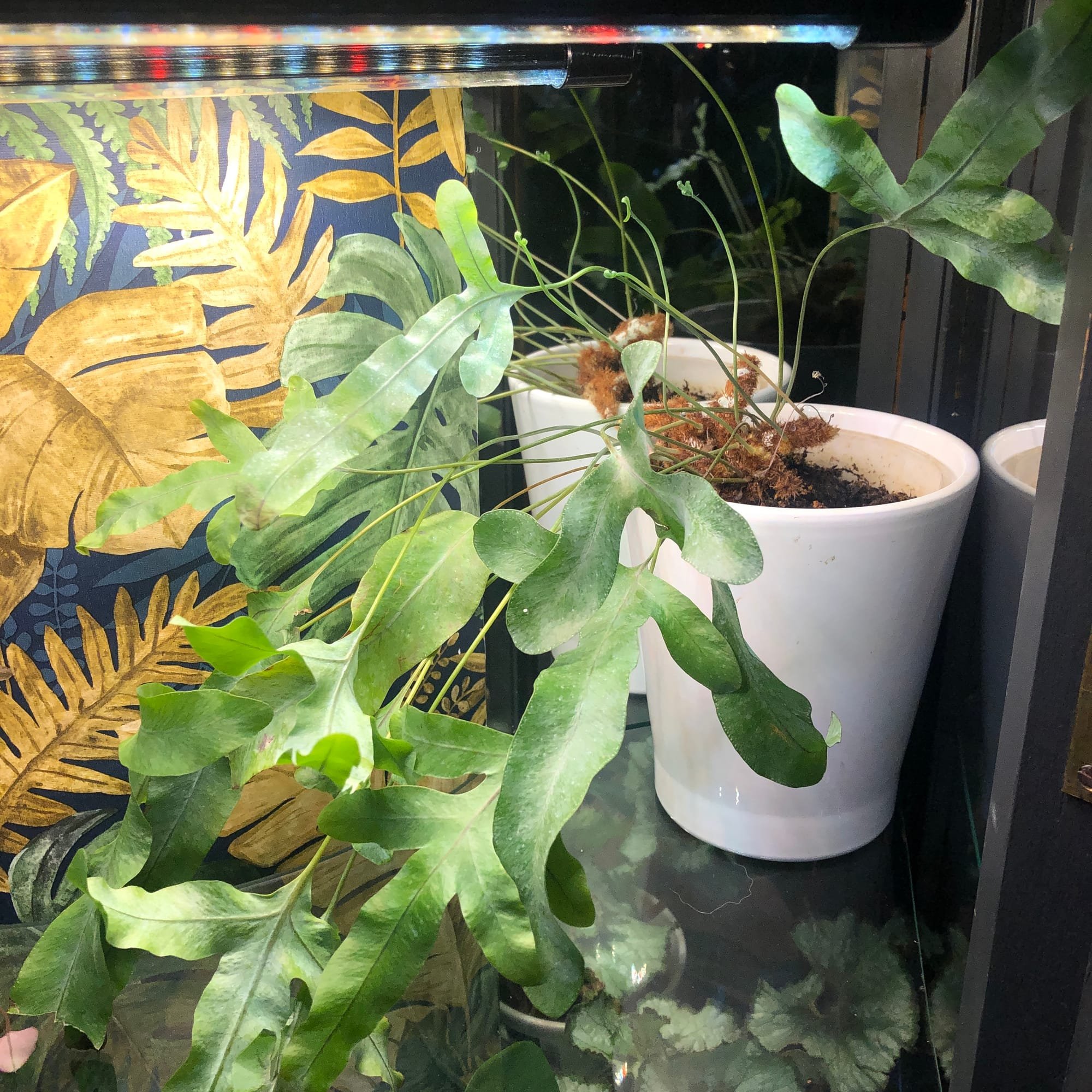 If your Blue Star Fern is showing signs of neglect or demise, why not place it under a grow light? Even within just one week, this specimen here is already beginning to look much better! The browning/yellowing of older foliage is normal behaviour for a maturing specimen. If, however, there is sudden and excessive leaf loss in quick succession, click on the image to book a 1-to-1 Call with our friendly author, Joe Bagley, to help you through this process. 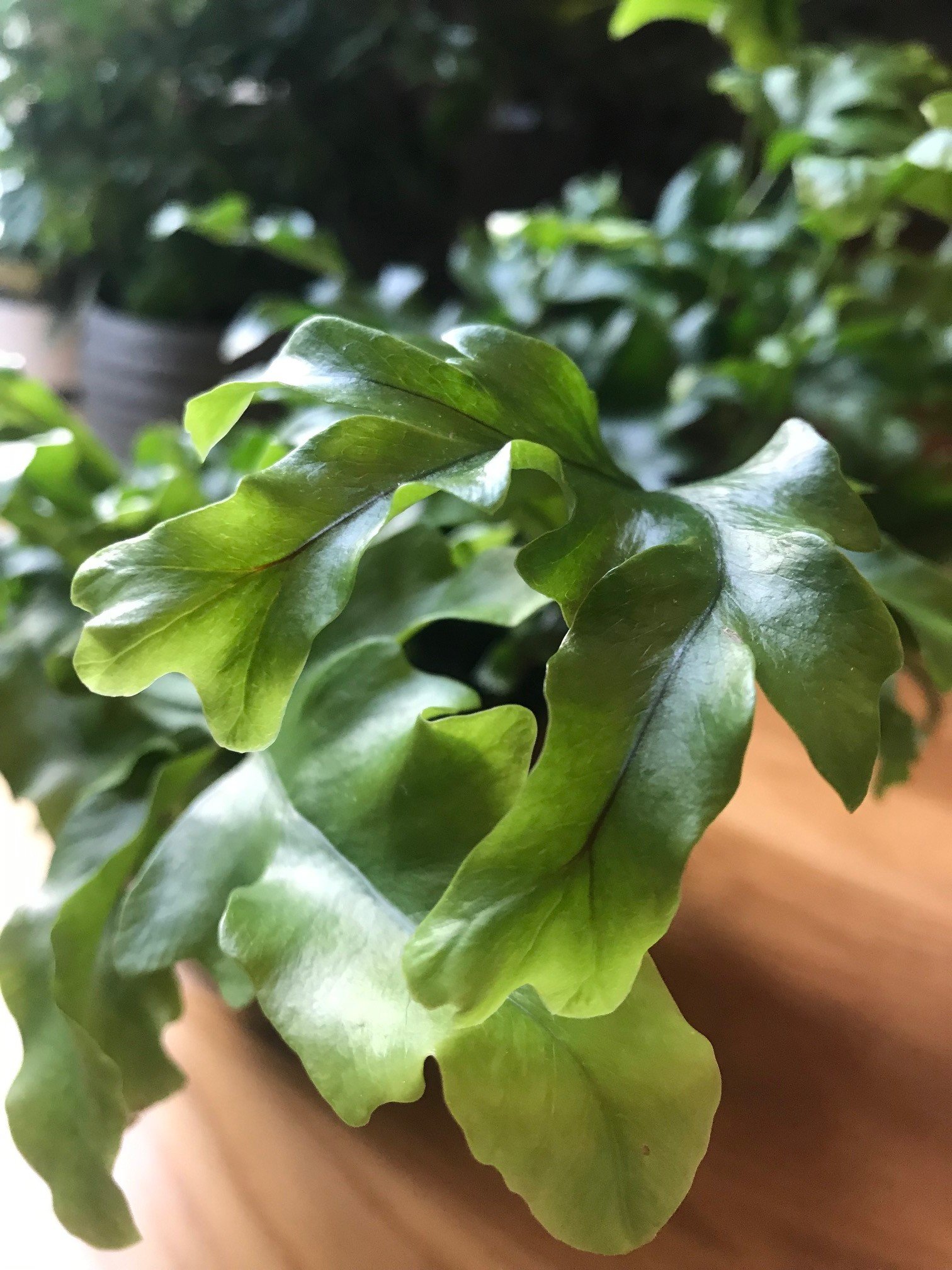 The 'x Phlebosia' is an artificial hybridisation of between the Phlebodium and Pyrrosia created just a few years ago.

Phlebodium is a genus of four species that originate from tropical America. During the mid-1750s, Carl Linnaeus initially classified this genus as part of the Polypodium family; however, several genetic testings found that they were, in fact, a separate genus with comparable attributes. The most common of the four species, the P. auruem, is a hybrid between P. pseudoaureum & P. decumanum. 'Phlebodium' can be translated from Latin to ''lots of veins', with the species' aureum translating to 'gold' in reference to the rhizomes' colour. 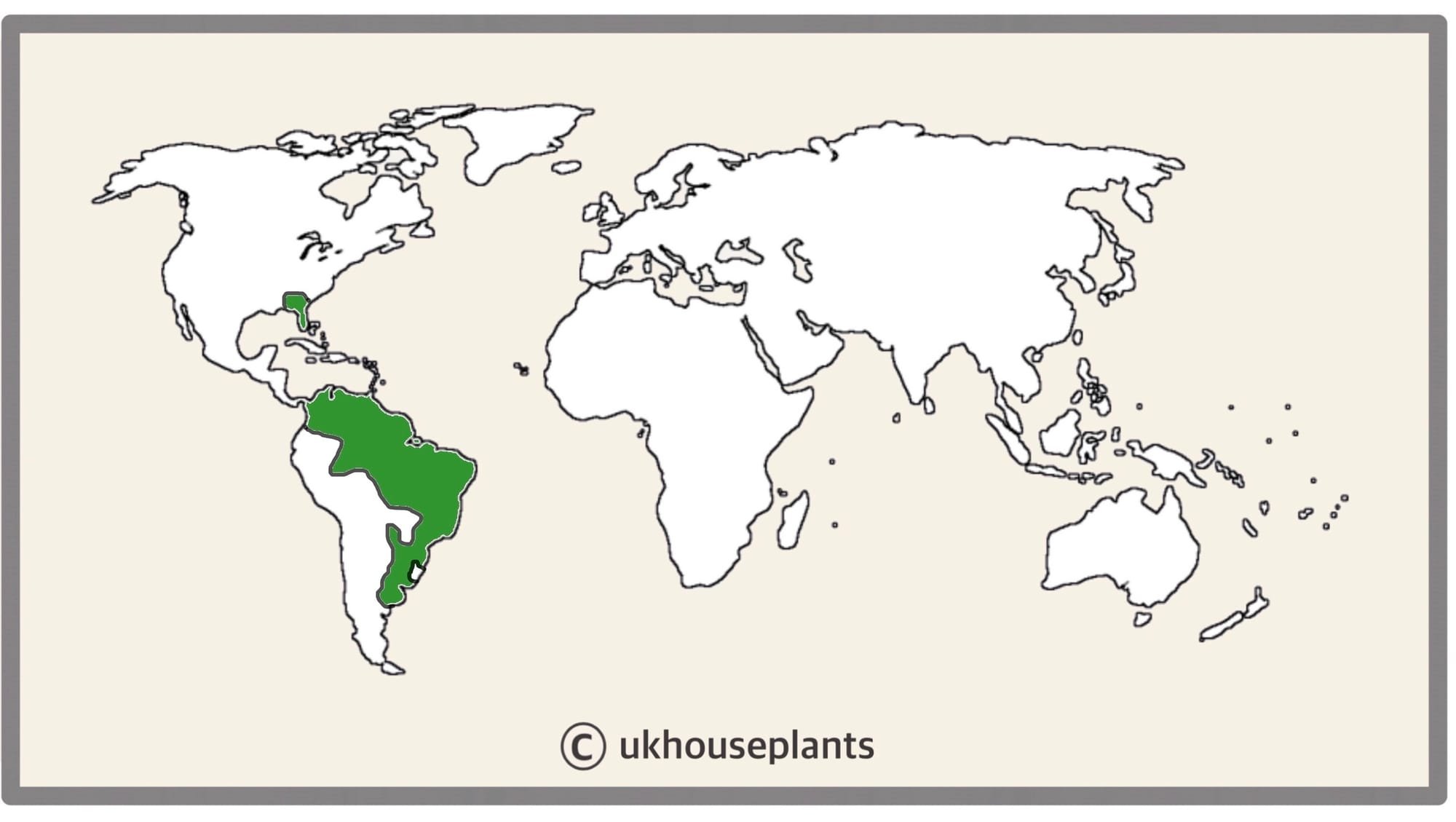 The distribution of Phlebodium aureum.

Up to 1m in height and 1.2m in width. The ultimate height will take between 5 - 8 years to achieve, with several new fronds being developed each season.

Via Spores, Division or Rhizome Cuttings.

Spores (Easy) - You may have noticed little brown spots under the leaves - those are reproductive spores that can be propagated in the same way as seeds, once matured. These zygotes will develop on the under-leaves of each frond; you'll know when they're ready to be propagated, as they'll brown over and begin to crisp.

Division (Easy) - The best time to divide is during the repotting period. Gently tease away some of the soil, separating fleshy rhizomes with sections of the original root systems and plenty of foliage. Place the separated plantlets in a moist, 'Houseplant' labelled potting mix and avoid direct sunlight with prolonged droughts. Although this method is quite easy, be mindful of transplant shock and do not perform this method if the plant is displaying signs of stress. Always moisten the soil 24hrs before repotting or division to avoid shocking the root systems. 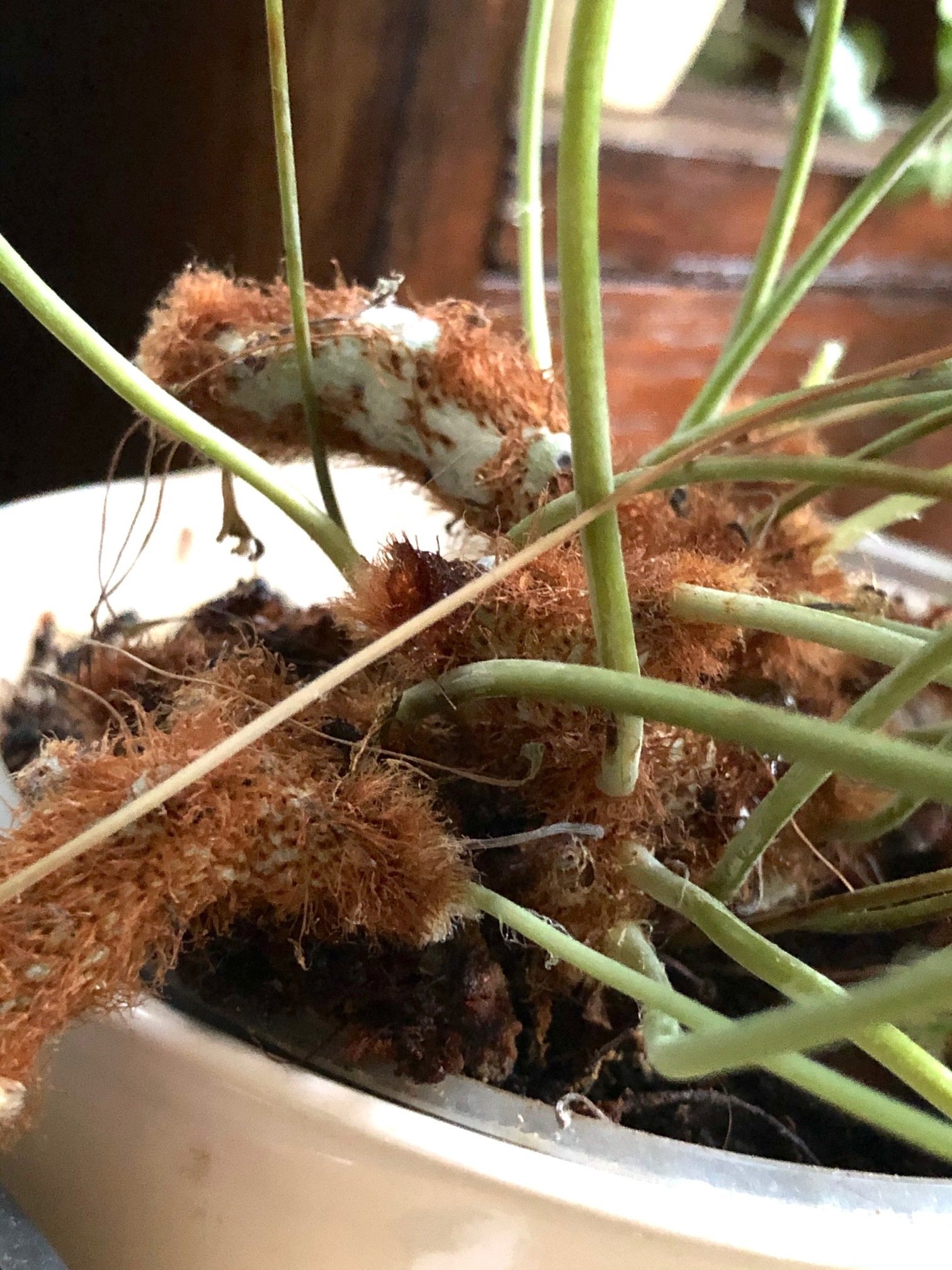 Rhizomes are modified stems that'll house both the roots & leaves of a plant, and is usually the easiest method of propagating a specimen.

Rhizome Cuttings (Easy) - Choose the healthiest, most established rhizomes that show no signs of damage or disease. This method can be taken from spring to early summer, using between two to four fronds within each rhizomatous section. Cut directly below a node using a clean knife, and separate its root systems from the rest of the root ball. Make sure the propagated rhizome is at least 8cm in length so that it has enough stored energy to continue growing. Plant it straight into a moist, 'Houseplant' labelled potting mix to avoid root rot. Sprinkle a half a centimetre of soil onto of the rhizome to lock in surrounding moisture and wait for new growth that may take up to several weeks. Avoid direct sunlight and offer high humidity with temperature (15°C, 59°C) for success. After its second new leaf, treat it like a normal specimen, following the care tips above! 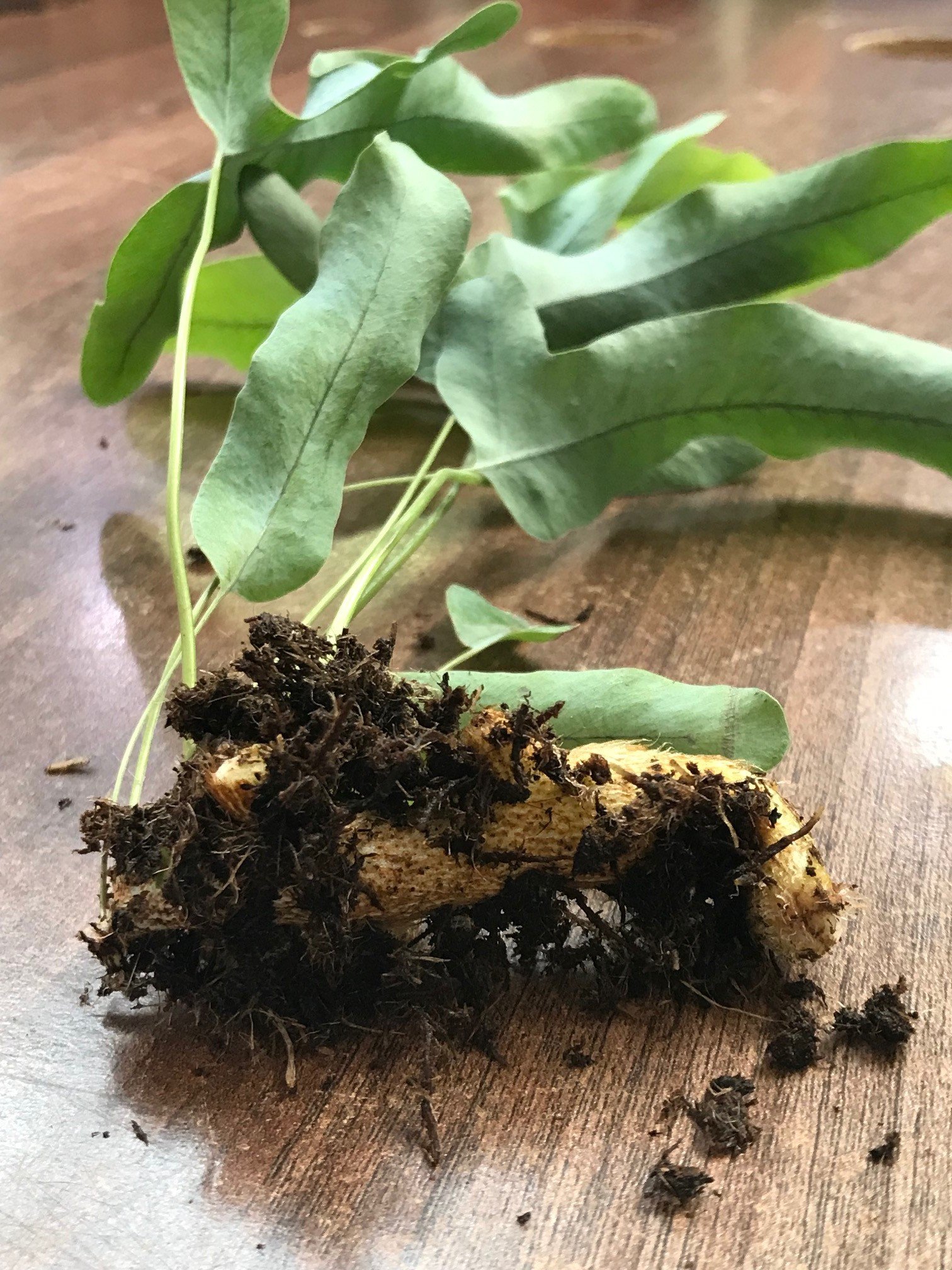 Keep an eye out for mealybugs, aphids, spider mites, scale, thrips, blackfly, vine weevils & root mealybugs that'll locate themselves in the cubbyholes and undersides of the leaves, with the exception of the latter two in the soil. Common diseases associated with Blue Star Ferns are root rot, leaf-spot disease, botrytis, rust, powdery mildew & southern blight - click here to learn more about these issues.