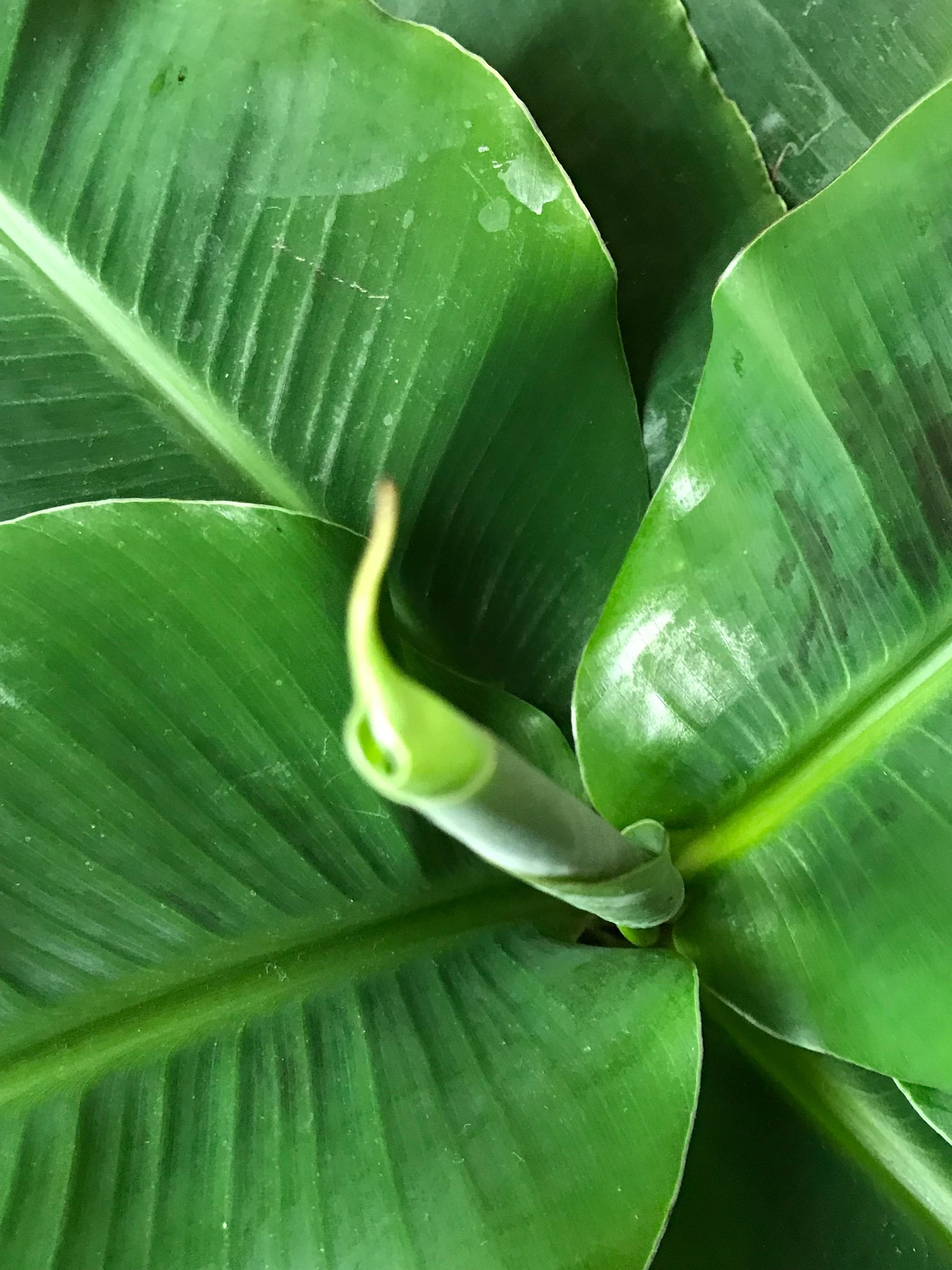 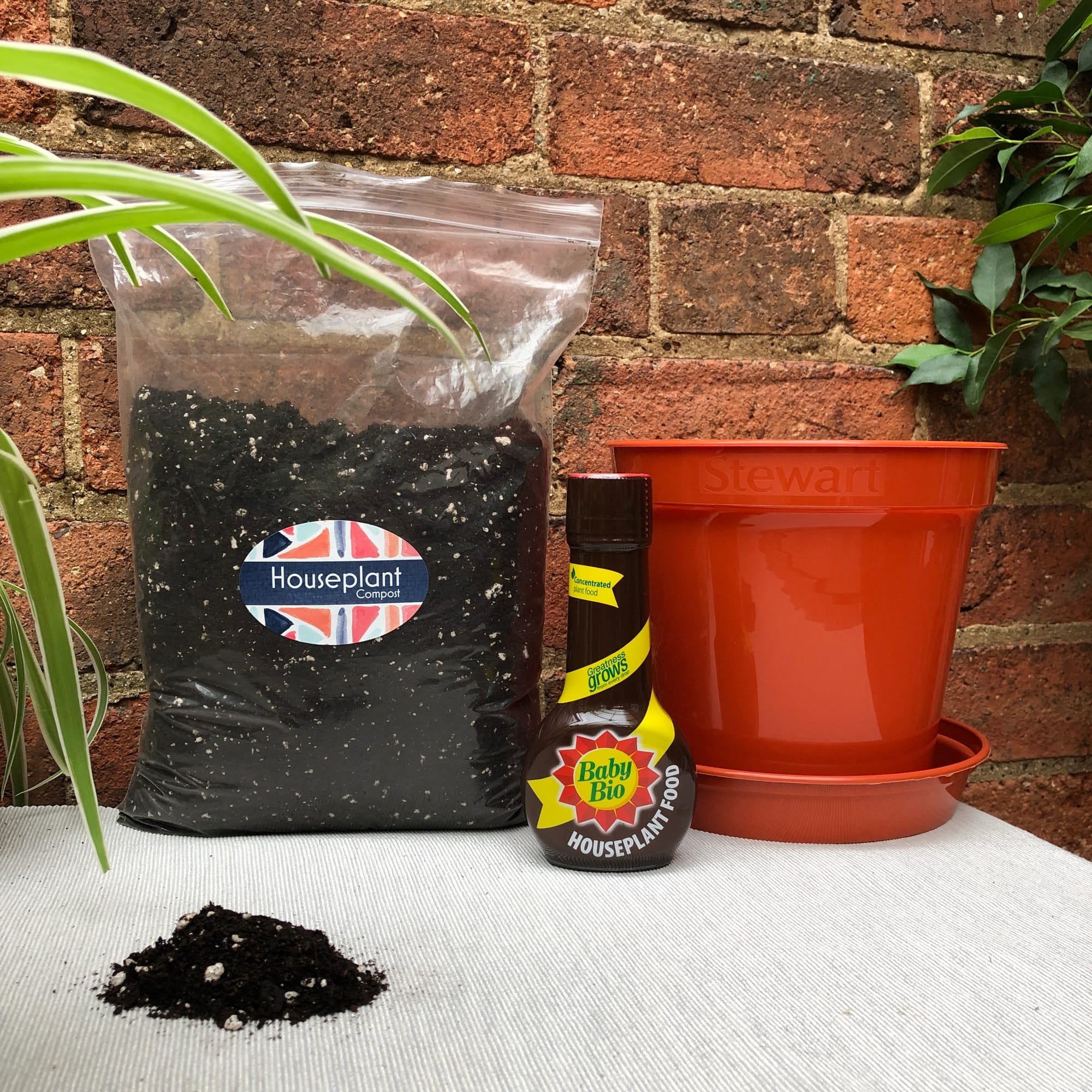 If you're one for saving time, money and stress, our ready-made Repotting Kits are just up your street. Your box will include:

You'll also receive a Step-by-Step Guide on repotting via email. If you'd like to learn more and purchase our best-selling product, be sure to click on this link!

Bright, indirect light is best for Banana Plants, as their tendency of root rot is heightened in darker environments. Be sure to include around two hours of sunlight per day throughout the dormancy period, lasting from early autumn until mid-spring. The sun's warmth will gradually dry out the soil quicker, along with providing vital nutrients to get the specimen through the backbone of its dormancy. Over-head lighting will ensure equal 360º growth and prevent the risk of lopsided growth when situated too far from the source of light (windows, etc.).

Banana Plants and over-watering can be synonymous if given too much water or not enough light. As its main body is largely water-retentive, evolution has served it with the ability to endure short-lived droughts. With this in mind, only rehydrate the soil once the top half has become dry, reducing this further in the autumn and winter. Under-watering symptoms include a greyish appearance, wilting or curling leaves, brown distorted new growth and basal offset death. Over-watering symptoms include yellowing lower leaves, powder on the plant's main body, mouldy or heavy soil, basal offset death and a softened stem. Take the specimen out of its pot and inspect its root health; if you feel that root rot has taken over, be sure to visit this link! 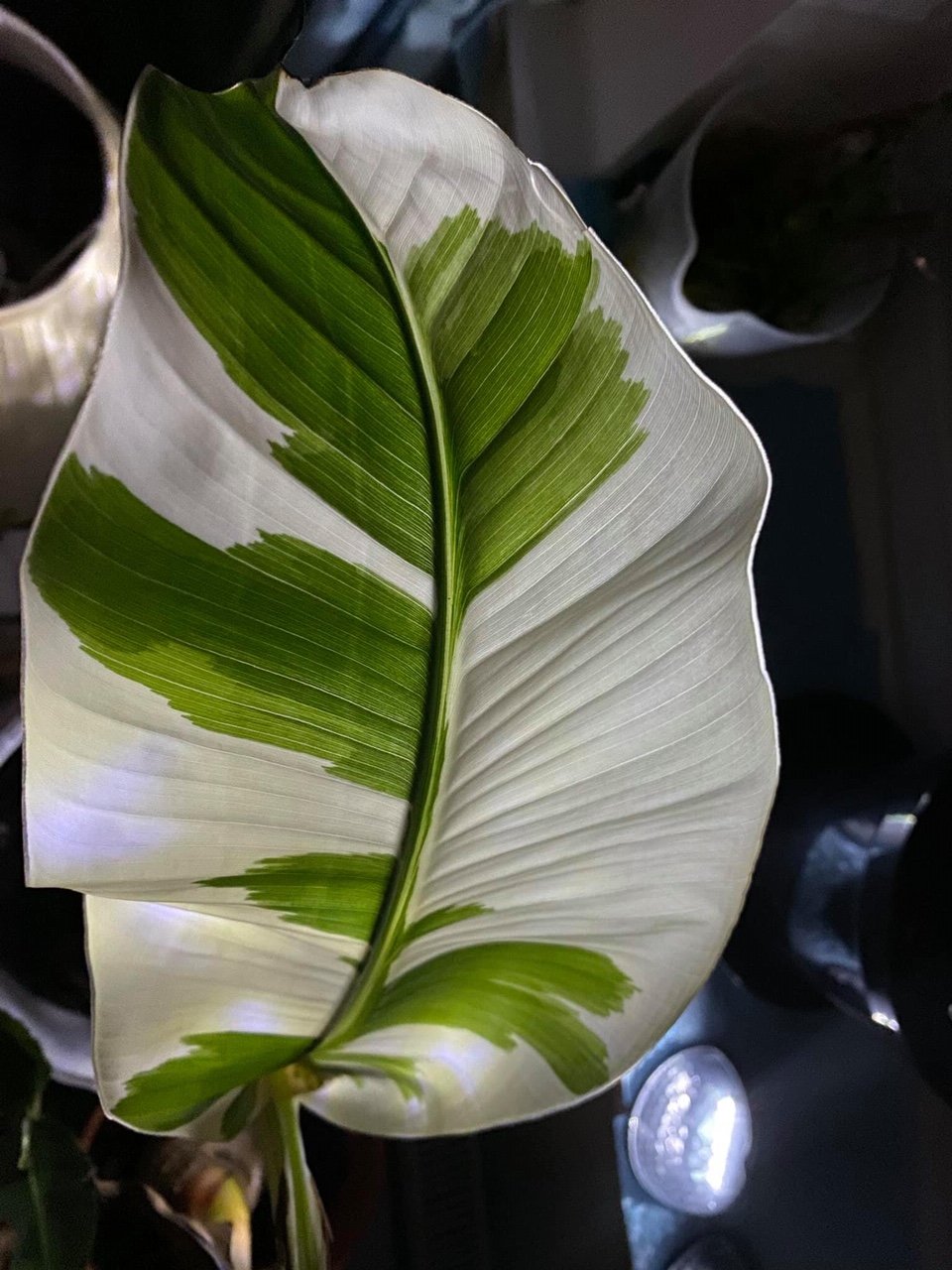 Yellowing lower leaves (closest to soil) are a clear sign of over-watering, usually caused by too little light. Although Banana Plants can do well in darker locations, the frequency of irrigations must be reduced to counteract the chance of root rot. People don't realise that a plant's root system needs access to oxygen too; when soil is watered, the air will travel upwards and out of the potting mix. A lack of accessible oxygen for the roots will cause them to subsequently breakdown over the oncoming days. Click on this link to learn more about root rot and how to address it.

Yellowing sections along its leaves could be the product of many issues, ranging from Spider Mites to chemical burns. Think about its recent cultivation of how frequently you rehydrate its soil, along with a quick scan over the foliage's undersides. The use of 'Leaf Shine' or other chemical-based products may also have a detrimental effect on its health, as Banana Plants are particularly sensitive to inorganic substances. When removing the affected leaf or leaves, be sure to avoid puncturing the yellowed/browned tissue as it may lead to further decline. Prune the entire leaf off via the petiole and investigate the rest of the plant for a potential spread of the problem.

Mould developing on the soil means two things - too little light and over-watering. Despite the harmlessness, it'll prove unsightly to most gardeners and is therefore removed once known. To remove, replace the top two inches of the soil for a fresh batch of 'Cactus & Succulent' labelled compost. Either increase the amount of light received (no direct sunlight for the first few weeks to prevent environmental shock) or decrease the frequency of waters slightly. If the mould is accompanied by yellowing lower leaves, you may also have a case of root rot.

Due to its sensitivity to chemicals, Leaf Shine shouldn't be used to improve the appearance of the foliage, and instead should be cleaned via a rinse of lukewarm water. Failure to do so may cause yellowed, mottled spots that cannot be undone.

Curled leaves and brown leaf-edges are the result of too little water and over-exposure to the sun. Banana Plants are best located in bright, indirect settings, and those that haven't acclimatised to the harsh rays will show signs of sun-scorch and environmental shock. A splash of winter sunlight is acceptable as long as the soil moisture is regularly observed, with complete avoidance once summer comes along.

A loss of variegations is caused by too little light. Move the plant into a brighter area with minimal direct sunlight to allow the variegations to appear on the new growth. If you aren't entirely displeased about the loss, simply skip this step. Alternatively, extreme variegations that hinder the plant from developing chlorophyll (green pigmentation) is typically caused by too much sunlight. 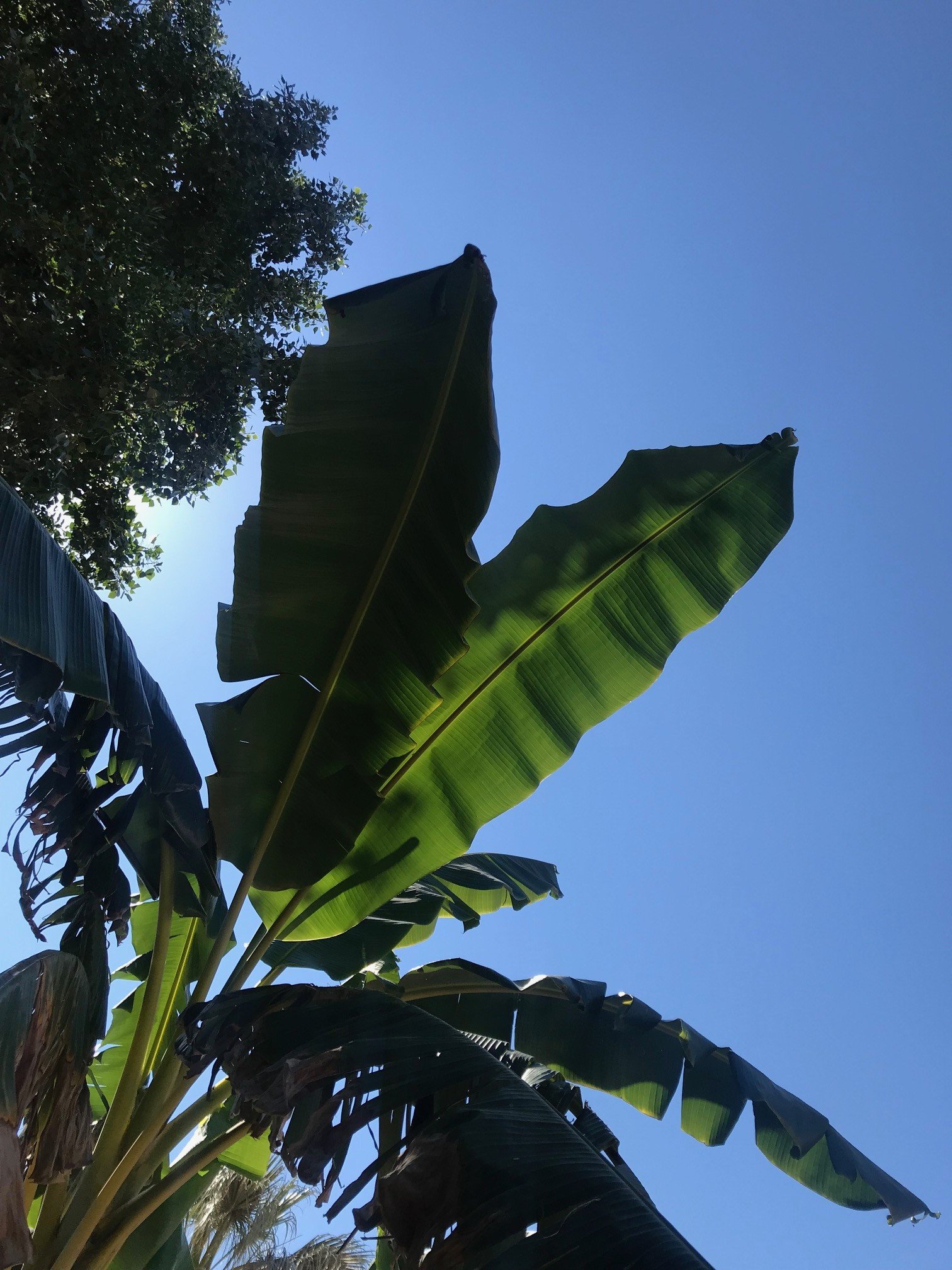 The genus, Musa, was first described in 1753 by Carl Linnaeus, Latinising the Arabic word for Bananas (موز), which was mentioned in the eleventh-century Arabic encyclopaedia. The direct taxonomy of the Banana family is diverse and contradictory, mainly because of new seedless cultivars and naturally-occurring hybridisations that took place over the previous one hundred years.

Cavendish bananas have a unique link to Alton Towers and Chatsworth House that date way back to the 1830s. For those who aren't from the UK, Alton Towers used to be a former country estate, which is now a significant theme park, achieving over two million visitors each year. The Chaplain of Alton Towers brought over several crates of bananas from the Mauritius islands for William Cavendish, the Duke of Devonshire during that time. His friend and head-gardener, Sir Joseph Paxton, cultivated them the seeds in the estate of Chatsworth House and thus classifying them as Musa cavendishii in honour of his good friend.

Banana Plants are one of the earliest examples of domestic cultivation, that can be dated back to over one thousand years. 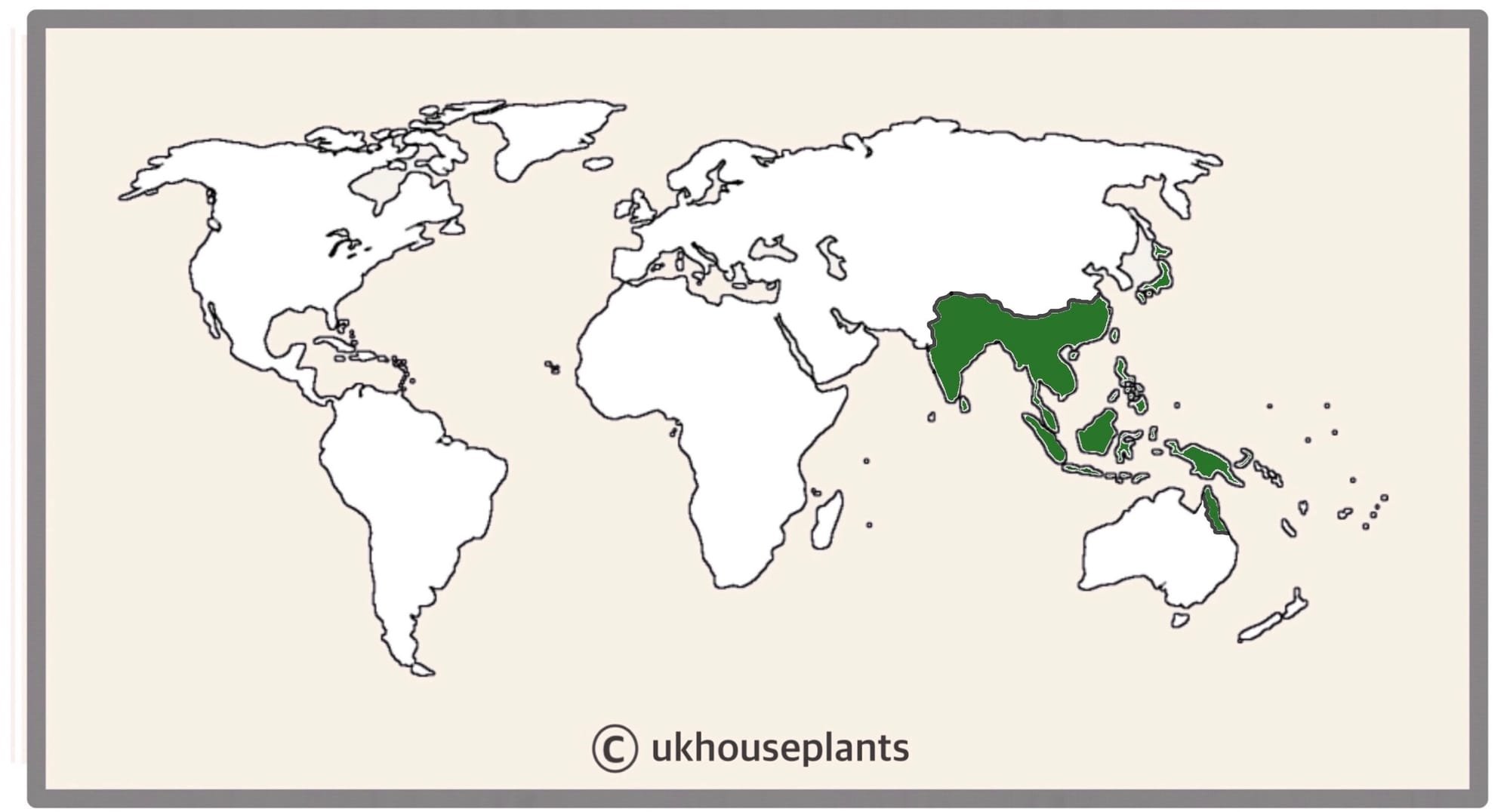 The Distribution of Musa Bananas.

10° - 38°C   (50 - 100°F)
H1b  (Hardiness Zone 12)  - can be grown outdoors during the summer in a sheltered location with temperatures above 12℃  (54℉),  but is fine to remain indoors, too. If you decide to bring this plant outdoors, prevent it enduring excessive direct sunlight or high winds due to the heightened risk of leaf-scorch and dehydration. Regularly keep an eye out for pests (Mealybugs & Aphids) when re-introducing it back indoors.

Dwalf Varieties can surpass 1.2m in height and 1.0m in width, with larger specimens (like M. ensete, M. basjoo & M. × paradisiaca) reaching over 2 - 3m after several years. The ultimate height will take around 6 years to achieve, with many specimens surpassing 15 years in the correct cultivation. 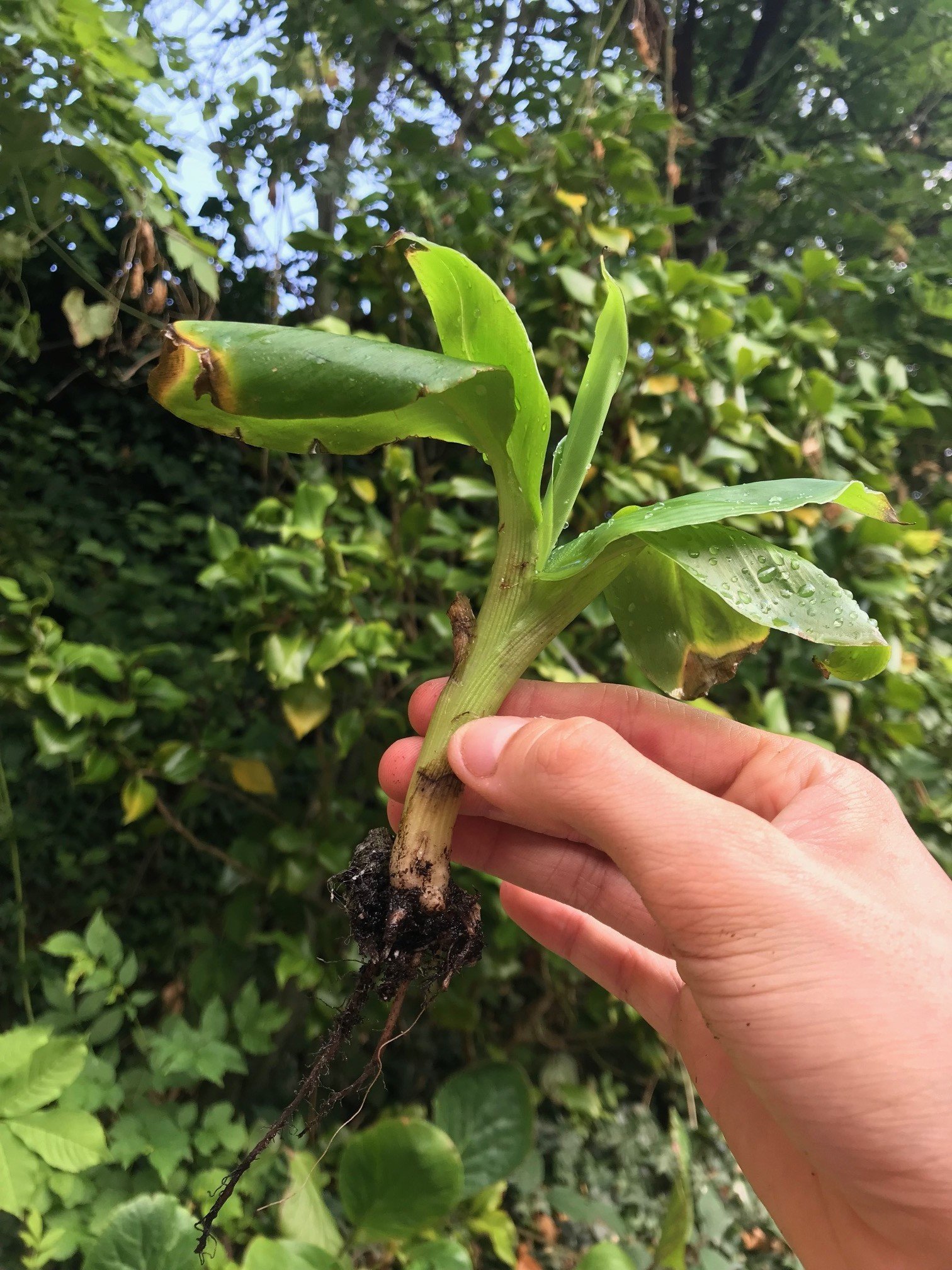 The perfect example of a 'Pup' consists of healthy, damage-free leaves, a hardened base and a sufficient root system.

Basal Offset Division (Easy) - Your plant will produce several basal offsets that can be separated once they have a sufficient root system, and surpass 10cm in height. If possible, water the soil 24hrs before the main event to reduce the risk of transplant shock, when its dry root systems are over-fingered. Take the plant out of its pot and place your fingers close to the nodal junction - compost may have to be removed for better access. Push the chosen offset downwards until you hear a snap. Separate the foliage and its root system away from the mother plant, mentally noting the high risk of damage. Transplant in the appropriate sized pot with a fresh batch of 'Cactus & Succulent' labelled compost. Maintain evenly moist soil and situate it in a bright, indirect location away from any direct sunlight. After three weeks, treat it like a healthy specimen, following the care tips above!

A stalk will form deep beneath the stem's base before emerging from its top after several weeks of development. Its flowers are arranged in a zigzag format, similar to the Bird of Paradise inflorescence that will hold up to pollination sites. Each Banana stem plant will only bloom once and will redevelop stalks on matured offsets via its rhizomes. It's highly unlikely that a domestically grown banana plant will produce flowers or fruits due to the insufficient growing conditions of dry air and consistent annual temperatures.

Repot every two or three years in the spring, using a 'Cactus & Succulent' labelled compost and the next sized pot with adequate drainage. Hydrate the plant 24hrs before tinkering with the roots to prevent the risk of transplant shock. For those that are situated in a darker location, add a thin layer of small grit in the pot's base to improve drainage and downplay over-watering. Click here for a detailed step-by-step guide on transplantation, or via this link to learn about repotting with root rot.

Keep an eye out for mealybugs, aphids, spider mites, scale, thrips, blackfly, vine weevils & root mealybugs that'll locate themselves in the cubbyholes and undersides of the leaves, with the exception of the latter two in the soil. Common diseases associated with Banana Plants are root rot, leaf-spot disease, botrytis, rust, Fusarium wilt, powdery mildew & southern blight - click here to learn more about these issues.

Many Garden Centres or Online Stores.