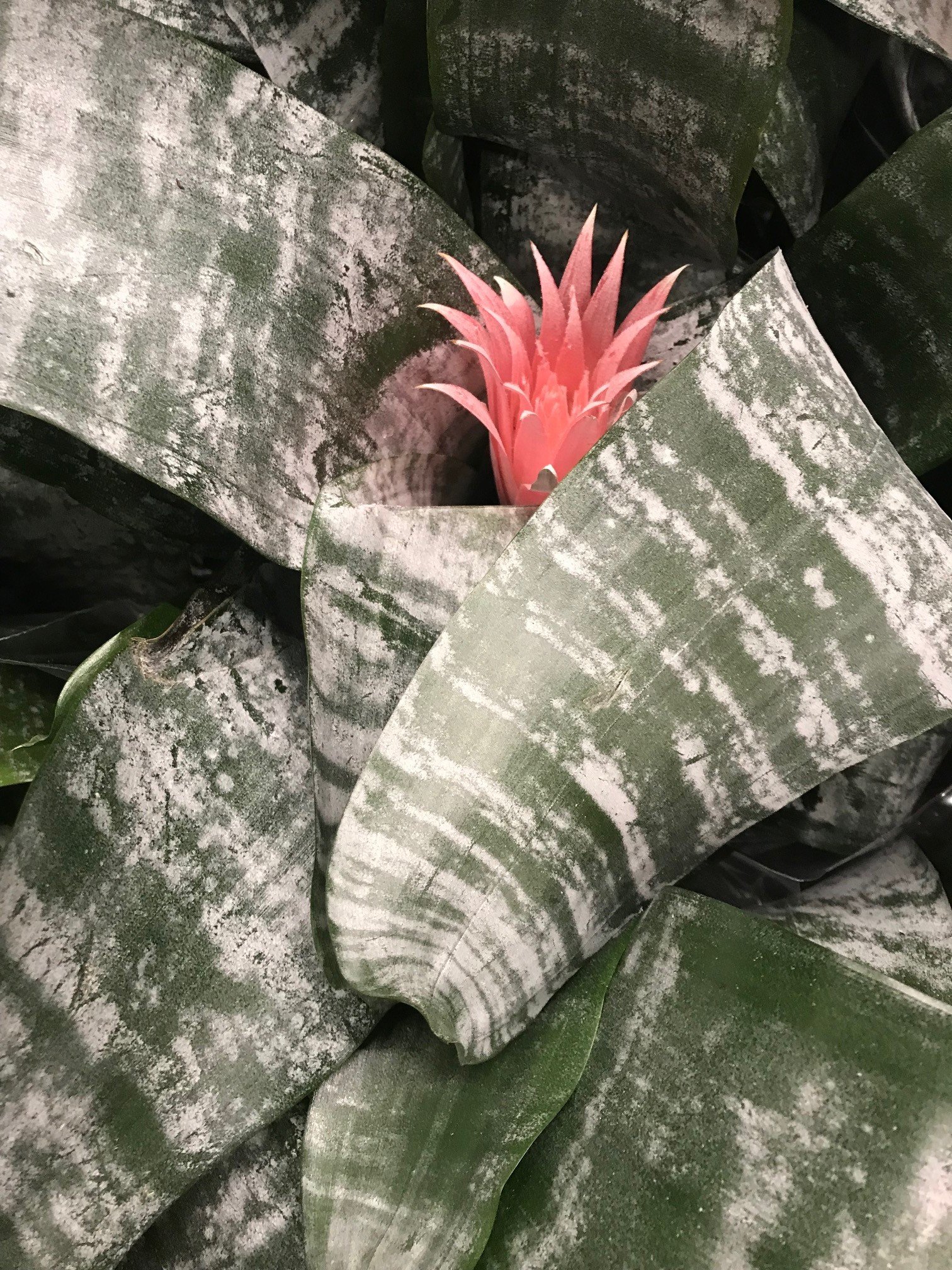 Provide a bright, indirect setting with minimal sunlight; pale brown patches will appear over its foliage if left in too strong light for extended periods. Alternatively, an environment that is too dark will increase the chance of a rotten crown, as well as yellowing leaves and stunted growth. Keep this plant around four meters from an operating heat source to avoid browning-leaf tips.

While actively growing, allow half of the soil to dry out between waters, reducing this further in the autumn and winter. Be sure to keep the 'crown' topped up with water if in a bright environment, as this will hydrate the plant and maintain high humidity. Under-watering symptoms include pale leaves, brown leaf patches, sunken foliage and crisping flowers; these issues are typically caused by intense sun or heat, being potbound, or pure forgetfulness. Over-watering symptoms include a rotten stem with yellowing leaves, flower collapse and 'pup' death. If this occurs AFTER the flowers have elapsed, this is a natural response after unsuccessful reproduction. For those that haven't bloomed, possible reasons for the decline are too little light or heat, excess moisture within its foliage and a lack of drainage. If the Aechmea is situated in a dark location, keep the central crown dry and revert to irrigation via the soil as over-saturation will cause 'crown rot' and southern blight.

High humidity is a must. Either keep the central well topped with water or introduce a pebble tray to maintain constant humidity. A pool of standing water beneath will provide enough moisture for the specimen without the risk of rotting foliage.

Fertilise every two weeks in the growing period with either a 'houseplant' labelled feed or a 'bromeliad' fertiliser, reducing this to monthly in the autumn and winter.

Yellowing older leaves (closest to soil) and crown rot are a clear sign of over-watering, usually caused by too little light. Although Aechmea can do well in darker locations, the frequency of irrigations must be reduced to counteract the chance of root rot. People don't realise that a plant's root system needs access to oxygen too; when soil is watered, the air will travel upwards and out of the potting mix. A lack of accessible oxygen for the roots will cause them to subsequently breakdown over the oncoming days. Click on this link to learn more about root rot and how to address it.

Curled leaves and brown leaf-edges are the result of too little water and over-exposure to the sun. Aechmea are best located in bright, indirect settings, and those that haven't acclimatised to the harsh rays will show signs of sun-scorch and environmental shock. A splash of winter sunlight is acceptable as long as the soil moisture is regularly observed, with complete avoidance once summer comes along.

Clean the leaves regularly. Although this isn't too much of an issue, a build-up of dust particles can clog up the plant's pores, causing lowered light capturing-efficiency. Rinse the topsides of the leaves down once a month to keep levels down and improve growing conditions.

Mould developing on the soil means two things - too little light and over-watering. Despite the harmlessness, it'll prove unsightly to most gardeners and is therefore removed once known. To remove, replace the top two inches of the soil for a fresh batch of houseplant compost. Either increase the amount of light received (no direct sunlight for the first few weeks to prevent environmental shock) or decrease the frequency of waters slightly. If the mould is accompanied by yellowing lower leaves, you may also have a case of root rot.

Originally from South America, species of Aechmea were brought over in the 1820s to Europe for the rich and privileged. The genus was first classified by Hipólito Ruiz López & José Antonio Pavón in 1798, using the Greek word 'aichmê' that refers to the spikes found on its leaves. The most popular species' name, A. fasciata, was first penned by John Lindley in 1827, using the Latin for for 'bands' that refers to its striped foliage.

If you wonder why Aechmea has silver leaves, it's to do with the evolution of light-reflecting scales that combats potential water-loss during sunny or windy spells. Not only can they absorb harmful chemicals during the day, but they can even do it at night, making them an ideal candidate for urban residential areas. 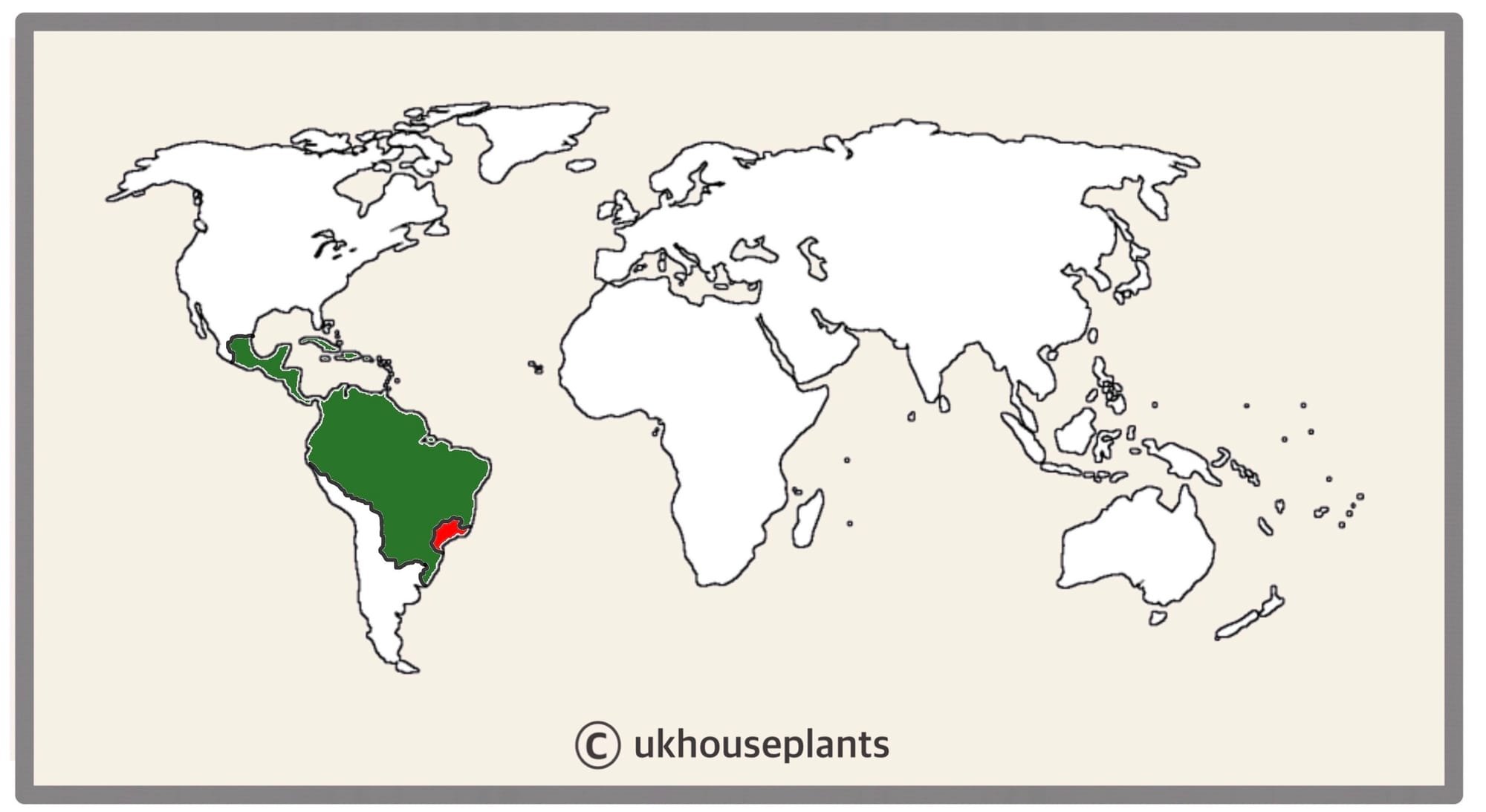 The Distribution of Aechmea in Green  &  A. fasciata in Red.

16° - 30°C   (60 - 86°F)
H1a (Hardiness Zone 13) - This plant should ideally be grown indoors or under glass all year round. Never allow temperatures to dip below 12℃ or permanent damage may occur in the likes of flower loss, stunted growth and yellowed leaves.

Up to 50cm in height and 40cm in width, with an average age of two years. Once the specimen has finished flowering, it may die shortly after so performing basal offset (pup) division is vital to keep the plant's existence going.

Basal Offset Division (Easy) - Your plant will produce several basal offsets that can be separated once they have a sufficient root system and surpass the mother plant's height by half. If possible, water the soil 24hrs before the main event to reduce the risk of transplant shock, when its dry root systems are over-touched. Take the plant out of its pot and place your fingers close to the nodal junction - compost may have to be removed for better access. Push the chosen offset downwards until you hear a snap. Separate the foliage and its root system away from the mother plant, mentally noting the high risk of damage. Transplant in the appropriate sized pot with a fresh batch of houseplant-labelled compost. Maintain evenly moist soil and situate it in a bright, indirect location away from any direct sunlight. After four weeks, treat it like a healthy specimen, following the care tips above! 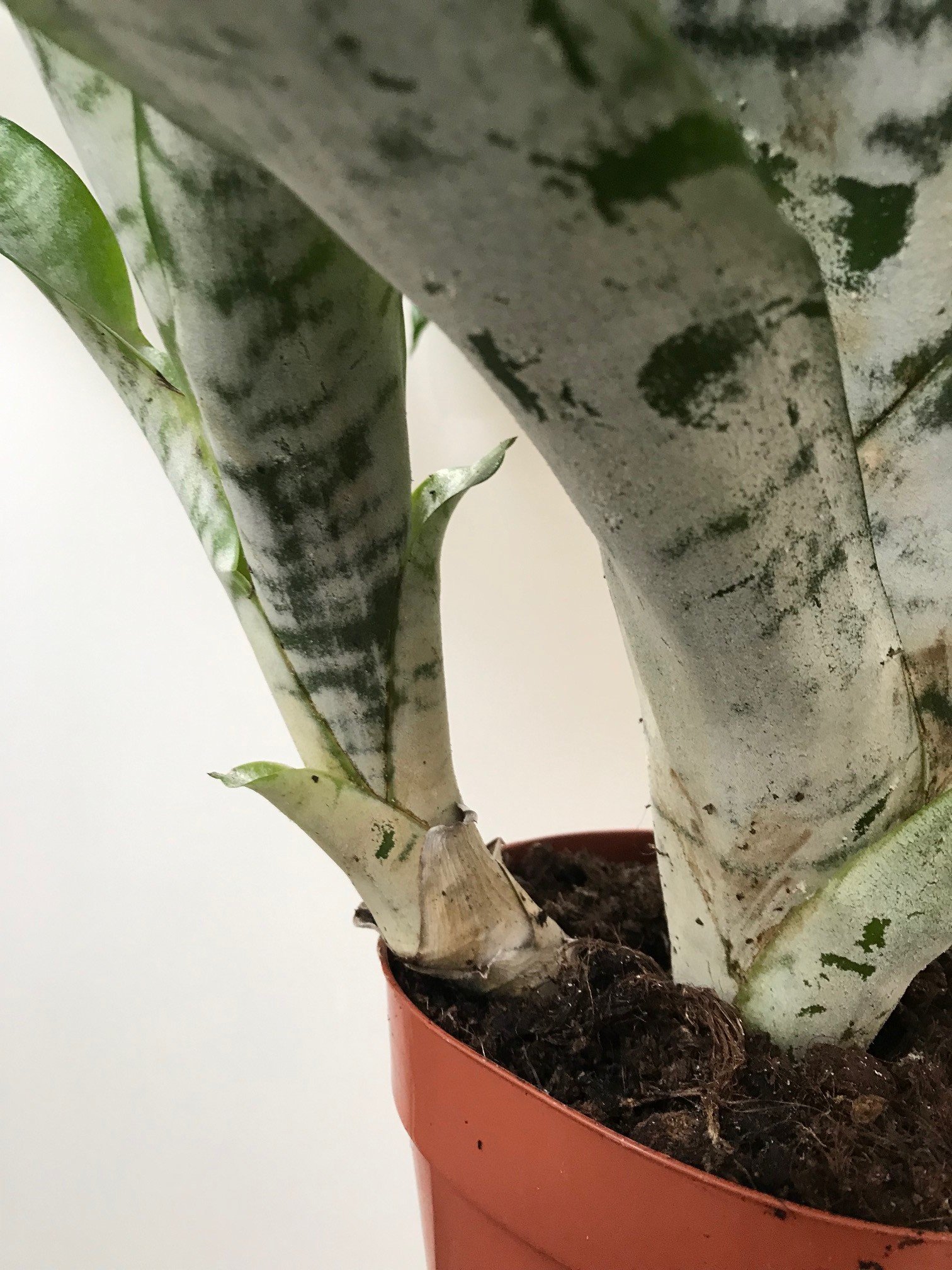 This is a prime example of an matured 'pup' that can be propagated during the growing period.

The individual Aechmea will only flower once, but as mentioned above, pups will form at the base of the plant that'll eventually flower. The bract can be up to 40cm in length, and can last up to three months in the spring or summer. Colours include: red, yellow, green, brown, purple or pink, that are arranged in a coning-rosette shape.

Although it isn't entirely necessary, you can transplant it every few years in the spring using a houseplant-labelled compost with the next sized pot. Hydrate the plant 24hrs before the tinkering with the roots to prevent the risk of transplant shock. For those that are situated in a darker location, add an extra splash of perlite in the pot's base to improve drainage and downplay over-watering. Click here for a detailed step-by-step guide on transplantation, or via this link to learn about repotting with root rot.

Keep an eye out for mealybugs, spider mites, scale, thrips & root mealybugs that'll locate themselves in the cubbyholes and undersides of the leaves, with the exception of the latter in soil. Common diseases associated with Aechmea are root rot, leaf-spot disease, botrytis, rust, powdery mildew & southern blight - click here to learn more about these issues.