Mould On Your Soil?

Small colonies of fungi will develop on the organic matter within the top layer of the soil. This includes bark segments, sphagnum peat, or even the fine soil grains itself. Although there are several different species of fungi, they'll all need to be treated in the same way. White or yellow mould will most likely be a form of saprophytic fungus, which is completely harmless and even beneficial for most plant species. It's up to you whether or not to remove the fungus, but for the interest of visuals, this article will discuss the easiest ways to eradicate it from the soil.

N. B. - If you've found black, sticky mould growing on the top sides of the leaves, it most likely is Sooty Mould which is caused by pest excrement. Click here for more information regarding this issue! 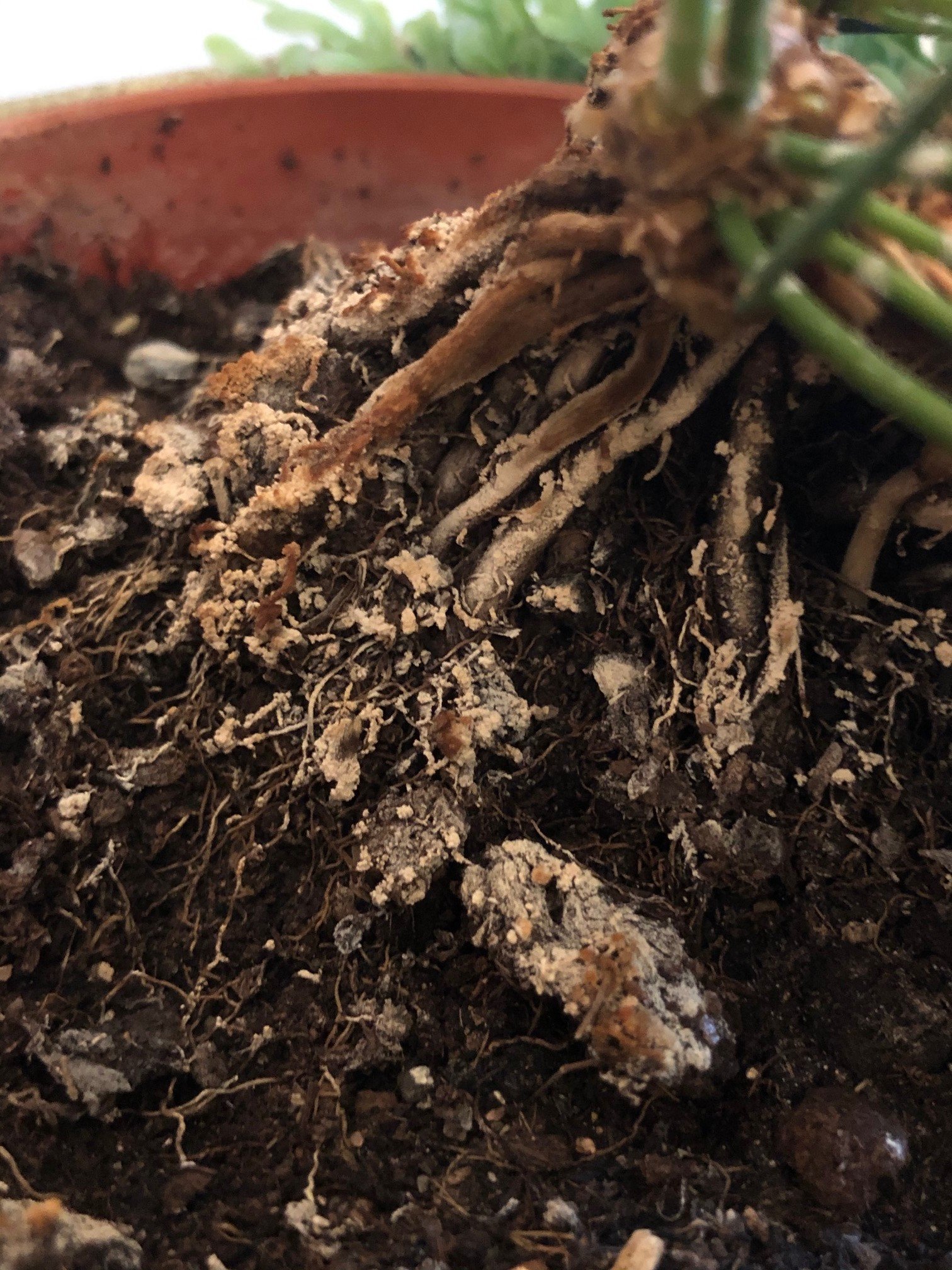 Although it looks harmful, this fungi has been growing on the Asparagus Fern for over three years, without any damage to the plant!

An infected batch of compost is the common culprit for an attack. Whether it was originally from the nursery or garden centre, or a recent transplant, this form of fungi can lay dormant in the soil for many months until the conditions are best suited for germination. When storing a bag of compost at home, be sure to keep it in a dry, dark shed or garage with the hole tightly sealed.

Over-watering and high humidity will speed up the process of development, as the fungus thrives in saturated conditions.

A dark location that offers poor air circulation is another common culprit for an attack. Bathrooms and laundry rooms are the two hard-hit areas of the house as they'll provide a humid, shady location with little chance of fresh air.

Our compost is a brilliant replacement for your current soil's top layer. which is where the mould is currently infesting. Why not replace it this week with top-quality soil to finally eradicate the fungi?!

Along with the peat-free compost, you'll receive a Step-By-Step Guide on repotting, a 40% off voucher for a 1-to-1 Plant-Advice Call with Joe Bagley, and FREE Delivery to anywhere in the UK. (From £4.19)

If you'd like to learn more and purchase our best-selling product, be sure to click on this link! 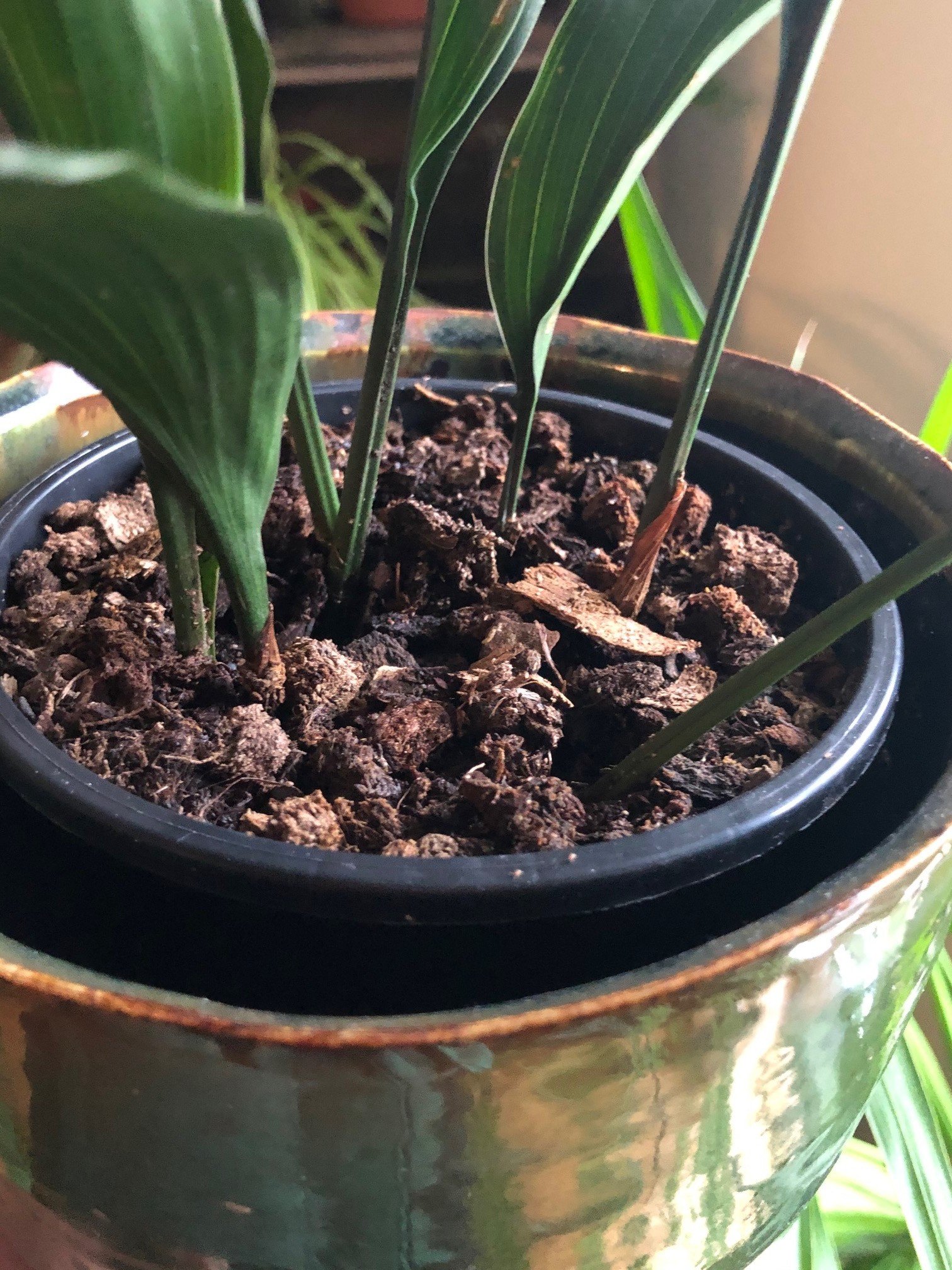 Potting mixes that have a high concentration of organic matter (like bark or coir) are more likely to develop mould. Plant - Aspidistra elatior

4. How to Prevent a Reoccurrence

First things first, reduce the frequency of waters if it's in a dark location. In some cases, but not all, mould or fungi can still develop on dry soil, but usually is caused by poor soil or low light. The relationship between the frequency of irrigations and the light levels is significant. If you've got a plant in a shady setting with high humidity, you must allow the top few inches to dry out in between waters. This is because the combination of no natural lighting and overly saturated soil will significantly increase spore germination.

Poorly stored bags of used compost should never be used for houseplants. When there's an open hole in the sack, moisture can be absorbed into the soil which will be a breeding ground for nasties to develop. If you've got leftover soil, be sure to keep it in a dry, dark environment with the hole sealed fully.

Regularly check for any signs of fungus development in the plant's soil - even if it's just a small portion that becomes moulded, be sure to remove the whole layer for a fresh batch. You can never be too safe with an infestation of pests or diseases, especially if you have them in close proximity to one another!