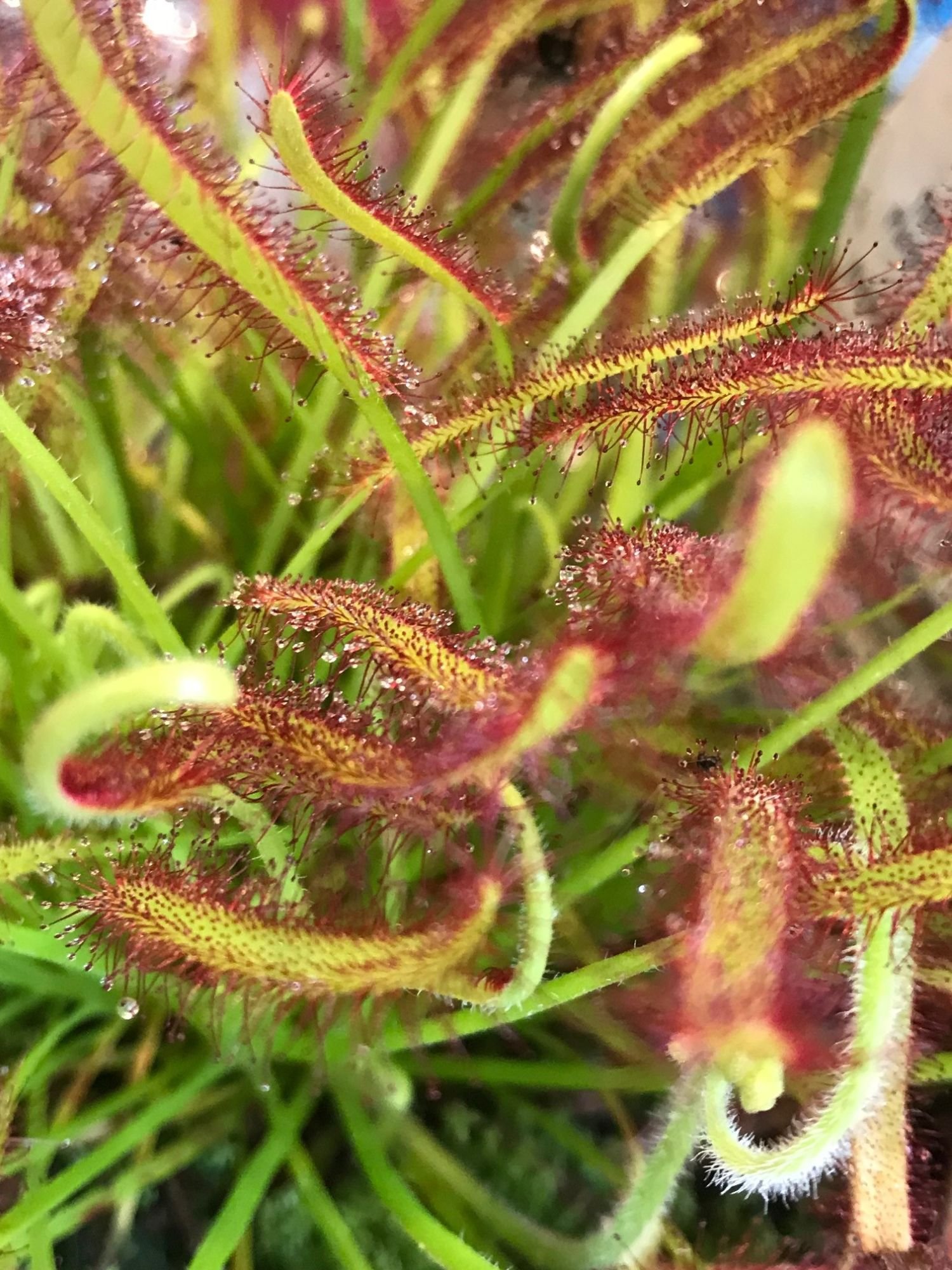 Learning about the functionality of how a Sundew attracts its victims is a great place to start. Many people will have a vague idea of how the plant's mechanics works; however, the science behind this is much more enjoyable. The insect is lured onto the sticky 'platforms' via its scent of sweet nectar and bright colours. Once trapped in the mucilage, the digestive-acid located in the leaves' pads will begin its work in breaking down the victim's soft tissues, leaving nothing by its outer exoskeleton. The more the insect tries to escape, the more likely it is to become further trapped in the pads, thus providing a tasty meal for the plant.

It's mandatory to provide a location that offers at least a few hours of morning or evening sunlight. Windowsills, semi-shaded conservatories or a bright porch is an ideal setting for the species. Areas that are too dark will result in yellowed lower leaves, slowed growth and a tendency to adopt crown rot - a condition where the plant's base separates from the root system.

This genus must sit in continual moist soil, with specimens left outside or near a window being monitored frequently.  Under-watering symptoms include browned leaf-tips, stunted growth and rapidly declining foliage - be sure to place the pot around 1cm deep in water to counteract dehydration. Those situated in brighter areas will have their compost dry significantly quicker than others in cool, darker settings. Over-watering symptoms include a rotten crown, mouldy soil and yellow or brown lower leaves. Take the specimen out of its pot and inspect its root health; if you feel that root rot has taken over, be sure to visit this link!

Create a humidity tray to provide a moist and stable environment. If the surrounding saturation is too low or the heat too high, its foliage may start to brown over and curl at the tip, especially in strong light.

Many people panic over what to feed their plant. Natural prey like spiders, flies, fungus gnats, mosquitoes are the only food that they should digest. Dead insects should be avoided too, as the trichomes (pads) can detect whether or not there's something inside it, and if the prey doesn’t move, digestion won't take place. The final point to mention is never to allow it to digest something bigger than one-third of the leaf's width; the enzymes won't be able to work entirely, thus wasting vital energy from incomplete digestion.

Keep the plant outside once the nighttime temperatures are above 10⁰C  (50⁰F)  so that it can catch its own prey. There's nothing better for a carnivorous plant than to allow it to breathe, digest, and photosynthesise in the fresh outdoors without human intervention. Remember to situate it in a shaded area without the risk of high temperatures, winds or direct sunlight.

The final element for a long-lasting carnivorous plant is a vital resting period during the autumn and winter months. While keeping the soil moist, reduce insect-feeds to almost none, as wild airborne prey tends to be less in numbers during this time. Reduce the ambient temperature to around 12℃ (54℉) during the night to reinforce this critical period - even a cool windowsill will be sufficient enough. If its dormancy is served well, you'll be rewarded with a flurry of juvenile growth towards the start of the spring season.

Those that don't serve an adequate dormancy period will show signs of weak spring growth, along with a shorter life span. Always ensure your Sundew is situated in a setting with at least a few hours of direct sunlight per day to ensure its health doesn't dwindle during the cooler, darker days. 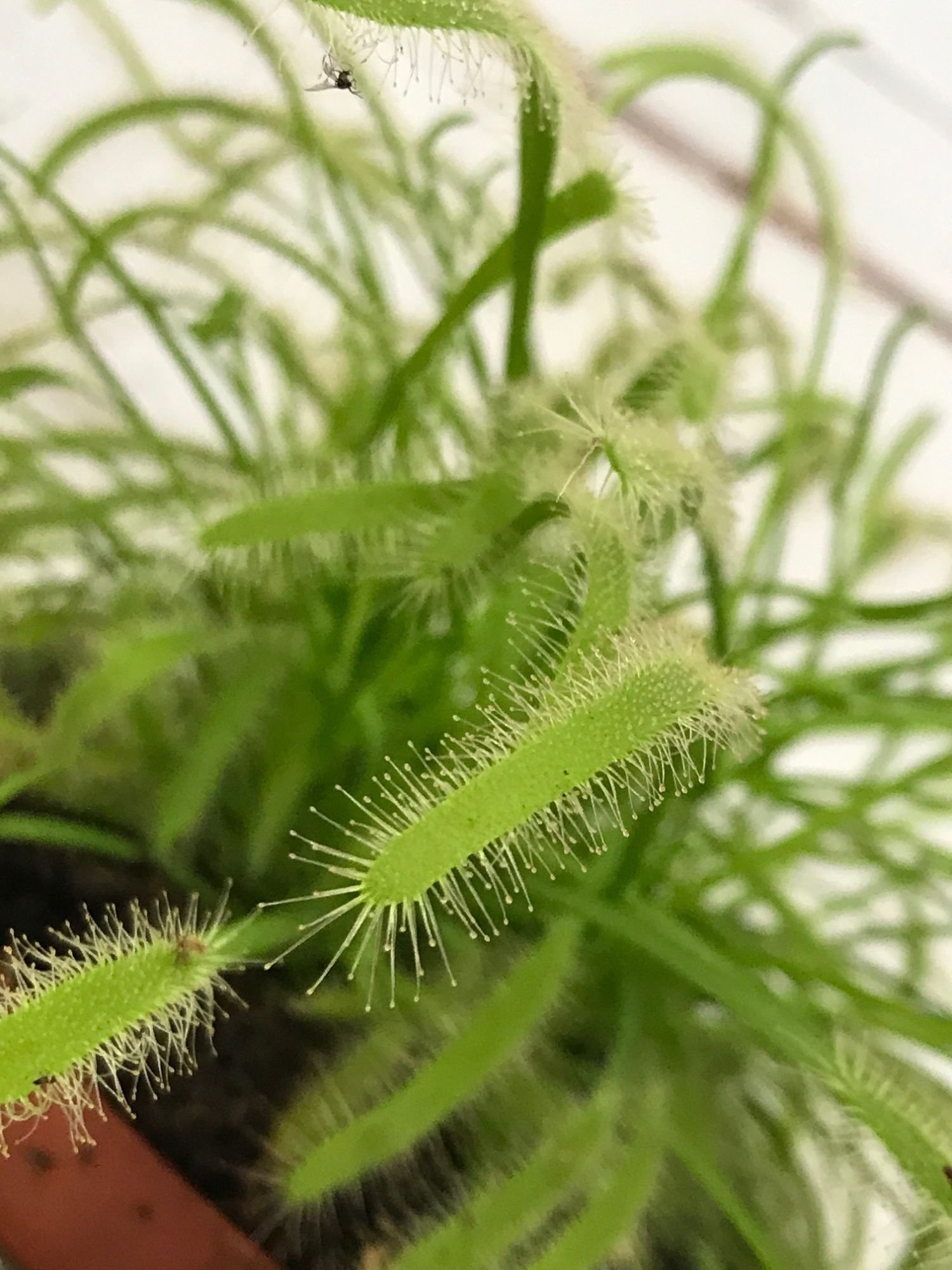 Once the insect lands on its foliage, the nearby trichomes will begin to point towards its body, encasing it in mucilaginous liquid to begin the plant's digestion.

Too little light accompanied by water-logging will cause the lower leaves to rapidly yellow and rot. Although this is a natural response to ageing on a smaller extent, persistent yellowing and a near absence of foliage should only occur during the winter. If this is the case during the height of summer, action must be taken immediately. Place the plant in a location that receives little direct sunlight out of peak hours, or outside if possible. Although it will take several weeks for the plant to start to recover, better-growing conditions with the occasional insect will significantly benefit its overall health. After few weeks, increase the amount of exposure to the sunlight by two hours. We recommend giving your Sundew at least three hours of sunlight per day to provide the necessary nutrients for reliable growth. Other causes for yellowing leaves are sun-scorch or the use of a non-carnivorous potting mix. Sundews must not be repotted into any other compost, as the chemicals will quickly lead to root-burn and inevitable death.

Under-developed or deformed leaves are caused by persistent under-watering or too much sunlight. Dry soil must be avoided at all times for success as they grow naturally in bog climates across the world. After a few weeks of a moist environment, better growth should start to develop.

Mould developing on the soil means two things - too little light and over-watering. Despite the harmlessness, it'll prove unsightly to most gardeners and is therefore removed once known. To remove, replace the top two inches of the soil for a fresh batch of 'Carnivorous' labelled compost. Either increase the amount of light received (no direct sunlight for the first few weeks to prevent environmental shock) or decrease the frequency of waters slightly. If the mould is accompanied by yellowing lower leaves, you may also have a case of root rot.

Drosera is a genus of over two hundred and forty species, ranging from the Americas to Africa, and across the Asian continent. It was first described by Carl Linnaeus in 1753, using the Greek word, drosos, meaning 'dew' or 'dew drops' that refer to the mucilage (liquid) glistening on its foliage, largely resembling morning dew. 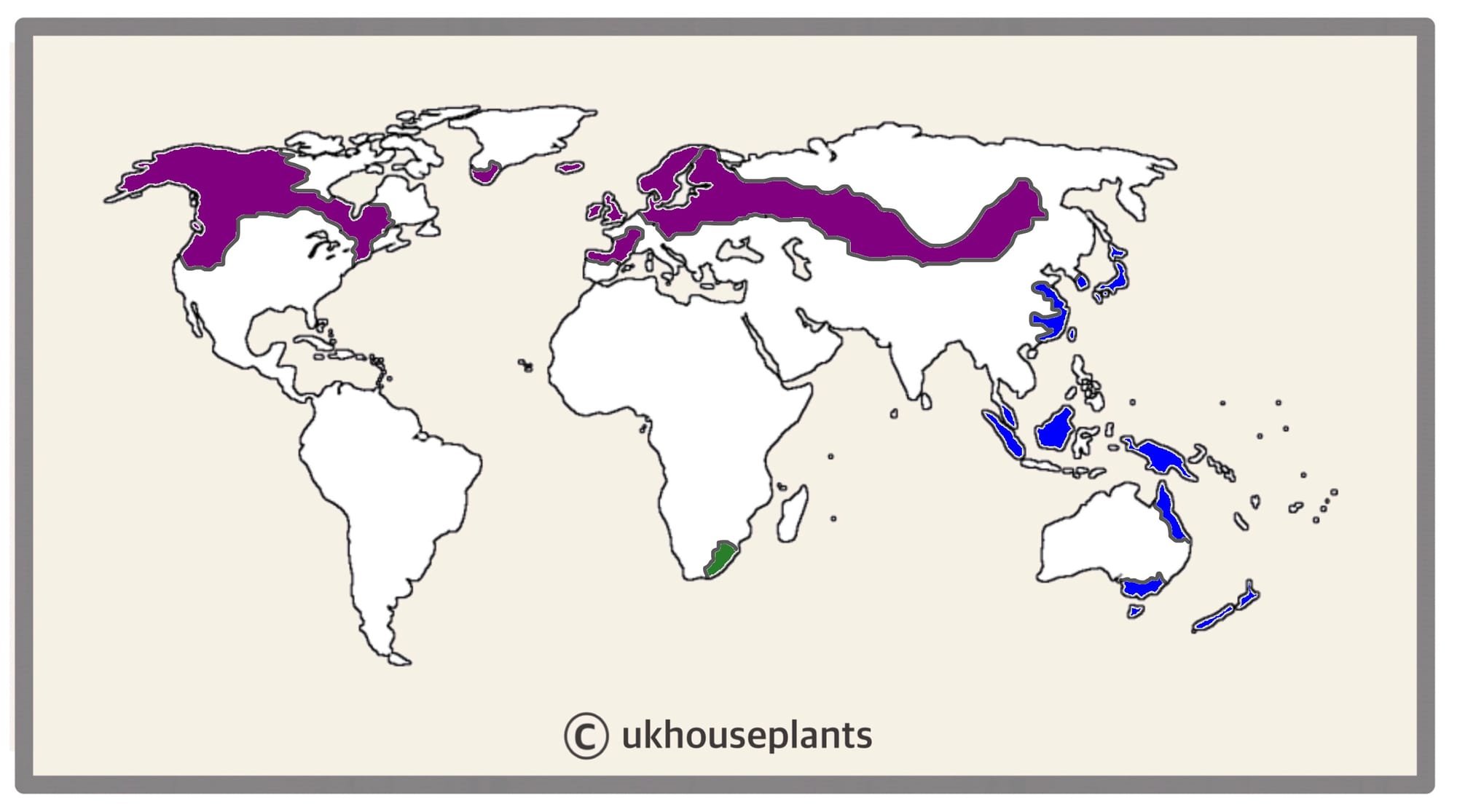 The Distribution of Drosera rotundifolia in Purple,  D. spatulata in Blue  &  D. capensis in Green.

8° - 38°C   (46° - 100°F)
H1c  (Hardiness Zone 11)  - Can be grown outdoors between late spring and summer throughout most of the UK while nighttime temperatures are above 8℃ (46℉). If you decide to bring the plant outdoors, don't allow it to endure more than an hour of direct sunlight a day as it may result in sun-scorch. Regularly keep an eye out for pests, especially when re-introducing back indoors.

Over 0.15m in height and 0.2cm in width once maturity is reached. The ultimate height will take around 5 years to achieve, but can live for over 10 years in the right conditions.

Seeds (Easy) - The only soil you can use is a Carnivorous' labelled compost, as other mixes will retain too many chemicals that'll burn the cases of the seeds. Set the seeds on top of the soil's surface, resisting the temptation to compact it. Maintain evenly moist compost and allow the excess water to freely drain from the pot's base to prevent water-logging. The ideal location for successful germination is in a bright, indirect setting with temperatures above 18℃ (64℉) with bottom-heat. Keep the pot in a transparent bag to provide a stable level of humidity, along with longer-lasting soil moisture. Germination may take up to three months, so don't discard any unsuccessful seeds until this threshold has been surpassed. Remove the bag once the seedlings produce their second leaf and then split them into their own 5cm (2 inches) pots after a further month.

Basal Offset Division (Easy) - Your plant will produce several offsets that can be separated once they have a sufficient root system. If possible, water the soil 24hrs before the main event to reduce the risk of transplant shock, when its dry root systems are over-fingered. Take the plant out of its pot and place your fingers close to the nodal junction - compost may have to be removed for better access. Push the chosen offset downwards until you hear a snap. Separate the foliage and its root system away from the mother plant, mentally noting the high risk of damage. Transplant in the appropriate sized pot with a fresh batch of 'Carnivorous' soil. Maintain evenly moist soil and situate it in a bright, indirect location away from any direct sunlight. After ten weeks, treat it like a healthy specimen, following the care tips above!

Blooms will appear in early spring, typically ahead of the new flurry of growth. Most Sundews will produce one or two flowers, lasting several days at a time. There isn't much you can do to stimulate a show of colour, as the use of flower-inflicting nutrients (like potassium) can't be used for chemical burn reasons on its roots.

Repot every three or four years in the spring, using only a 'Carnivorous' labelled compost and the next sized pot with adequate drainage. Hydrate the plant 24hrs before tinkering with the roots to prevent the risk of transplant shock. If you're still unsure of what to do, never hesitate to send us an email or direct message to get our expert advice on transplantation. Never use any other compost as the chemicals typically found in these soils will burn the roots, killing the plant outright.

Keep an eye out for aphids, blackfly, soil mites & root mealybugs that'll locate themselves in the cubbyholes and undersides of the leaves, with the exception of the latter two in the soil. Common diseases associated with Sundews are root rot, leaf-spot disease, botrytis, powdery mildew & southern blight - click here to learn more about these issues.