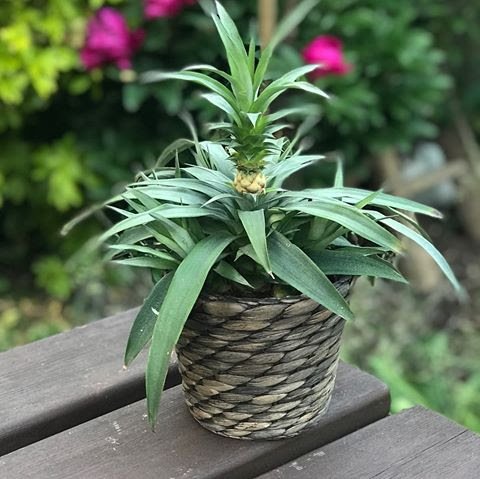 Provide a good amount of sunlight per day, especially in the winter months while daylight is to a minimal. Shadier locations around the house should be avoided at all costs as the slowed rates of drying compost will cause several issues down the line, including heart rot and southern blight.

Rehydrate once the soil's top third dries out in between waters, reducing this further in the autumn and winter. Under-watering symptoms include the yellowing or greying of foliage, stunted growth and a gradual decline of health; these issues are typically caused by too much sunlight or heat, high winds or forgetfulness with the hydrations. Over-watering symptoms include yellowing older leaves, mouldy compost, a rotten stem, soft fruit and plantlet death. It's always better to under-water a Pineapple Plant than over-do it due to its impressive ability to withstand short-lived droughts. For those who feel that root rot has fully taken over, be sure to read around the situation via this link.

Throughout the spring and summer, be sure to use a houseplant-labelled fertiliser, reducing this to every six weeks in its dormancy period. If your specimen is in fruit, we recommend swapping this for a feed high in potassium for the better development of fruit. An excellent example of this would be tomato food or a 'flowering plant fertiliser'.

A lack of fruit from a non-flowered specimen is caused by immaturity or an insufficient dormancy period, where the temperatures are kept more or less the same over the year. Reduce the temperature by a couple of degrees over the autumn and winter months, along with fewer irrigations to ensure a well-spent dormancy.

Yellowing older leaves (closest to soil) and crown rot are a clear sign of over-watering, usually caused by too little light. People don't realise that a plant's root system needs access to oxygen too; when soil is watered, the air will travel upwards and out of the potting mix. A lack of accessible oxygen for the roots will cause them to subsequently breakdown over the oncoming days. Click on this link to learn more about root rot and how to address it.

Curled leaves and dried brown edges are the result of too little water and over-exposure to the sun. Although Pineapple Plants can naturally do well in sun-filled locations, those that haven't acclimatised to the harsh rays will show signs of sun-scorch and environmental shock. Gradually increase the amount of light every few days, starting from an indirect location to a few hours of morning/evening sun over a few weeks. Prolonged exposure will significantly speed the process of dehydration, so consider transplantation into a bigger pot in the spring to wrap the roots around moister soil.

Mould developing on the soil means two things - too little light and over-watering. Despite the harmlessness, it'll prove unsightly to most gardeners and is therefore removed once known. To remove, replace the top two inches of the soil for a fresh batch of Cactus & Succulent Compost. Either increase the amount of light received (no direct sunlight for the first few weeks to prevent environmental shock) or decrease the frequency of waters slightly. If the mould is accompanied by yellowing lower leaves, you may also have a case of root rot.

Christopher Colombus first discovered the Pineapple Plant back in 1493 during a voyage to Leeward island of Guadeloupe, initially noting the species as piña de Indes ("Pine of the Indians"). Since its discovery, the fruit has been introduced to many regions of the world, including India (15th century) and the Philippines, Hawaii, Guam and Zimbabwe in the 18th-century. The term 'pineapple' came from the initial resemblance to the pinecone when European explorers re-described the species in 1664. The binomial name, Ananas comosus, comes from the Tupi word for 'excellent fruits', with comosus meaning 'tufted' that refers to the fruits' stem. 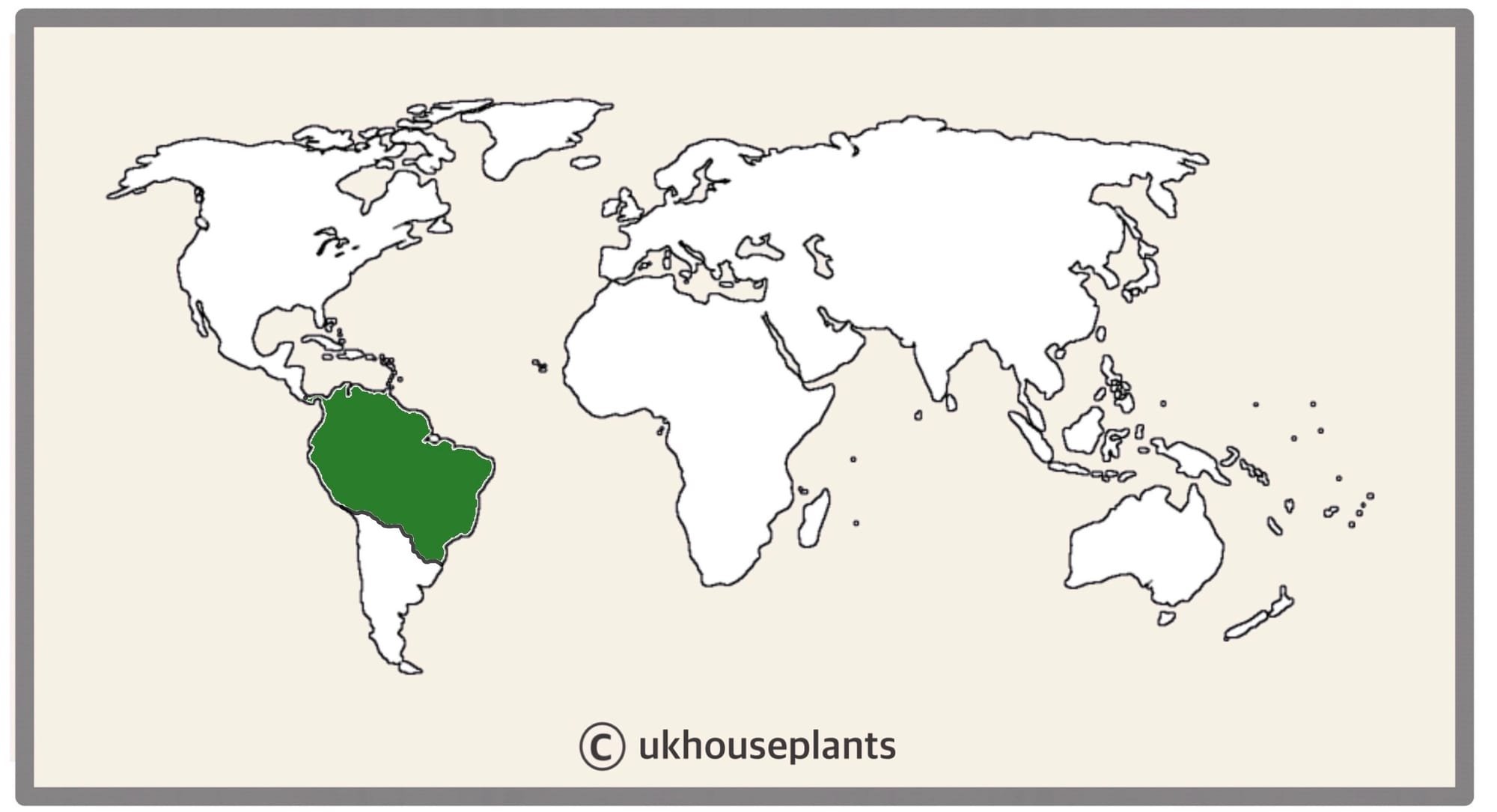 The Distribution of Ananas comosum

8° - 30°C   (46 - 86°F)
H1c  (Hardiness Zone 11)  - Can be grown outdoors between late spring and summer throughout most of the UK while nighttime temperatures are above 8℃ (46℉). If you decide to bring the plant outdoors, don't allow it to endure more than an hour of direct sunlight a day as it may result in sun-scorch. Regularly keep an eye out for pests, especially when re-introducing back indoors.

Up to 50cm in height and 40cm in width, with maturity being reach in around 8 years. Growth rates are particularly slow, especially with newly-propagated pups or diseased specimens.

Basal Offset Division (Easy) - Your plant will produce several basal offsets that can be separated once they have a sufficient root system and surpass the mother plant's height by half. If possible, water the soil 24hrs before the main event to reduce the risk of transplant shock, when its dry root systems are over-touched. Take the plant out of its pot and place your fingers close to the nodal junction - compost may have to be removed for better access. Push the chosen offset downwards until you hear a snap. Separate the foliage and its root system away from the mother plant, mentally noting the high risk of damage. Transplant in the appropriate sized pot with a fresh batch of Cactus & Succulent Compost. Maintain evenly moist soil and situate it in a bright, indirect location away from any direct sunlight. After four weeks, treat it like a healthy specimen, following the care tips above!

For Crown Propagation (Moderate), choose a pineapple from the local store that still has it's central intact (i.e. those with spiky green growth directly at in the well/crown). Brown leaf-tips shouldn't be much of an issue, as long as it hasn't travelled to the core. While using a clean knife, make a clear, straight cut exactly between the fruit and the foliaged-crown - discard if there is a brown core. Place the bottom quarter into lukewarm water, avoiding submersion the whole piece for hygiene and anaerobic reasons. After several weeks, you should observe little white root-heads developing on the wound, and once they are 3cm (1.1 inches) in length, transplant the bottom quarter into a Cactus & Succulent Compost. Maintain evenly moist soil and situate it in a bright, indirect location away from any direct sunlight. After twelve weeks, treat it like a healthy specimen, following the care tips above! 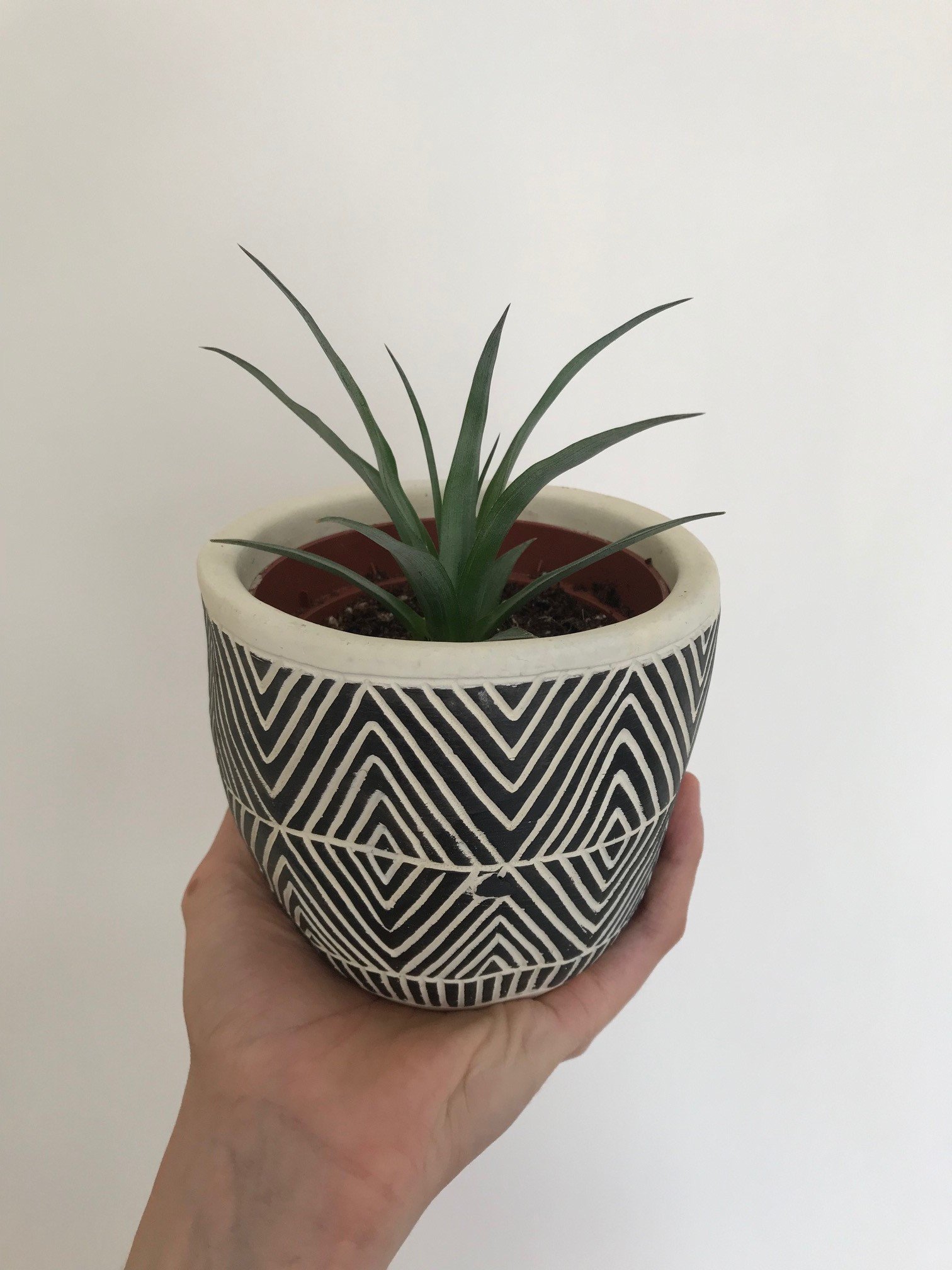 The individual Pineapple plant will only fruit once, but as mentioned above, offsets will form between the lower leaves that'll eventually produce their own fruit in years to come. Its fruit can be up to 40cm in length and should last for around three months in the correct environment. Unfortunately, due to the unfavored growing conditions of too little light and temperature fluctuations, a recently-purchased Pineapple won't grow much larger and therefore should be admired by its current size.

Repot every three years in spring using a Cactus & Succulent Compost and the next sized pot with adequate drainage. Hydrate the plant 24hrs before the tinkering with the roots to prevent the risk of transplant shock. Add a thin layer of small grit in the pot's base to improve drainage and downplay over-watering. Click here for a detailed step-by-step guide on transplantation, or via this link to learn about repotting with root rot.

Keep an eye out for mealybugs, spider mites, scale, thrips & root mealybugs that'll locate themselves in the cubbyholes and undersides of the leaves, with the exception of the latter in soil. Common diseases associated with Pineapple Plants are root rot, leaf-spot disease, marbling, Phytophthora heart rot, botrytis, rust, powdery mildew & southern blight - click here to learn more about these issues.