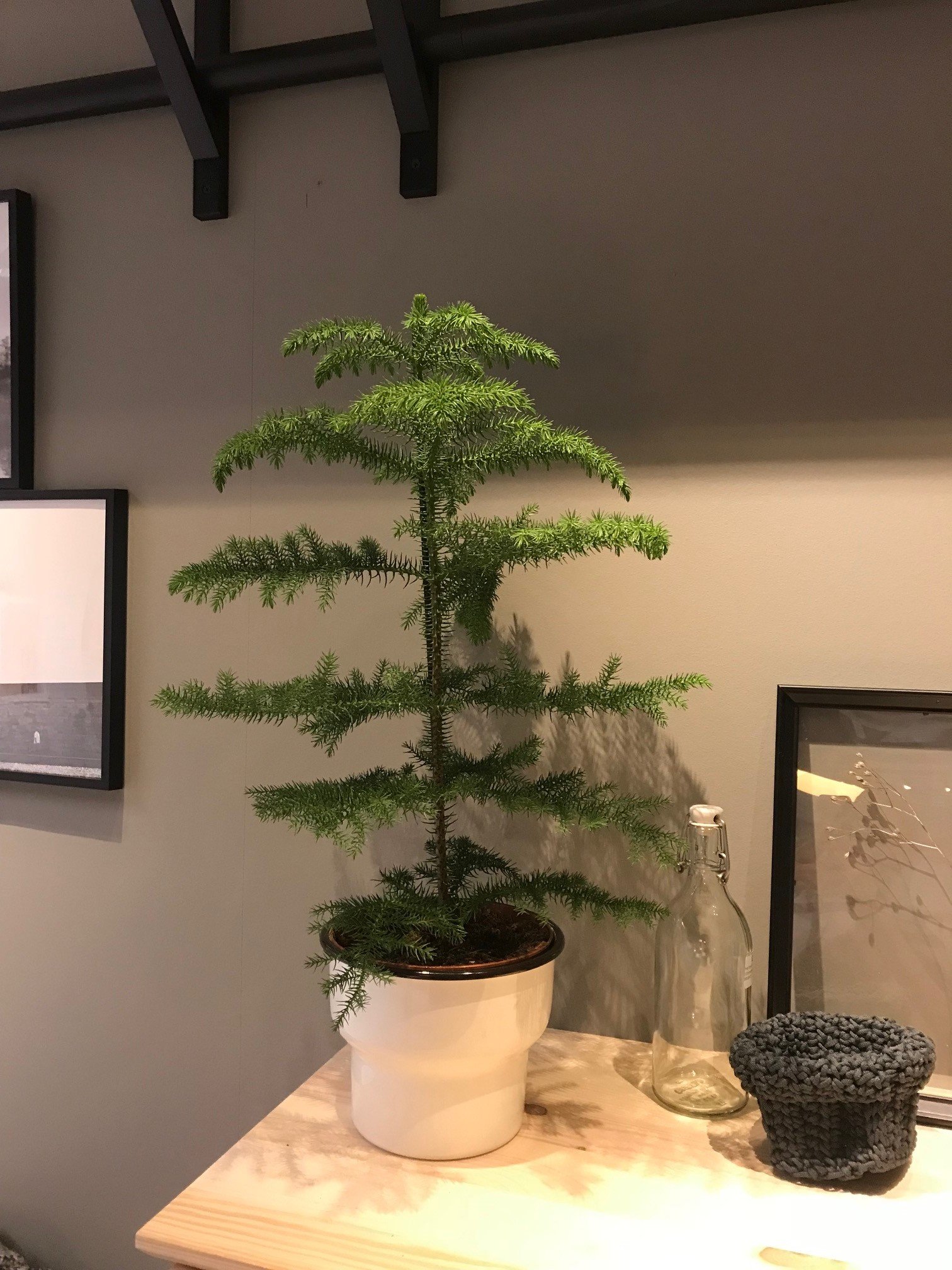 A location with around two hours of morning or evening sun is the ideal setting for this species. Although direct sunlight is quite beneficial for this pine, over-exposure will result in sun-scorch that'll considerably weaken the plant over time. Avoid situating one in an overly shady location that's several metres from a window, and for those who are worried about its location being too dark, if a newspaper can be read while having your back towards the light source, you're good to go!

Supplement every two to four weeks during the spring and summer, and monthly for the rest of the year. The best feeds are those that favour nitrogen & phosphorus over potassium - BabyBio or Miracle-Gro is ideal, but a seaweed-based fertiliser is also good. Try not to over-supplement the soil due to the species' sensitive nature to the sharp chemicals. 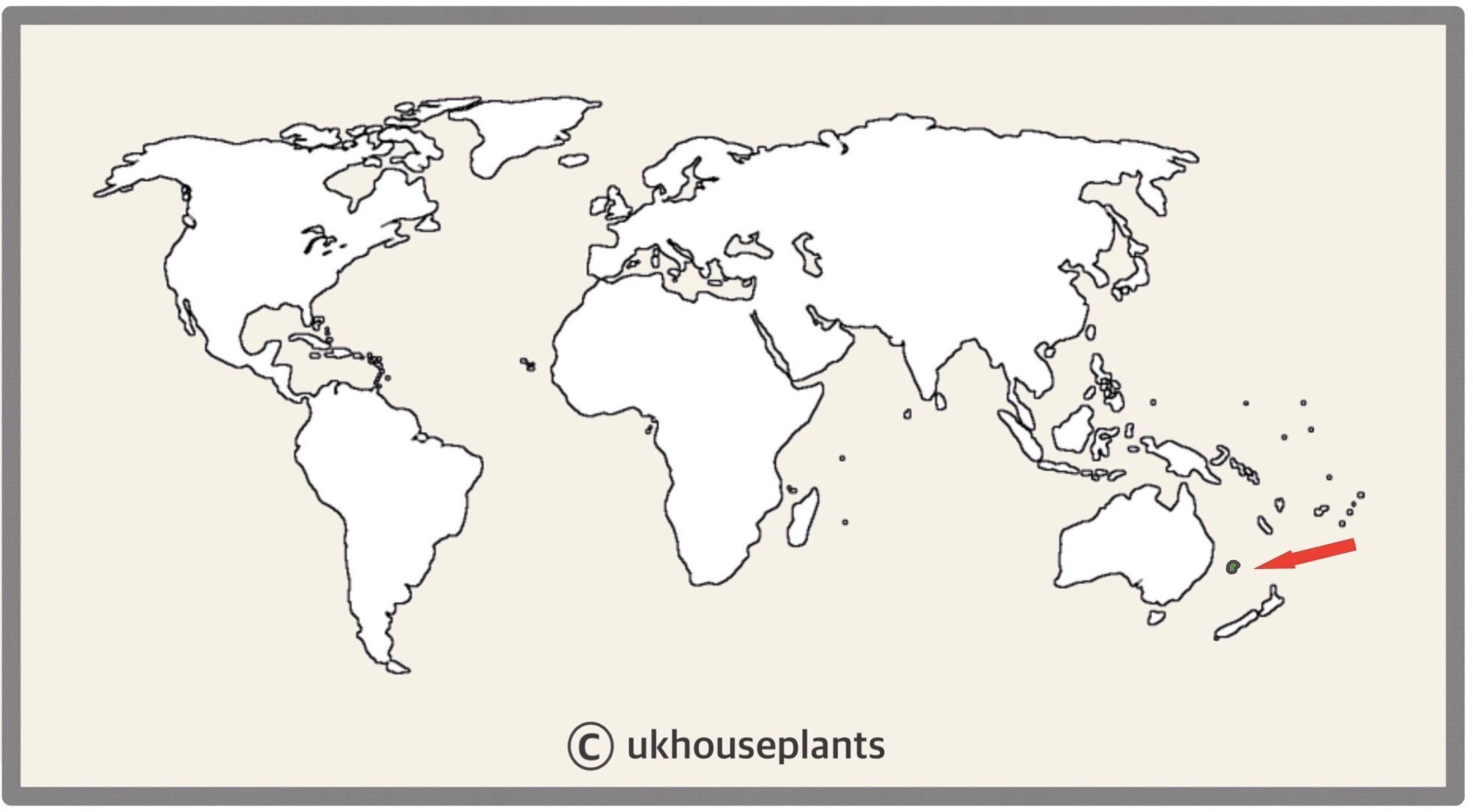 The Distribution of Araucaria heterophylla in the Norfolk Islands.

8° - 25°C   (46° - 78°F).
H1c  (Hardiness Zone 11)  - Can be grown outdoors between late spring and summer throughout most of the UK while nighttime temperatures are above 8℃ (46℉). If you decide to bring the plant outdoors, don't allow it to endure more than an hour of direct sunlight a day as it may result in sun-scorch. Regularly keep an eye out for pests, especially when re-introducing back indoors.

Norfolk Pines can be difficulty propagated via 12cm (4.7cm) stem cuttings in early spring. Take lateral growths that have a slightly wooded base, but still juvenile to bend. Be sure to use a clean pair of scissors or secateurs, empathising a clean cut to avoid damaging the wound. Remove the bottom half of the needles and dip the wound in rooting hormone and position them vertically half-deep in a sandy, well-draining potting mix. The ideal compost is a houseplant potting mix, but multipurpose soil with some added grit and perlite is also acceptable. Provide a warm location (20°C, 67°F) that offers bright, indirect light. It's essential to have a good level of humidity by placing the cuttings and their pots in a plastic bag to reduce the amount of water-loss via respiration in the needles. Open the bag every few days for an hour to avoid the spread of bacteria that can destroy a whole batch. Remove any dead or decaying matter and avoid water-logging or persistent droughts at all costs. Once the cuttings have 2cm (0.8 inches) roots, safely place them in 7cm (3 inches) pots that have adequate drainage; the rooting process can take around two months with new foliar buds taking even longer.

Repot biannually in spring using a houseplant-labelled and the next sized pot with adequate drainage. Hydrate the plant 24hrs before the tinkering with the roots to prevent the risk of transplant shock. For those that are situated in a darker location, add a thin layer of small grit in the pot's base to improve drainage and downplay over-watering. Click here for a detailed step-by-step guide on transplantation, or via this link to learn about repotting with root rot.