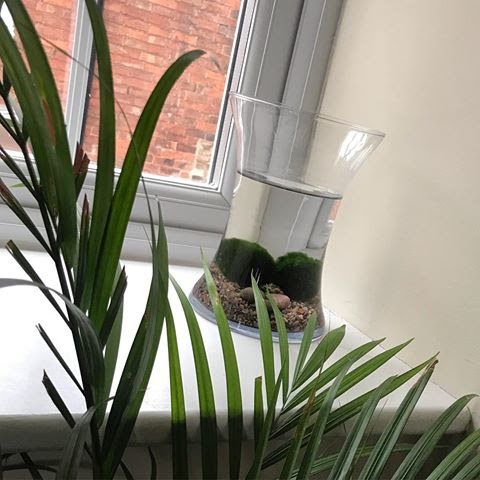 Avoid the direct sunlight at all costs; if your balls (pardon the pun) start to brown and die, it's most likely to do with its environment. Similarly, environments that are too dark will also not benefit the specimen either, as their only source of nourishment is via the natural lighting. A north-facing window or overhead lighting is the ideal spots, or within a metre of a grow light. Placement near to a radiator is also acceptable.

An online search into how to hydrate the Moss Balls will bring up an array of differing answers. Some will change only a third of the water per week, whereas others replace the whole lot. For those wondering, ukhouseplants replace a third of the water at weekly intervals, and then a thorough change once a month. Regardless of which method you decide to use, always present good water hygiene, as failure to do so will cause the development of rot. Introducing them with too cold or warm water can also inflict stress, resulting in weak growth and possible death. To replace the water, be sure to use either fresh bottled water, tap water that has allowed to sit for over 24hrs, or well-stored rainwater. Do not collect the latter if you regularly have issues with pest larvae or disease in the area.

A satisfactory amount of indirect light and hygiene is all that's needed for success. Introducing some shrimps will bare great success as the crustaceans will feed off them, excreting beneficial substances that'll be absorbed by the plants. Never apply a fertiliser unless it explicitly states the species name on its packaging.

Once a fortnight, remove the balls and place them in another bowl of lukewarm water. Gently squeeze or roll them to remove the thin layer of dirt from its outer coat, and relocate them back into their original vase. As mentioned before, replace at least a third of the water per week to prevent the spread of bacteria. 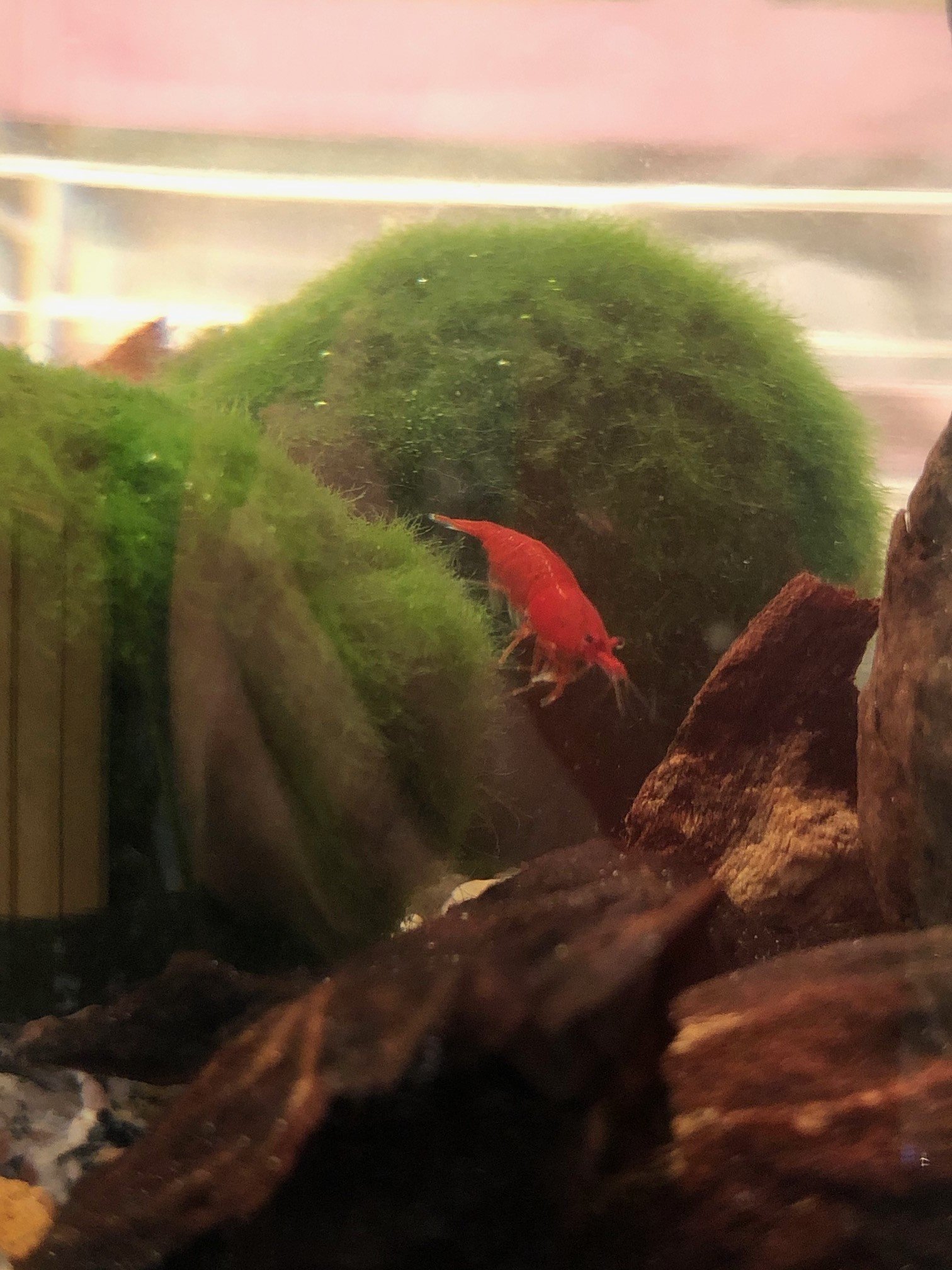 The Cherry Shrimp is the perfect companion for a Marimo; not only will they feed on dead matter from the balls, but the moss itself will cleanse the water and filter out certain toxins for the crustaceans, too!

Poor water hygiene should be prevented as the Balls will develop brown patches that'll feel mushy when touched. Replace at least a third of its water to prevent unhealthy bacteria from festering on the surface.

Oddly shaped balls are the result of unbalanced phototropism, so roll them over 180º every few weeks to aid wholesome growth.

Direct sunlight must be avoided at all costs; if the intense rays fall onto the glass container, you run the high risk of severe sun-scorch. Alternatively, a dark location should be off the cards also, as algae rely heavily on the nutrients sourced by the sun.

Dust can fall onto the foliage, resulting in slight discolour of its surface. Gently squeeze and massage the balls in a separate bowl of lukewarm water to remove all of the dirt, before replacing into its original container. This should be done at fortnightly intervals.

Finally, be sure not to over-submerge your specimen. Those kept more than 12cm (5 inches) below the water's surface are most at risk of developing brown and mushy sections, which can eventually travel to its core and render complete death. If yours has this issue, carefully pull off the affected areas with your fingers and bring the waterbed closer to the surface. Increase the light levels and frequency of water-replacement to avoid such issue happening again. When caught early enough, the specimen will continue to thrive and grow for many years to come. 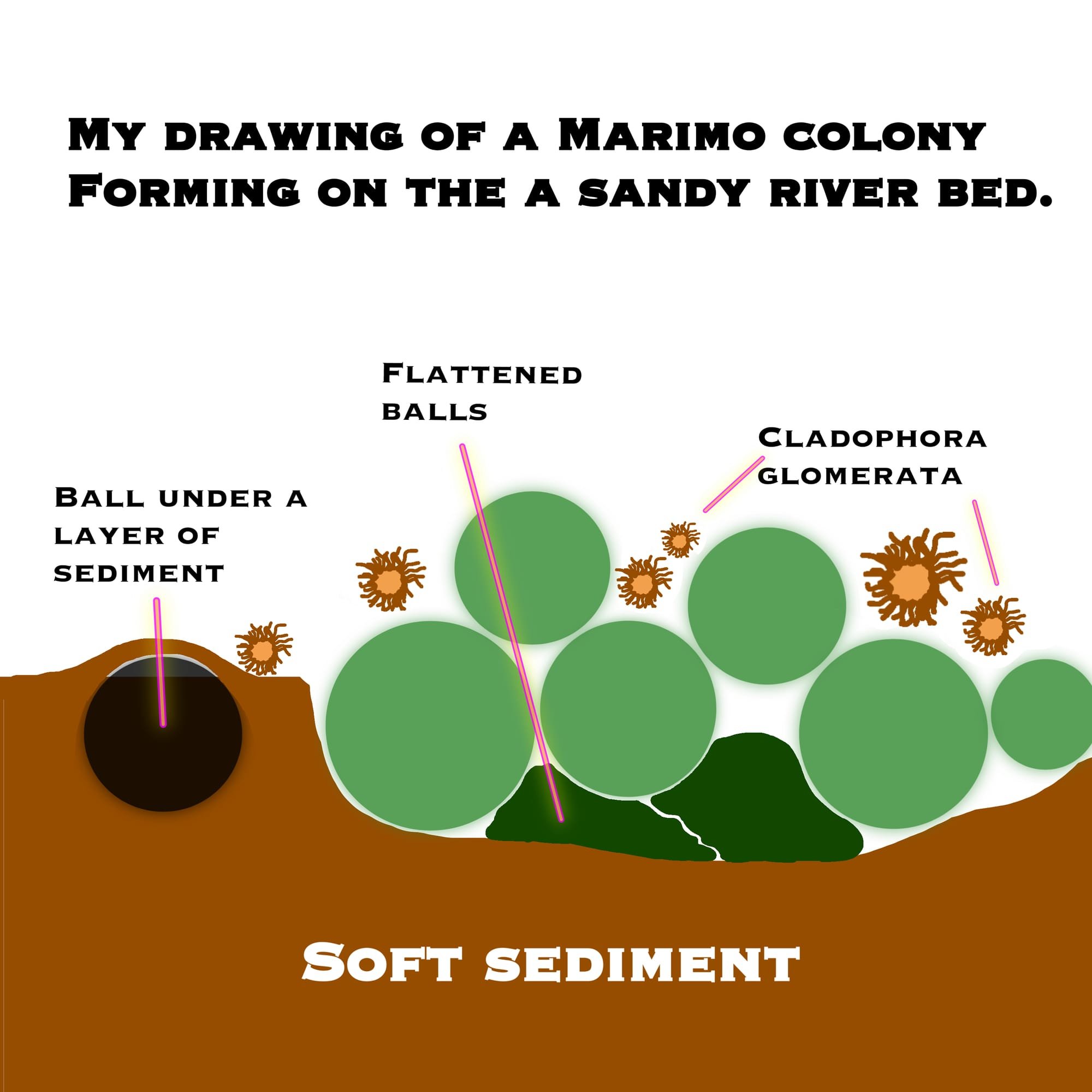 There are three ways in which Aegagropila can grow in the wild; on rocks, via free-floating or into spherical balls. (Copyright: ukhouseplants.com)

Marimo Balls can only be found in freshwater rivers in Japan and northern Europe, most notably around Iceland. The species were first described in the 1820s by the Austrian botanist, Anton E. Sauter in Lake Zell, Austria. Despite first impressions of the species belonging to the Aegagropila genus, Friedrich Kützing moved the species to Cladophora in 1849. It wasn't until 2002 after extensive DNA testing that the species was returned to the once defunct genus of Aegagropila of the 19th century. The name, Marimo, is from Japanese, with 'mari' translating to bouncy ball and 'mo' is a general term for plants grown in water; the generic name, Aegagropila, derives from ancient Greek to mean "goat hair".

Did you know that Marimo's can live for over one hundred years, reaching a grand diameter of one foot! 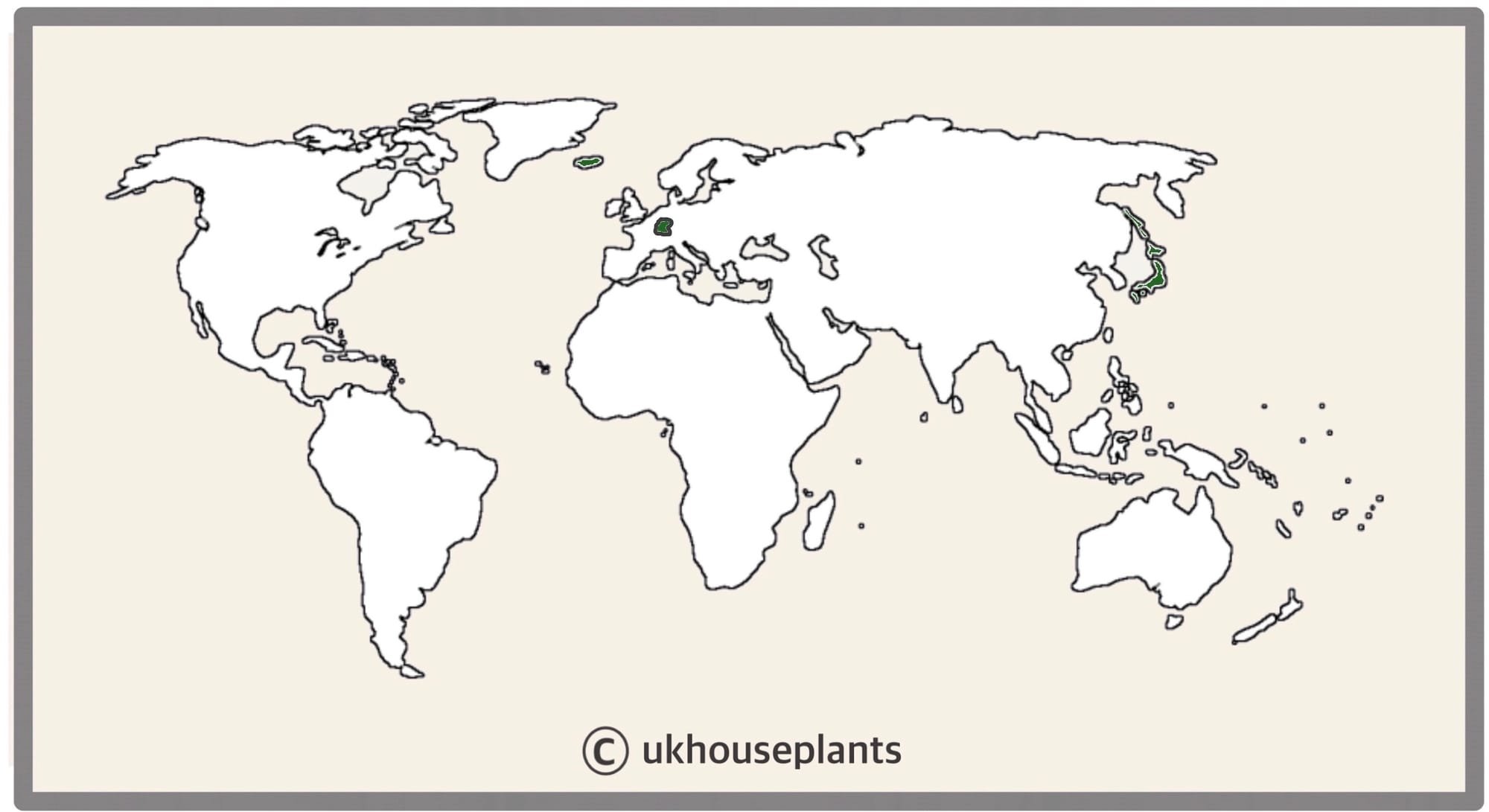 The ambient temperature should be maintained around 18°C - 25°C   (64° - 77°F).
H1a - Must be grown as a houseplant or under glass all year round. Do not allow temperatures to dip below 15℃ or permanent damage may occur that'll take years to rectify.

Most specimens purchased at a shop will be around 10cm in diameter, but can grow to 15cm in diameter over a span of thirty years. Moss Balls tend to grow at the rate of 5mm per year.

Propagation can be undertaken by splitting it in half. During spring, cut directly into the middle, using a clean knife or pair of scissors. This method of propagation can only be done on specimens that are over 3cm in diameter, as smaller specimens may not rejuvenate.

Moss Balls will never flower and can only be propagated by splitting its body. See the section above for more information.

There are few known diseases associated to this species, with rotting sections of the ball occurring if unsanitary conditions are present. Remove the affected areas with your hands and improve the water hygiene; remember to provide a brightly lit location with minimal direct sunlight.