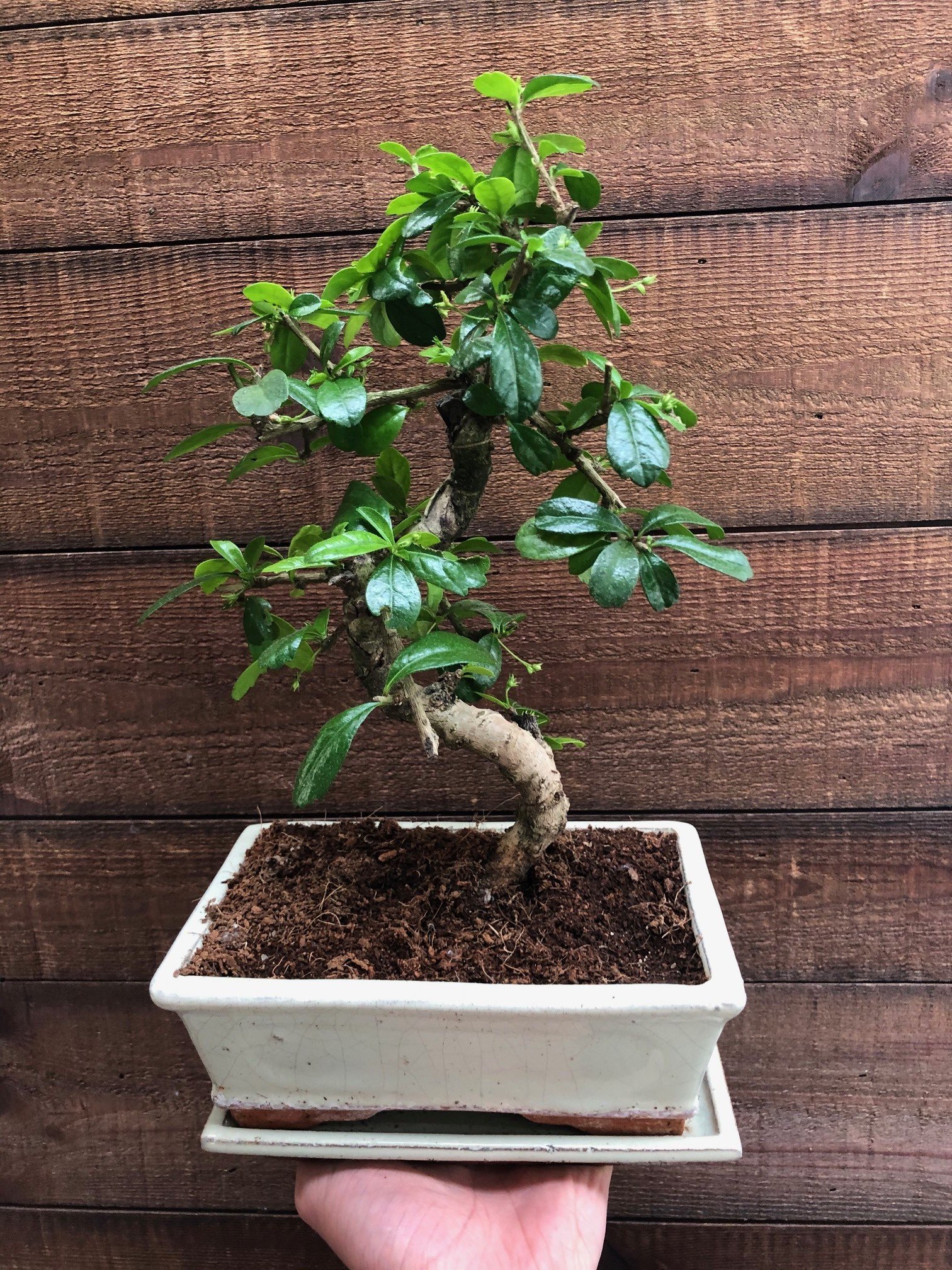 The combination of good soil moisture with a bright, indirect light location will provide the best results for your Bonsai. Sunny areas should be avoided at all costs as prolonged exposure to the harsh rays, or persistent under-watering will result in pale leaves, stunted growth and gradual decline. If it's too hot for a chocolate bar, it'll also be too hot for the plant!

Maintain evenly moist compost, allowing the top layer to dry out in between waters. Persistent droughts or drying soil will significantly increase the chance of dehydration and death as its shallow pots won't retain moisture for long. Under-watering symptoms include stunted growth, dry patches appearing on its leaves and yellowing older leaves; these issues are either due to an over-crowded pot, too much light or forgetfulness. If severe dehydration occurs, introduce a humidity tray and create a watering-schedule/reminder to avoid further destruction. Over-watering symptoms include yellowing lower leaves, mouldy/heavy soil & stunted growth. These issues are typically caused by inexperience, low temperatures or not enough natural light. Take the specimen out of its pot and inspect its root health; if you feel that root rot has taken over, be sure to visit this link!

Fertilise every four waters during the growing period before reducing this to every six in the autumn & winter. Although an all-round 'Houseplant' fertiliser will still do the job, we'd recommend using a specific 'Bonsai' labelled fertiliser as it'll support the vital thirteen nutrients that this species will need to grow. 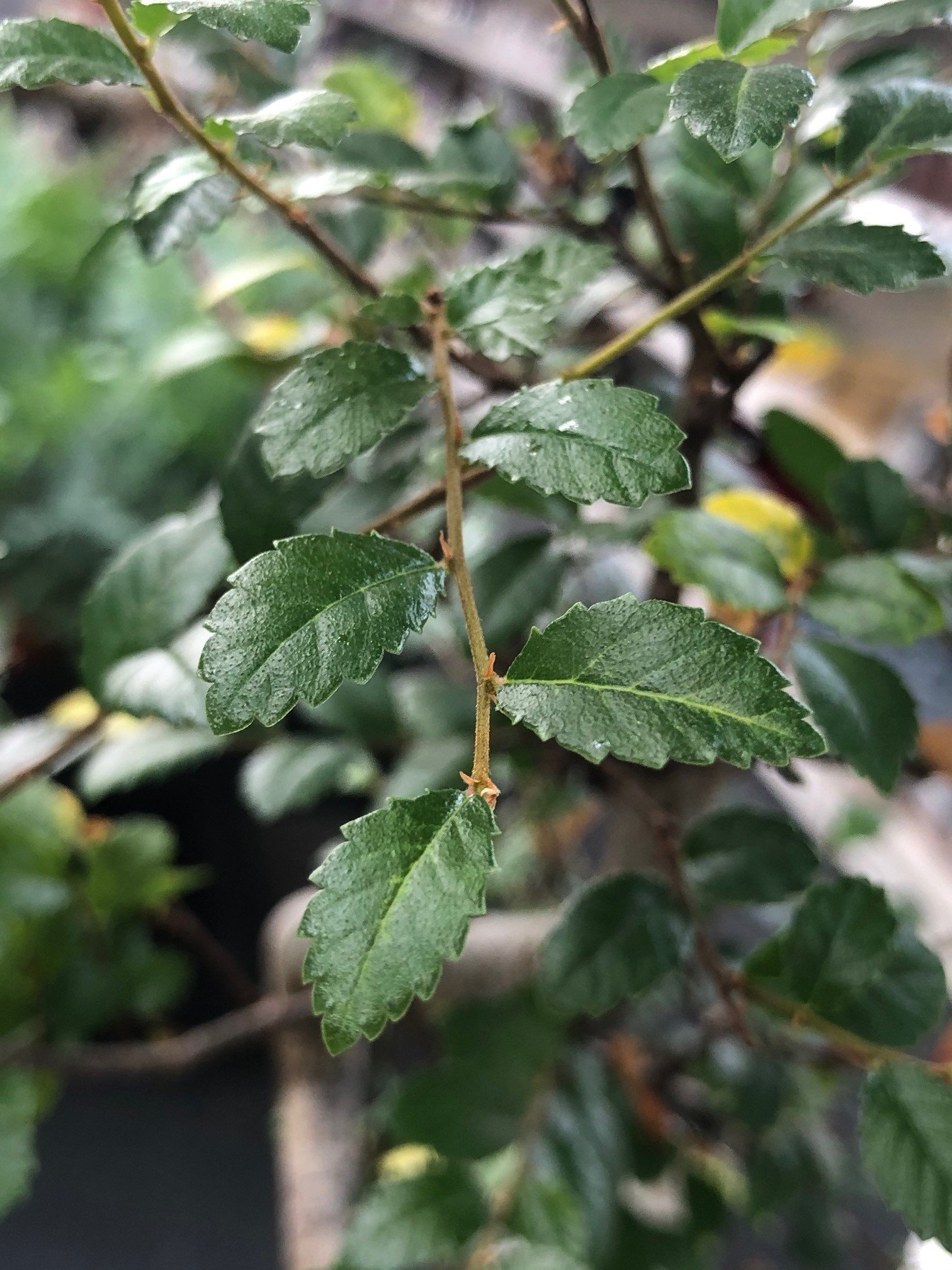 A general rule when purchasing a Bonsai is to know that thinner-leaved specimens (Like Carmona or Chinese Elm, pictured) are less tolerable to dehydration compared to Ficus alternatives.

When a Bonsai is severely dehydrated, most of its leaves will yellow and fall off - leaving you with a naked plant. Although it may spell the end of juvenile plantlets, there may still be light at the end of the tunnel for more established specimens. If its stem is still plump without any signs of retraction, prune-away the severely affected areas and contain the plant (with its pot) in a transparent bag that has small holes. Keep the soil continually moist, providing a good level of indirect light and temperatures above 15°C (59°F). After a few weeks, new life will form in the nodal junctions on the stems, signalling the start of its recovery process. Maintain a sealed environment for the following month until you feel it's necessary to release it back into the open air. For the prevention of environmental shock, be sure to introduce a humidity tray for higher levels of atmospheric moisture around the plant in its new setting. Not only will this ease the specimen back into healthy functioning life, but it'll also reduce the rate of transpiration (water-loss in the leaves), and therefore downplay the risk of dehydration and further decline.

Root rot is another common issue with specimens sat in too moist or waterlogged soil for long periods. Symptoms include rapidly yellowing leaves, stunted growth and a rotten brown base - please note that under-watering will cause yellowed leaves, too. Take the plant out of the pot and inspect health below the soil line. If the roots sport a yellow tinge, you're good to go, but if they're brown and mushy, action must be taken immediately. More information about addressing root rot can be found on this link.

Mould developing on the soil means two things - too little light and over-watering. Despite the harmlessness, it'll prove unsightly to most gardeners and is therefore removed once known. To remove, replace the top two inches of the soil for a fresh batch of 'houseplant' compost. Either increase the amount of light received (no direct sunlight for the first few weeks to prevent environmental shock) or decrease the frequency of waters slightly. If the mould is accompanied by yellowing lower leaves, you may also have a case of root rot. 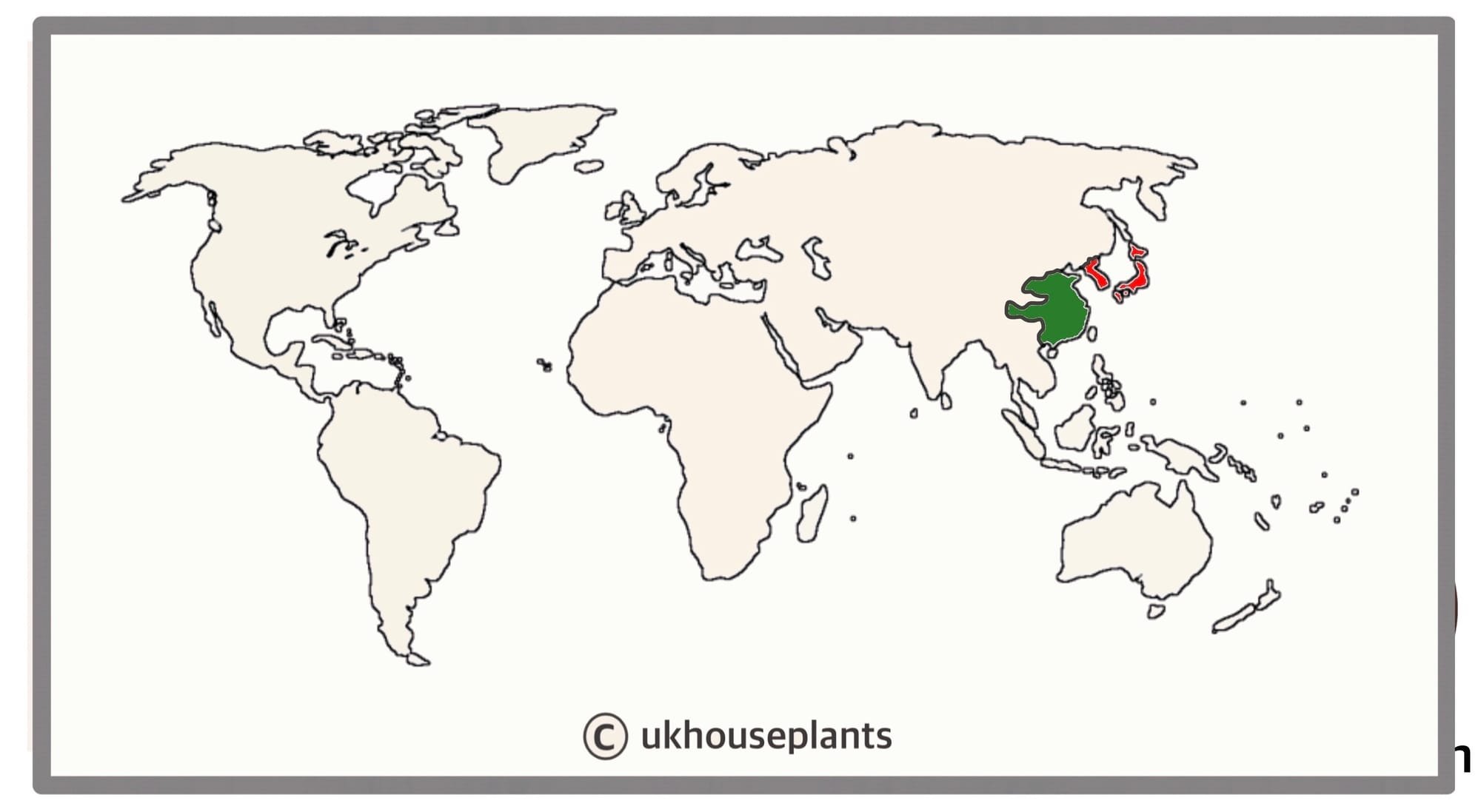 The Historical Distribution of Bonsai Art, from the seventh-century in China (Green) to the twelve-century in Japan & Korea (Red). 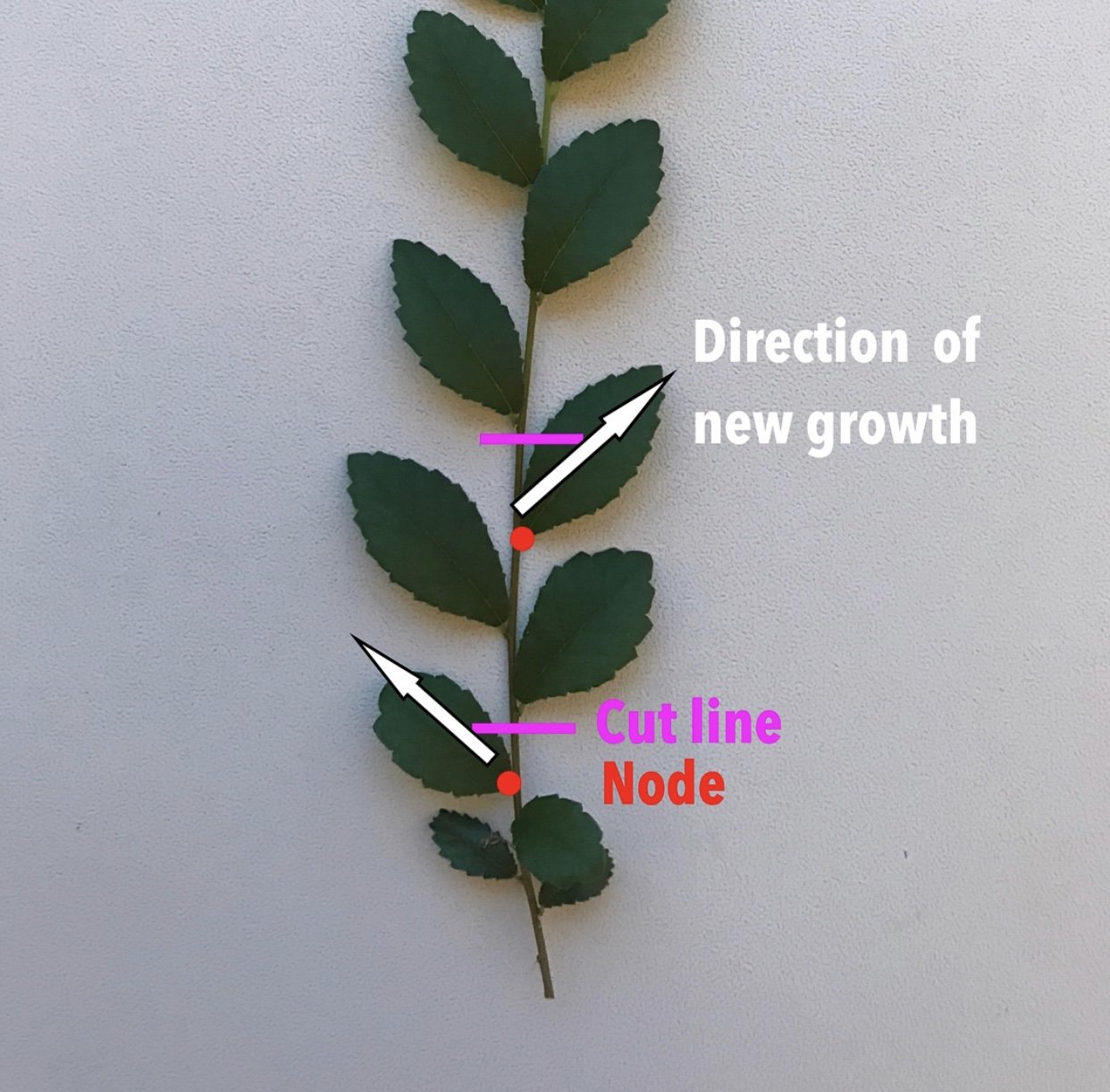 ukhouseplants' depiction of where to direct the growth of an alternate Bonsai. Please note this can only be performed on 'Alternate' growing specimens. 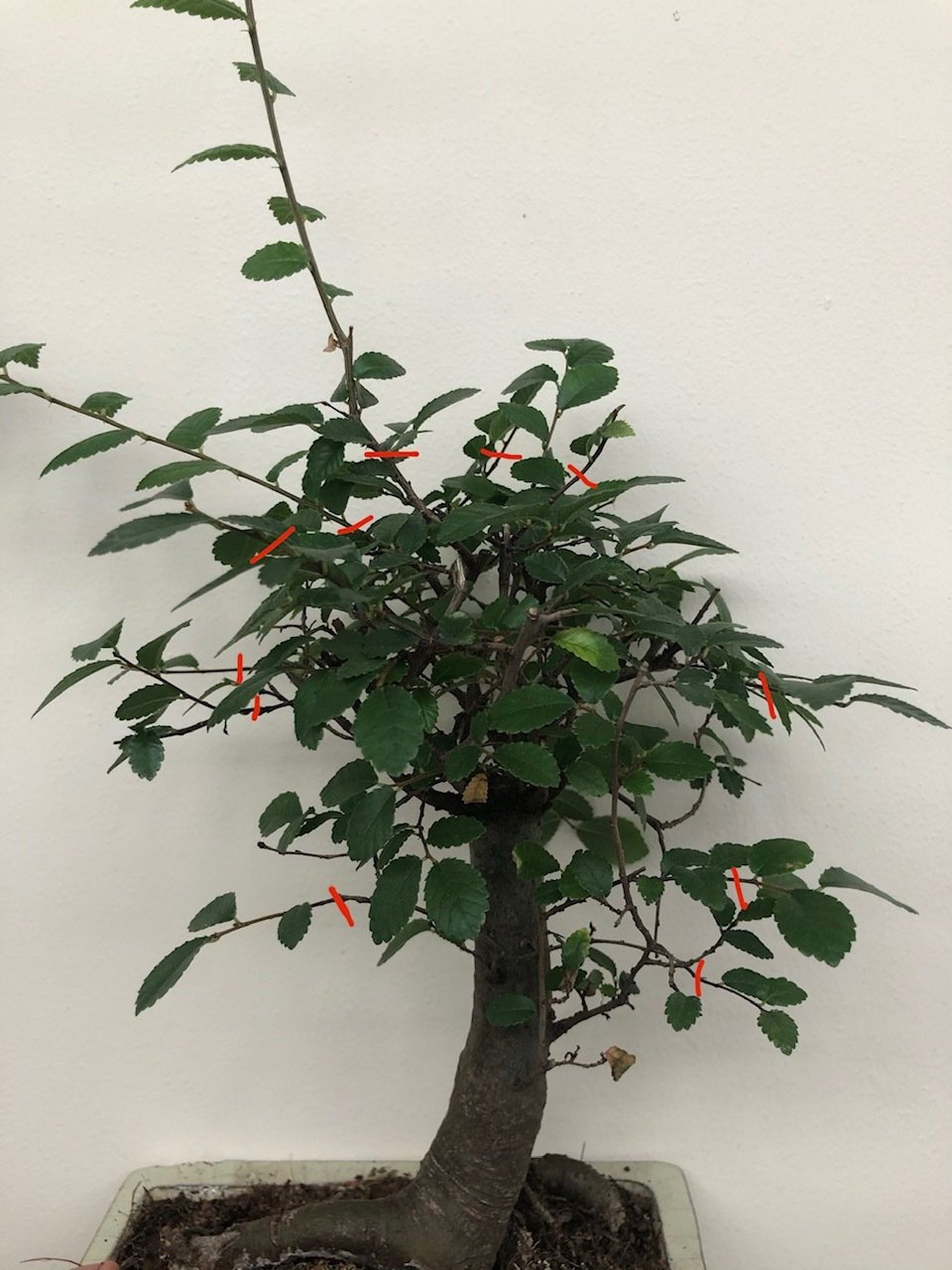 Example 1 of how to prune a slightly leggy Bonsai. 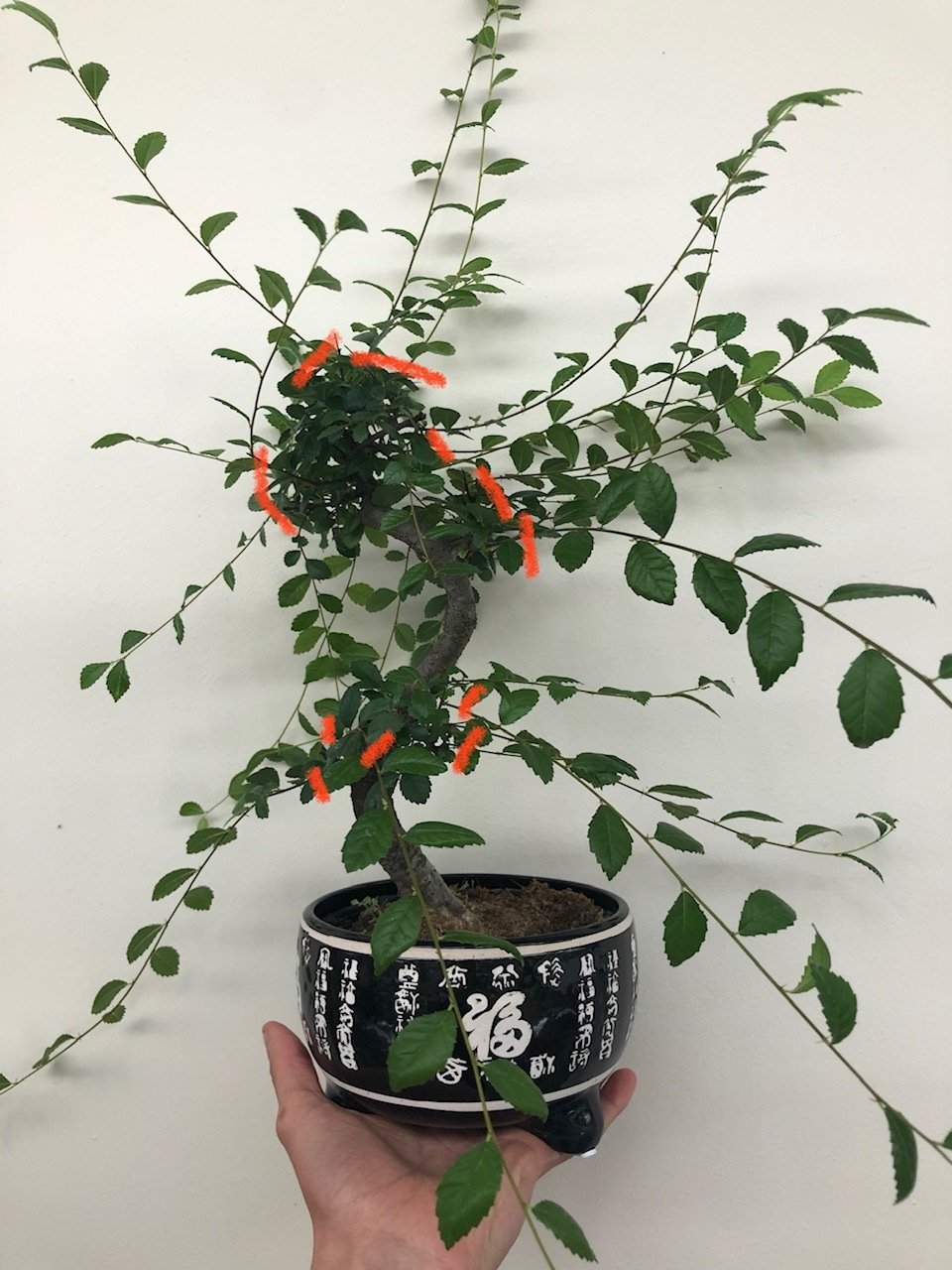 Stem & Eye Cuttings (Hard) - This method of propagation is troublesome without the aid of bottom-heat and a controlled environment. Choose the healthiest, most established stems that are wooded, yet still juvenile enough to bend slightly, being just thicker than a pencil. Each cutting should only have ONE leaf, and a small portion of the stem to either side of the node. Cut directly below a node using a clean knife to reduce bacteria count. Situate the cutting into moist 'Houseplant' compost, with the only the leaf sticking out of the soil. Blackleg can occur when the bottom wound becomes infected, resulting in propagation failure - typically caused by water-logging or a too-damaged wound. Maintain bright light and evenly moist soil with the avoidance of direct sunlight or cold draughts. Wrap the pot (& foliage) in a transparent bag or within a miniature greenhouse, and provide bottom hear of temperatures above 18°C (54°F). Remove the bag and place into individual 7cm (3 inches) pots once the second new leaf emerges. Follow the same care routines, as mentioned in the article's top half. This method will take up to five months, so patience and the correct environment are paramount for success!

Although most specimens won't flower, Carmonas will readily flower in the spring if it's exposed to persistent droughts and cool winter temperatures. Small inflorescences will develop along the unwooded stems, lasting up to three weeks with each white flower lasting up to seven days.

Repot every two years in the spring, using either a 'Houseplant' or 'Bonsai' labelled compost and the ORIGINAL container. Hydrate the plant 24hrs before tinkering with the roots and remove the specimen from its pot afterwards. Reduce the rootball by a third with a clean pair of scissors to keep the plant within its desired size. Add a layer of the compost in the pot's centre and rest the specimen onto the new soil. Fill the gap between the roots and pot with some further compost, gently tapping either side to remove any air pockets. For those that have signs of root rot, click on this link to learn more about this issue.

Most Bonsai are classified as poisonous, and if parts of the plant are eaten, vomiting, nausea and a loss of appetite could occur. Consumption of large quantities must be dealt with quickly; acquire medical assistance for further information.