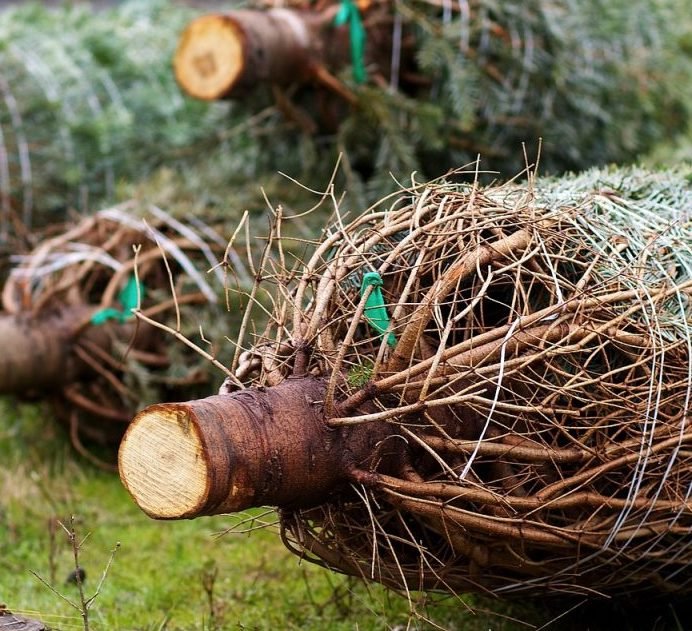 Once a Christmas tree is cut from its rootstock, it'll begin losing energy and water stored in the stem. The maintenance of a healthy, long-lasting tree has several elements to it; a continued supply of water, a moist surrounding and an avoidance of direct light or nearby radiators. Have a read through this article to find out about tips, tricks and common issues when cultivating a cut Christmas tree. 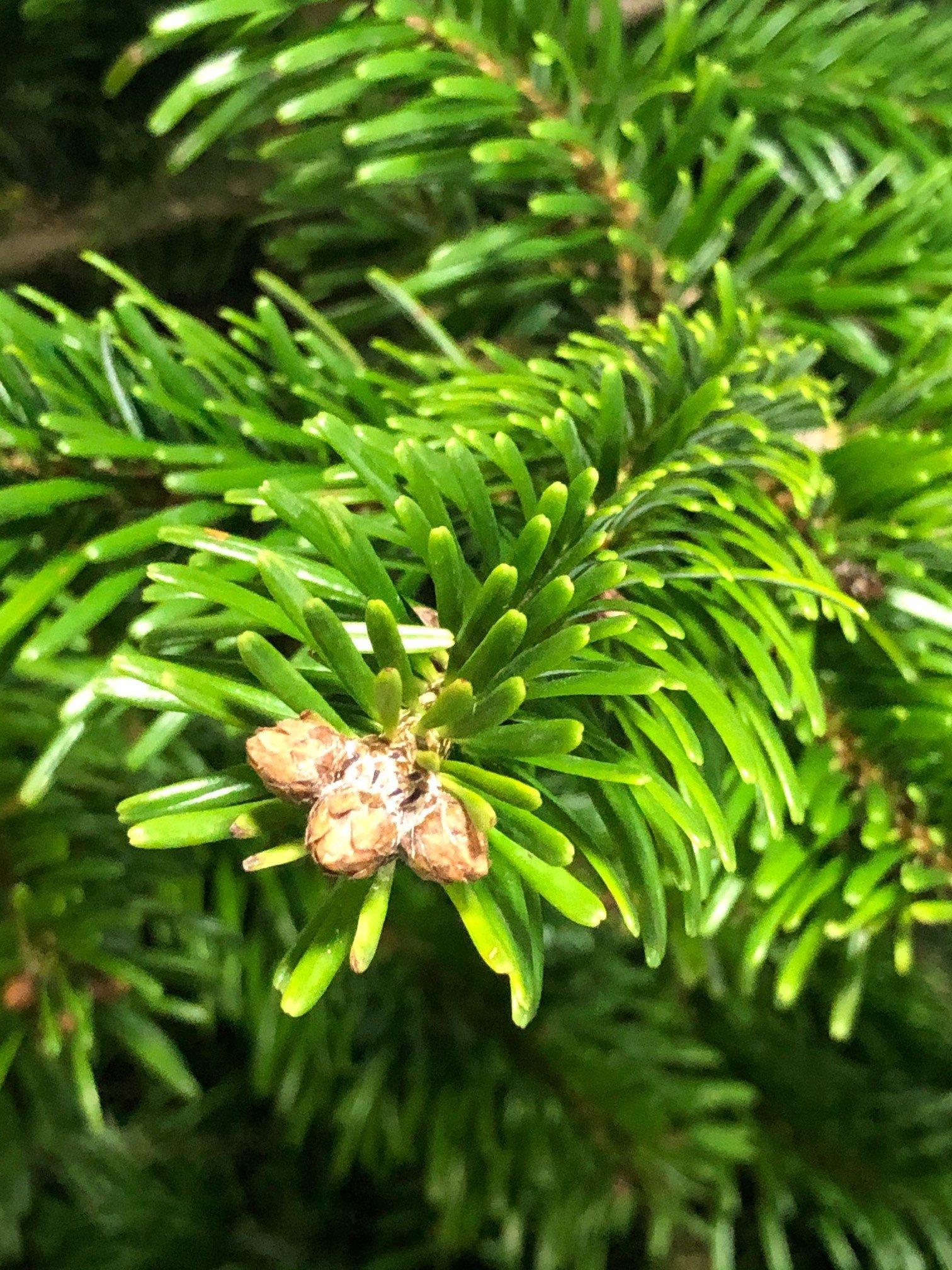 Nordmann Firs are the most popular cut tree in Europe and among the easiest to maintain. 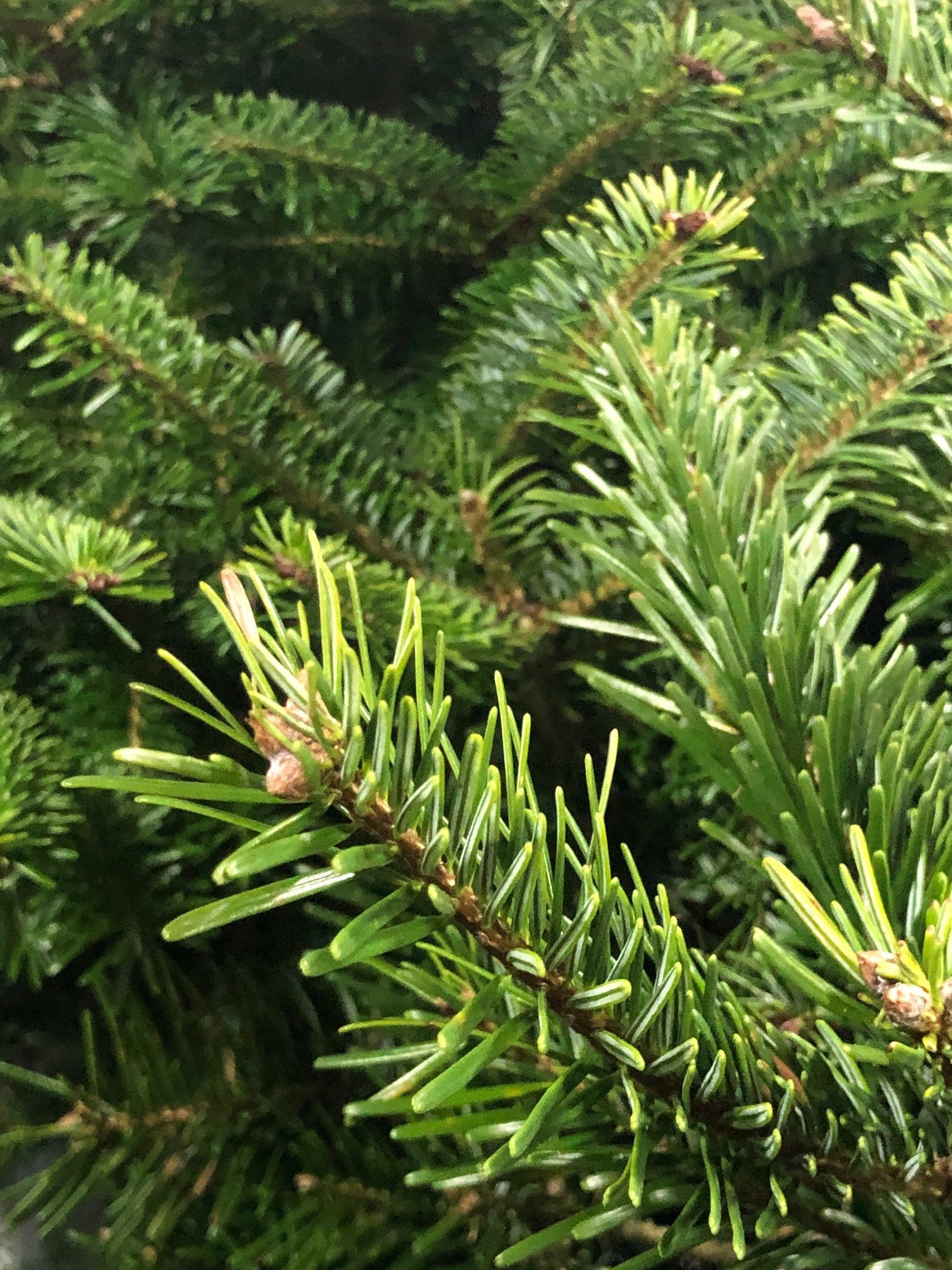 The Fraser & Douglas Fir will hold its needles for the longest, with the latter being the least sharp on the market. 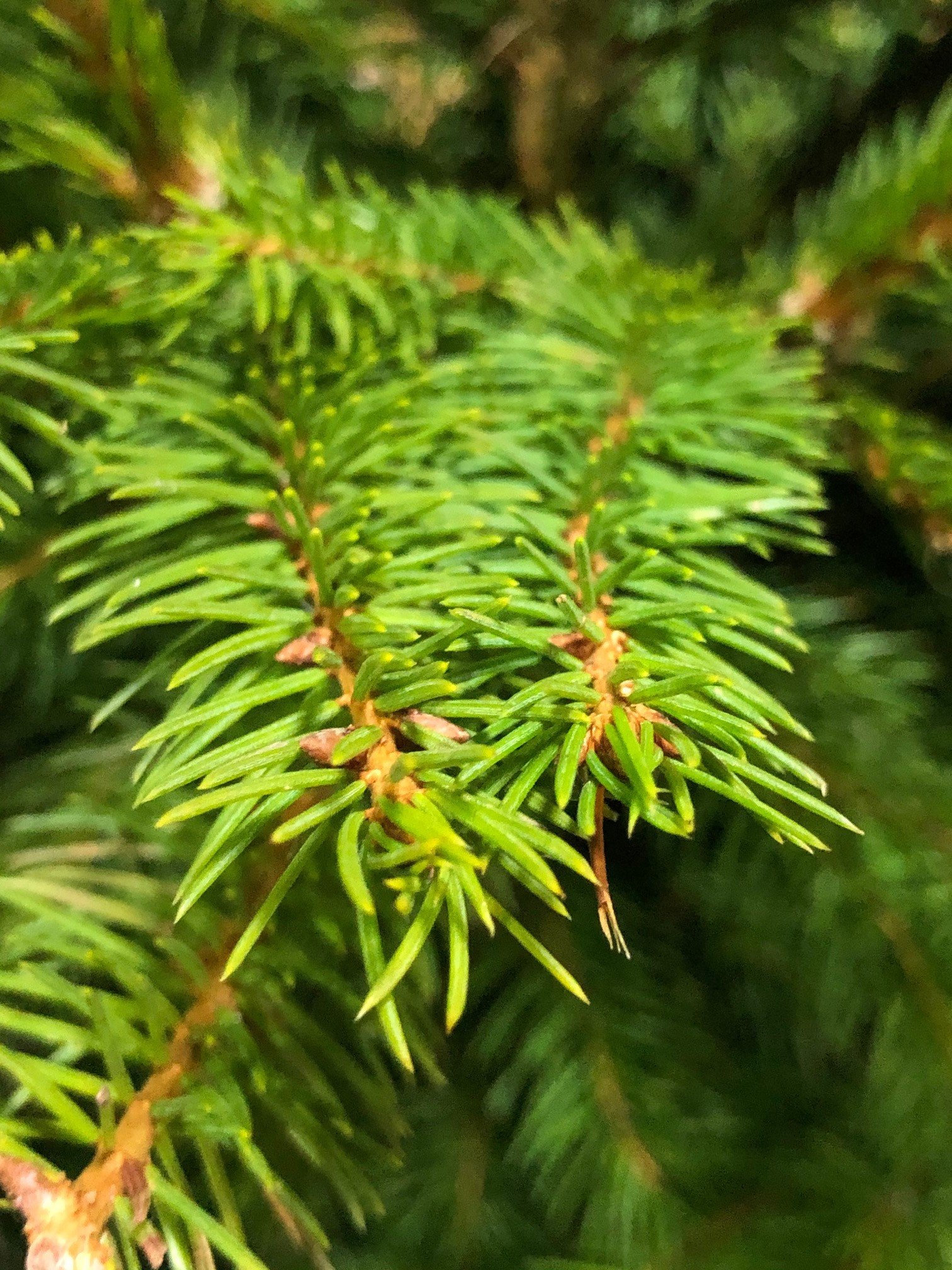 The Norway Fir is the most difficult to maintain and has the quickest needle-drop out of the selection. It's still widely purchased as it closely resembles the true Christmas tree. 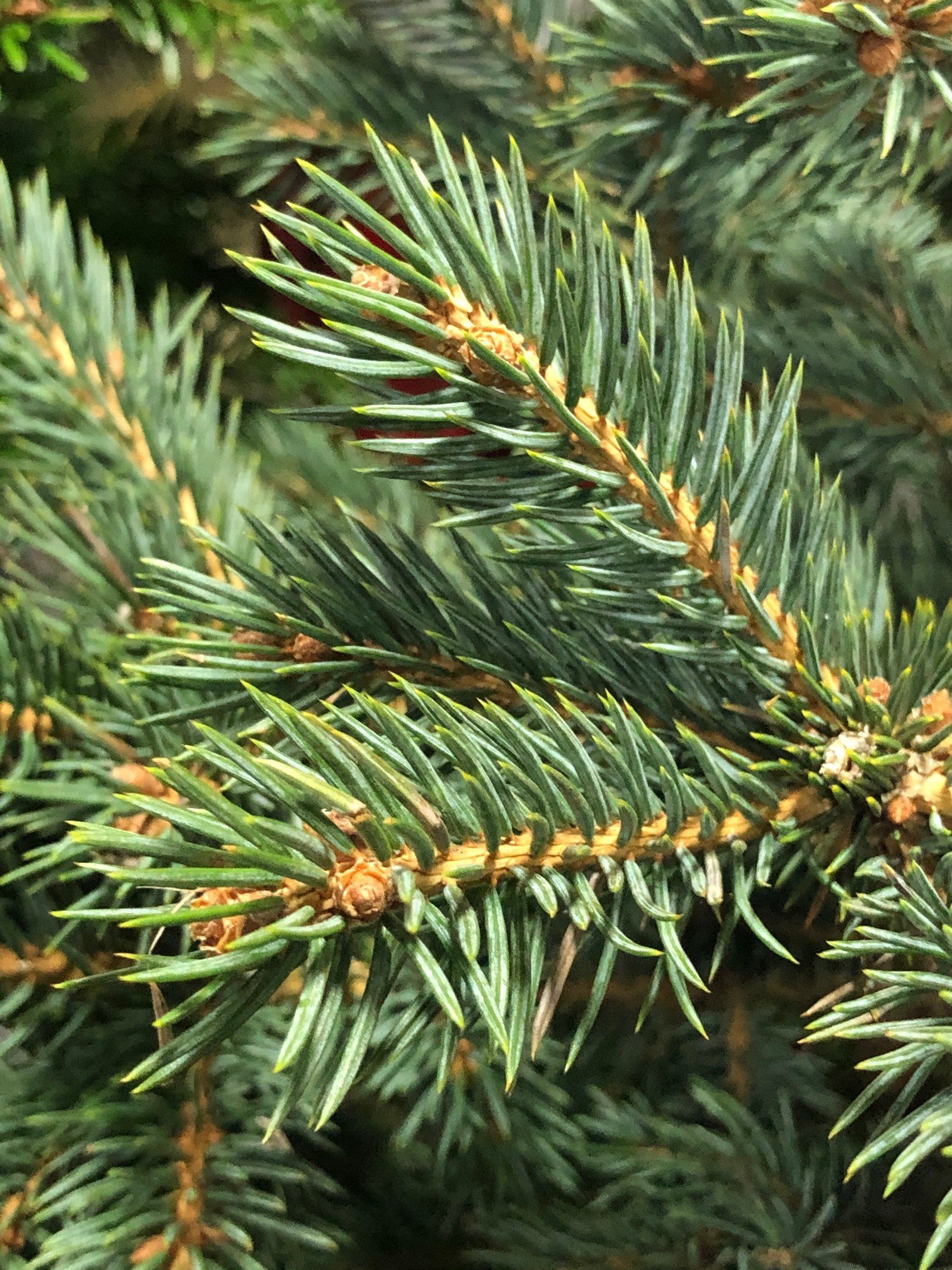 Blue Spruces are the smallest, but most recognisable due to its glaucous appearance. It's needle-drop rate and care difficulty is mid-ranged, lasting several weeks once cut. N.B. - Most specimens are sold in pots but are relatively cheap compared to their larger counterparts.

Keep the stump submerged in at least 8cm (3 inches) of water throughout its stay in your home. This will not only keep the tree hydrated but will also prevent excessive needle drop. Replace the water weekly and introduce a fertiliser high in nitrogen to prolong the tree's health. Christmas trees must be sat in water 24/7 to avoid drying out.

Average room humidity will not be enough for a Christmas tree. Radiators will be on over-drive during the winter to keep us warm, which in turn will come at the cost of dry air. Despite the ideal humidity level for humans being around 40%, cut trees require almost double that. Introduce either a humidity tray, an artificial humidifier or set some bowls of water underneath the tree's spread to keep the surrounding moisture high. If you can't follow this advice, at least place the tree at least four metres away from an operating heat source as a bare minimum.

Direct sun should be avoided at all costs. Although sunlight is highly beneficial for the tree in the wild, even a slither of its rays will result in needle-loss and dehydration. The ideal location would be in a room that's slightly cool and offers bright, indirect light away from radiators.

Regardless of people's views, a well-nourished tree will always thrive better than with those grown in just water. There are a few different options to choose from, including 'Sachets' sugar-syrup and even aspirin. ukhouseplants recommends a seaweed-based fertiliser, as it contains a high level of nitrogen, a vital ingredient for the development and preservation of the tree's foliage.

How to Store the Tree if it's not used Indoors Immediately

For those who have bought the tree too early, don't panic. There are several ways in which you can store and preserve it without the loss of needles.

Firstly, sit the base in water. Your tree will be loosing stored energy and water, fast - so it's highly essential to keep it thoroughly hydrated. Keep the stump submerged around 8cm in water with a fortnightly supplement of feed to keep its energy high.

Store the tree where there is adequate light and an absence of temperatures that'll dip below 3°C (37°F). Keeping the tree cool over this period is vital to reduce needle loss and a dehydrated stem. Never situate it in frosts, direct sunlight, or in a dark setting as all three will result in a decline in health.

The final tip is to remove the bottom of the trunk before putting the decorations on it. A thin layer of solidified resin will develop along the trunk's wound, inhibiting water-absorption. Use a clean saw and remove the bottom 4cm (2 inches) - cutting directly horizontal to maximise water intake for its time indoors.

The difference between freshly cut
and ageing trunks. Copyright: merrychristmastrees.com.au

Under-watering is the biggest issue with cut trees. Its base must not sit in a dry container under any circumstances throughout the festive period. Change the water weekly to ensure nasty pathogens aren't attacking the tree's base.

The tree's base must be cut at least once during its stay at your home.  A thin layer of dried-resin will block water-absorption in the trunk, resulting in a dehydrated tree that'll quickly drop its lower needes. Christmas Tree Farms should, in theory, cut the bases correctly, but always make sure that yours has a clean, horizontal cut for maximum water intake. Although its best to trim off the bottom before the application of decorations, you can do this at any stage in the festive period.

Too much light should be avoided at all costs. Even though the pines are exposed to sunlight in their natural environment, avoid direct sunlight to preserve its stored water. Heightened levels of photosynthesis will require more water to convert the light into energy, thus drying it out quicker.

Lower needle loss or browning is typically caused by too little moisture in the air, or in the trunk's reservoir. As mentioned above, cut trees must have an abundance of water in the reservoir to avoid drying up. It should ideally have a moist surrounding too. Placing it in direct sunlight or within three metres of an operating radiator will quickly lead to the browning and loss of needles. For those displaying signs of this, remove the affected areas and introduce either an artificial humidifier, humidity tray or a couple of bowls of water beneath the tree's spread.

Despite the importance and decorations of evergreen conifers since 332 BC, the use of Christmas trees domestically can be dated back to the sixteenth century in Germany. During a sermon, a man named Martin Luther was amazed by the stars twinkling behind evergreens and came up with the idea of candle-lit trees indoors. Although Christmas trees were first introduced to America in the seventeenth century, many Christians didn't accept the concept of Pagan decorations inside the home, until an illustration of Queen Victoria alongside a decorated tree was released. America and Britain soon fell in love with the idea, signalling the start of the tradiion.

3°C - 20°C (37°F - 68°F). Cut Christmas trees are best located in cooler rooms. Never situate within four metres of an operating heat source and in the view of direct sunlight due to the heightened temperature and dry air. Although they can withstand frost, be sure to avoid excess cold temperatures below 3°C for the prevention of plant death.

If uncut, Christmas trees can grow up to 12m in height, with the ultimate height taking around 15 - 20 years. A cut specimen will grow very little once separated from the rootstock.

Remove any yellow or brown needles with a clean pair of scissors or secateurs; be careful of dripping sap which can stain and ruin carpets.

Christmas Trees can be propagated via 12cm stem cuttings in early winter. Take lateral growths that have a slightly wooded base, but still juvenile to bend. Be sure to use a clean pair of scissors or secateurs, empathising a clean cut to avoid damaging the wound. Remove the bottom half of the needles and dip the wound in rooting hormone and position them vertically half-deep in a sandy, well-draining potting mix. The ideal compost is a Seed & Cutting potting mix, but multipurpose soil with some added grit and perlite is also acceptable. Provide a warm location (around 18°C, 64°F) that offers high humidity and bright, indirect light. It's important to have a good level of humidity as this will reduce the amount of water-loss via respiration in the needles. Wrap the potted cuttings in a transparent bag or plastic box to lock in air moisture. Open the bag/box every few days for an hour to avoid the spread of fungus spores that can destroy a whole batch. Remove any dead or decaying matter and avoid water-logging and persistent droughts. Once the cuttings have 2cm roots, safely place them in 8cm pots that have adequate drainage - the rooting process can take between five weeks and ten months, so patience is key! Always avoid direct sunlight and low humidity/temperatures for the best results. You cannot root the tree as a whole.

Common diseases with cut Christmas Trees are blackleg, powdery mildew, leaf-spot disease and botrytis (grey mould). Most diseases are caused by excess moisture on the foliage, especially with those grown in dark locations. Keep an eye out for thrips, aphids, mealybugs, root mealybugs and scale. For more info on how to address any of these issues, hit this link. Identifying Common Houseplant Pests & Diseases

Most Garden Centres & Online Stores. Always choose the healthiest specimen that has a clean, horizontal cut along the bottom of the trunk. If there are signs of needle drop or poor cultivation, search for another tree.