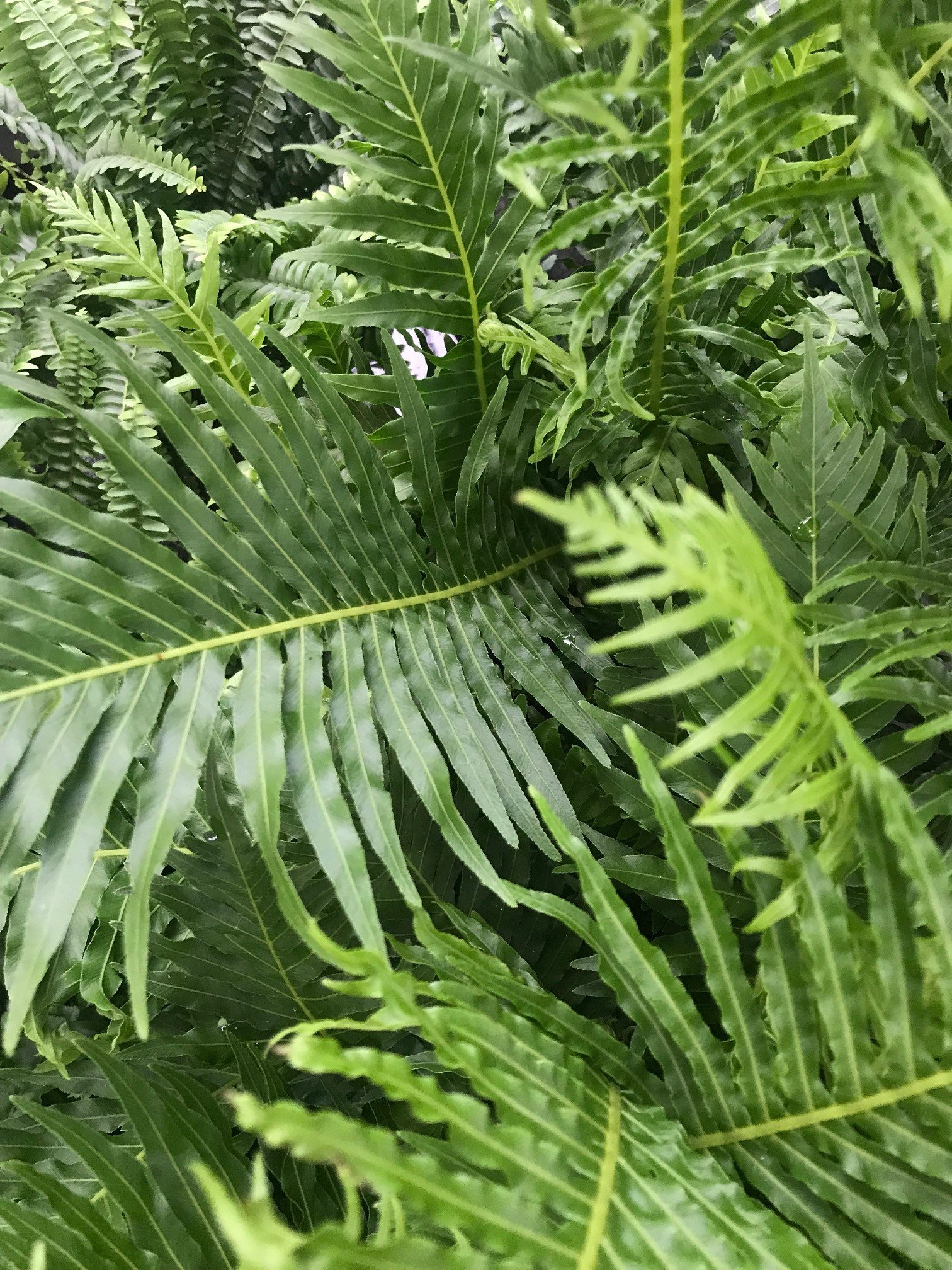 Persistent under-watering or direct sunlight will cause greying of leaves and crisping foliage that could easily spell the end for juvenile specimens. Less severe cases can be controlled by cutting away the affected areas and presenting a fern-friendly environment that consists of indirect light, moist air and good soil moisture. If established fronds and leaves start to look a little unfulfilled, you have the choice to cut the affected fronds back to the soil line entirely. This method will promote new shoots uncoiling from the underground rhizomes, thus rejuvenating the visuality of the fern. Patience is key though; pruning the foliage back to the soil line will make it appear very sparse, and could take up to two or three months to re-develop.

Please note that this can only be performed on Nephrolepis, Adiantum, Blechnum, Polystichum & Davallia.

An under-humid room will not favour ferns in the slightest. Moist jungle air and an absence of dry soil are what keeps this genus happy, so low humidity will lead to browning leaf tips and weak growth. You can either mist the foliage every other day or introduce a humidity tray to keep life manageable.

Distinguishing whether or not your fern has root rot is quite tricky without taking the plant out of the pot as their root systems are usually thin, brown and non-tuberous - the typical signs of root rot with other species. Think back to its previous cultivation: has it endured waterlogged soil or has it been placed in a too dark location with no drainage? If the answer is yes to both to those questions, with the fern is sporting a yellowed mottled look, investigate further to prevent a total decline.

Symptoms of root rot include stunted or no growth, severe wilting, rapidly yellowing leaves, leaf/flower loss, and a rotten base. Once root rot sets in, sections of the systems will become brown and mushy that will soon fail to collect vital nutrients in the soil for the plant's health. To combat this, take the plant out of its plastic pot and inspect the root ball. Remove affected roots that are brown or mushy, and replace some of the waterlogged soil with houseplant soil as the original soil may contain harmful pathogens that can further destroy the roots. Try sprinkling some cinnamon onto the healthy roots to avoid further bacteria growth.

You mustn't finger the remaining healthy parts of the root system too much as transplant shock will kill your plant. The final step is to change both your watering habits and location. Depending on the plant, remember to only water once it requires hydration and not because the label says "once a week". Although this is generally the frequency for hydration, each plant is different and so too is its location (e.g. darker places will result in fewer irrigations). Once you get a feel for when your plant needs another water, then, and only then can you determine a scheduled rota. The final step is the location - a change is clearly in the air, so move your plant to a brighter spot that offers almost no direct sunlight.

A rotten core is usually accompanied by an array of collapsing fronds that harbour yellowing leaves. The common culprits of a rotten base include an excess of water in between hydration, too little light, standing water beneath its pot, a pot that has an absence of drainage holes, or an incorrect soil medium used during a repot. Unfortunately for ferns, this can, and often will lead to death. This is because the plant's body is harboured just below the soil line, with tuberous rhizomes acting like the stems. If the rhizomes start to rot, it's similar to a collapsed or rotten stem which will spell the end of its life. Although propagation can save it from death (see each individual fern article for further information), it's less likely to survive due to the heightened bacterial or fungal levels found in either the soil or within the plant.

Correcting the amount of light is essential for the fern's health. Locations that are too dark will cause yellowed central leaves, whereas areas that offer intense direct light will easily scorch the leaves and permanently damage the individual fronds. As mentioned above, darker locations tend to favour ferns as they predominantly grow under shaded trees or in swamps. Avoid direct sunlight if you're a forgetful gardener, and always provide a humid setting which leads onto the final tip.